The brave Syrian Arab Army, together with Russians, Iranians and Hezbollah allied friends, continue the advance to regain the entire Syrian territory from the hands of the foreign-backed mercenary-terrorist, hit their positions and dens all across the country, destroying their centers and equipment, including vehicles and heavy weaponry, eliminating many of their members.

The Syrian Arab Army and the Syrian Armed Forces continued their military operations against armed terrorist groups all over the country, establishing control on a hill in Deir Ezzor and killing tens of terrorists in other Syrian regions.

A Syrian Arab Army unit established control over Um Abboud hill in the southwestern countryside of Deir Ezzor province after eliminating the last gathering of ISIS terrorist there.

Local Syrian Agency reporters in Deir Ezzor said that an army unit carried out on Saturday an operation against ISIS terrorists’ gatherings and fortifications in Um Abboud hill, establishing complete control over it after killing dozens of the terrorists.

Army units also clashed with ISIS terrorists on the axes of al-Maqaber and al-Erfi neighborhood in Deir Ezzor city, inflicting heavy losses upon the terrorists. 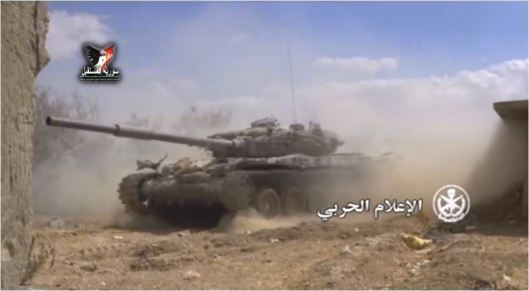 The Syrian Army Air Force targeted the so-called Jaish al-Fateh gatherings and movement axes in the countryside of Hama and Idleb provinces.

It inflicted heavy losses upon the terrorists of Jaish al-Fateh in personnel, destroying their positions and tens of their vehicles; score are armored and equipped with machine guns.

In the southern and eastern countryside of Idleb Province, the army air force targeted Jaish al-Fateh terrorist organization’s positions and movement axes in al-Tamanaa, al-Mutawasetah, Maarat al-Nua’man and east of khan Shaikhoun, killing a number of its members, according to the source.

A military source announced on Friday that the army units retook a number of buildings in Sulaiman al-Halabi area in Aleppo city from the terrorists after clashing with them.


The buildings included Aleppo Club, the Electricity Department and the garage, said the source, noting that the army units are chasing down the terrorists who fled the area.

Scenes of the battle from the areas,
now controlled by the Syrian army,
in the neighborhood of Bustan az-Zahra
and Bustan al-Qaser districts, East Aleppo pocket

The Syrian Air force carried out airstrikes on the supply routes and movements of terrorist organizations in the northern countryside of Aleppo, killing a number of terrorists and destroying a number of their armored vehicles and vehicles equipped with machineguns in Maarit al-Artik, Kafr Hamra and Anadan.

Later, a military source said to local Syrian reporters that an army unit destroyed 10 motorbikes rigged with explosives used by ISIS terrorists who had attempted to attack a military position in the surroundings of the Air Force Academy in Aleppo.

Army units hit gatherings of ISIS terrorists who were carrying out fortification and tunnel-digging works in the villages of Barad and al-Qassr in the countryside of the southern Sweida province, leaving a number of them dead or injured and destroying their fortifications, according to the military source.

Army units destroyed positions, barricades and fortified sites for Jabhat al-Nusra terrorists as they targeted their gatherings in al-Bado quarter and al-Kark neighborhood in Daraa al-Balad area in the southern Daraa province.

Another gathering was hit southwest of the bridge of al-Ghariyeh al-Gharbiyeh village, 20 km northeast of Daraa city.

The Syrian Air Force destroyed tanks and vehicles for Jaish al-Fatah, killed a number of its members and injured many others in the towns and villages of Atshan, Skik, al-Shatha, al-Tlisia, al-Kbarya and Soran in the northern countryside of Hama.

The Syrian Air Force launched airstrikes on the movement axes of Jaish al-Fatah to the north of Saraqib in Idleb northern countryside.

Many of the terrorist organization’s members were killed and many others were injured during the airstrikes.

In the southern countryside of Idleb, a number of vehicles for Jabhat al-Nusra and Jund al-Aqsa were destroyed and many of their members were killed in al-Tamania town and Jirjinaz village.

The Syrian Air Force launched airstrikes on ISIS gatherings and dens in the area surrounding Shaer, Talit al-Sawana and Hoisis in the northwest countryside of Tadmour (Palmyra) in Homs, destroying a number of vehicles.

The Syrian airstrikes also targeted the fortified positions of ISIS in Arak village to the east of Tadmour, destroying two of their sites, killing number of terrorists and injuring many others.