The brave Syrian Arab Army, together with Russians, Iranians and Hezbollah allied friends, continue the advance to regain the entire Syrian territory from the hands of the foreign-backed mercenary-terrorist, hit their positions and dens all across the country, destroying their centers and equipment, including vehicles and heavy weaponry, eliminating many of their members.

(2 October 2016) ~ Syrian Army General Command of the Syrian Arab Army and Syrian Arab Armed Forces called on all gunmen in the eastern neighborhoods of Aleppo city to leave these neighborhoods for the locals to be able to lead a normal life, the Command said in a statement on Sunday.

The commands of the Syrian and Russian forces pledge a peaceful exit and providing necessary support for the gunmen willing to leave, the General Command said.

On July 28, the Syrian government, aided by the Russian forces, started a large-scale humanitarian operation in Aleppo city to help civilians who were taken hostage by terrorists, in which corridors were opened for civilians and gunmen willing to lay down arms and leave the eastern neighborhoods of the city. 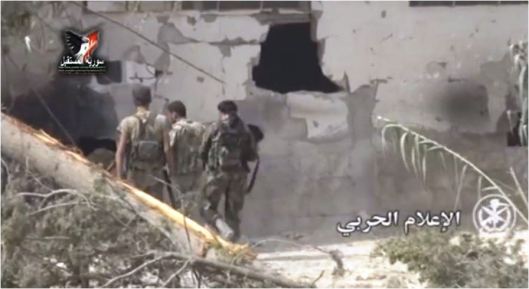 (2 October 2016) ~ More terrorist positions are being targeted by the Syrian army units and the Syrian Air Force in different areas and provinces, where many terrorists are getting killed and their vehicles and equipment destroyed.

Syrian Army units in cooperation with the supporting forces established control over al-Kindi Hospital completely and the western vicinities of al-Shqeif area, al-Hamra hill and 16 farms to the southwest of Handarat camp in Aleppo, killing scores of the terrorists and haunting down the fleeing terrorists in the area.

Units of the Syrian army, in cooperation with popular defense groups, established control on a number of farms and buildings in al-Darkhabiya in western Ghouta in Damascus countryside.

The army’s progress came after fierce clashes with terrorists as the operations ended up with the killing of scores of terrorists while the others have fled.

A Syrian army unit destroyed a number of motorcycles and a car belonging to terrorists in the vicinity of the fourth intersection on al-Sad road in Daraa al-Mahatta area in Daraa city, a military source said.

Another army unit killed a number of terrorists, mostly from Jabhat al-Nusra, and destroyed their weapons and ammunition in al-Yadouda town in the countryside of Daraa.

A Syrian army unit directed intensive strikes against Jund al-Aqsa terrorists’ gatherings and axes of movement in Morek town in Hama northern countryside, killing a number of the terrorist organization’s members, among them four commanders.

The army’s operations led to the destruction of three vehicles and the death of 20 terrorists from Jund al-Aqsa in the area surrounding Maan and Souran town.

A Syrian army unit killed 6 terrorists and wounded 10 others from Jund al-Aqsa in Taibet al-Imam town.

Army units accurately hit the supply routes and axes movements for Jund al-Aqsa, Jaish al-Naser and Ahrar al-Sham in Maarkabeh village, Kafr Zita city and al-Awzar area, killing many of them and destroying their vehicles.

An army unit clashed with terrorist groups which infiltrated to the area surrounding al-Raiyeh Mountain in Hama northern countryside, killing several terrorists while the rest fled away.

Units of the Syrian army destroyed gatherings and vehicles for the terrorist organizations in the villages of Za’afaraneh, Izz Eddin, Talbeisah, Um Sharshouh, al-Msherfeh and al-Bardeh in Homs countryside.