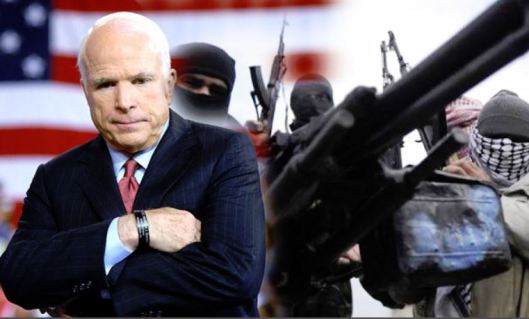 (SANA) ~ The General Command of the Army and the Armed Forces said the supporters of international terrorism are trying to secure safe routes and corridors for the ISIS terrorists who are fleeing Iraq’s Mosul to cross into Syria.

In a statement on Tuesday, the Command said a “malicious scheme” by the backers of international terrorism, mainly the US and Saudi Arabia, is unfolding and becoming clear after military operations were launched by the brotherly Iraqi army and its supporting forces to liberate Mosul city from the gangs of ISIS terrorist organization.

The scheme, the statement explained, is to provide safe routes for the groupings of ISIS terrorists who are reeling under the Iraqi army’s strikes in Mosul-Iraq’s second largest city-to cross the border into the Syrian territory.

The aim of providing such corridors, it added, is to provide protection to the terrorists on the one hand and boost the terrorist presence inside the Syrian territory on the other hand in a bid to impose a new military reality in the eastern region in the direction of Deir Ezzor, Raqqa and Palmyra.

The General Command of the Army stressed in its statement that the battle of liberating Mosul and the whole territory of Iraq from terrorism is its own battle.

The Command warned that it would consider any attempt at crossing into its border as “an attack on the sovereignty of the Syrian Arab Republic,” and that those who attempt to do that would be regarded as terrorists and would be dealt with with all the forces and means at its disposal. 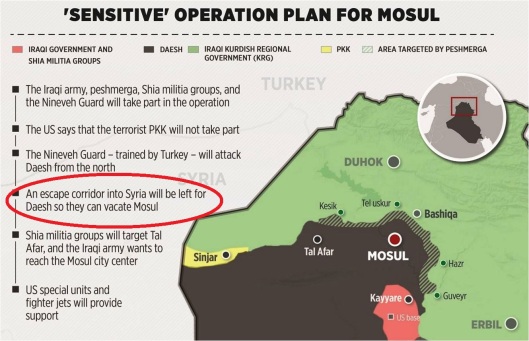 US, Saudi Arabia Allow Daesh to Flee From Mosul to Syria

(Sputnik) ~ The US-led coalition plans to entail securing roads and safe passages into Syria to allow the terrorists consolidate their presence and create “new battleground realities” in eastern Syria.