Islamist militants have shelled a ‘humanitarian corridor’ set up to allow civilians to escape from eastern Aleppo, RIA Novosti reported. The shelling came amid a ceasefire declared the by Syrian military and Russian Air Force.

At least six mortar shells were fired into the ‘humanitarian corridor’ by militants in the Bustan al-Qasr neighborhood of eastern Aleppo. Small arms fire was also directed at a Syrian Army checkpoint, RIA Novosti reported on Thursday.

The exit from the corridor is approximately 200 meters from Islamist positions and apparently within reach of their small arms and mortar fire, according to the report.

Reports on civilian casualties were not immediately available. The Aleppo residents, some sick and wounded, were trying to flee Islamist-controlled eastern Aleppo with an escort from UN and Syrian Red Crescent personnel.

Meanwhile, other ‘humanitarian corridors’ on Aleppo’s Castello Road remain safe, and the evacuation of civilians is expected to begin shortly, with buses and ambulances on standby ready to go, RIA Novosti reported.

The ceasefire took effect on Thursday at 8am local time and the Russian military said earlier in the day that it was ready to extend the pause for three hours upon the request of humanitarian organizations assisting civilians. The Syrian Army and Russian Air Force have suspended airstrikes against militant positions since Tuesday to pave the way for the ceasefire.

There are eight corridors in eastern Aleppo, two of which have been established for rebels willing to leave, who would be allowed exit the city with their arms. The six others are meant for civilians and humanitarian aid deliveries. Syrian forces have already pulled back from those routes, while Russian and Syrian aircraft will stay at least 10km away from Aleppo.

The Russian military added that everyone leaving the area will be monitored by web cameras and surveillance drones. Aleppo residents were informed of the possibility to escape the area by airdropped leaflets, loudspeakers, text messages, and the internet.

Later on Thursday, Defense Minister Sergey Shoigu called upon countries with influence over the ‘moderate’ rebels in Syria to persuade them to leave the city. In the meantime, militant forces continue to receive arms deliveries from abroad, including sophisticated US-made TOW anti-tank missiles, according to Russia’s General Staff.

The US and major European countries have been accusing Russian and Syrian forces of allegedly committing war crimes in Aleppo, but Moscow maintains that Islamist militants have been deliberately mixing with the civilian population in order to use them as human shields.

The UN, however, stood unenthusiastic of the ceasefire. Jan Egeland, the organization’s humanitarian adviser, said the UN wanted the ceasefire to be extended until Monday, according to Reuters. He added that the UN was working “round the clock” to obtain necessary permits from the Syrian government to deliver food into besieged eastern Aleppo. 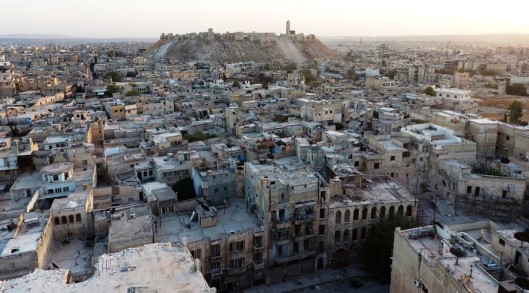 Russia is extending by three hours the humanitarian pause in Aleppo, Syria, planned for October 20, citing requests from international humanitarian organizations. Two of the eight corridors that are to open will be meant for use by the rebels.

“On October 20, starting at 8am, a humanitarian pause is to be introduced in Aleppo to allow civilians to escape and sick and injured people to be evacuated, and for militants to leave the eastern part of the city,” Lt. Gen. Sergey Rudskoy said.

He added that the people leaving eastern Aleppo would be monitored in real time via web cameras and surveillance drones.

The footage will be broadcast on the Russian Defense Ministry’s website.

The general said it took measures to inform Aleppo residents of the opportunity to leave the city by airdropped leaflets, loudspeakers, mobile phone text messages and through Internet.

1 thought on “Despite the humanitarian corridor and the ceasefire opened by Syrian military and Russian Air Force, the ‘moderate’ terrorist gangs [protected by U.S. regime] are firing on civilians fleeing east-Aleppo ~ [Reports, Videos]”