Terrorists shelling has claimed the lives of at least six civilians and injured many others on the Aleppo University campus, which houses families displaced by the Syrian conflict.

The attack on the Aleppo University area was conducted on Wednesday, when a number of mortar shells and other self-propelled rounds fired by militants landed near the campus, which houses both students and refugees.

According to Aleppo Police Command, cited by SANA news agency, all of the victims were either students or members of displaced families and locals. 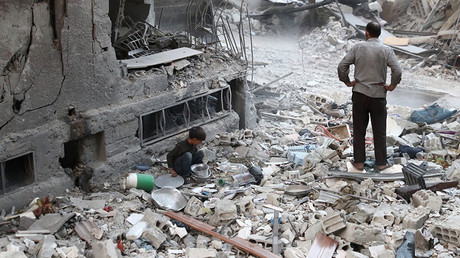 Earlier on Wednesday, three women and one man were injured by reactive munitions shelling from rebel forces in the neighborhoods of al-Hamadaniyeh and New Aleppo.

The attacks, apart from inflicting heavy civilian casualties, have reportedly inflicted significant damage to buildings and other properties.

Jihadist militant groups have been shelling residential areas of Western Aleppo almost on a daily basis since the Syrian Army with the support of Russia and other allies surrounded Al-Nusra Front terrorists and allied militants in Eastern Aleppo, which has become a jihadist stronghold.

The West has accused Moscow and Damascus of causing civilian casualties in the area, while largely ignoring the atrocities committed by jihadists.

The Russian and Syrian air forces have suspended their activities in Aleppo since October 20, keeping a distance of at least 10km from the city.

The surrounded jihadists, in the meantime, are preventing civilians from exiting the war zone through humanitarian corridors provided by the Russian and Syrian military.

Jihadist groups launched a massive offensive in the beginning of November from outside of the city in an attempt to break the blockade on the trapped terrorists, but have so far failed.