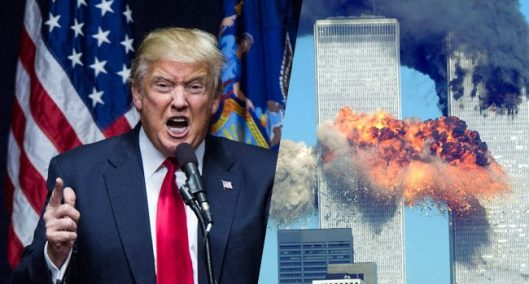 Donald Trump’s plans for his first 100 days in office are raising eyebrows around the world, but of all the items on his agenda it is the reopening of the 9/11 investigation that will provide the greatest earthquake for the establishment.

Trump believes that 9/11 has not been properly investigated and he plans to get to the bottom of it. “First of all, the original 9/11 investigation is a total mess and has to be reopened,” Trump said.

The election of Donald Trump has rocked the establishment and things are only going to get rockier for them during his first term. There is a reason George W. Bush didn’t vote for Trump in the election, leaving the presidential line blank and voting Republican down-ballot. Trump has pledged to investigate 9/11 in a way it has not been investigated before.

For the first time 9/11 will be investigated by someone who isn’t part of the establishment, with skin in the game and plenty to lose.

“First of all, the original 9/11 investigation is a total mess and has to be reopened” Trump announced to supporters. “How do two planes take out three buildings in the same day? I never got my head around the fact that nothing is mentioned about the destruction of Building 7 in the 585 page document,” he explained, talking about World Trade Center 7 which also collapsed – inexplicably – during the September 11 attacks.

“Why did the administration at the time not take legal means against Saudi Arabia? Weren’t 19 of the high-jackers from Saudi Arabia? Americans deserve answers and I will definitely request a new investigation so that this horrible tragedy never happens again.”

Donald Trump and the 9/11 Truth movement

While Trump might be railing against the establishment in reopening the 9/11 investigation, he has received support on this issue from a number of public personalities who have demanded the case be revisited – and not behind closed doors.

Former Senator Bob Graham has been demanding a new, transparent investigation “For years I have been campaigning for the release of the 2002 Joint Congressional Intelligence Committee 9/11 Inquiry’s report, to no avail” explains the former Governor of Florida.

“These missing pages point to the direct involvement of the government of Saudi Arabia. Why are these being kept secret? Who has to gain from these games of secrecy?” he asks.

“I have read these documents myself and if the American public knew what was in these documents, there would be a revolution tomorrow in the streets of America” he acknowledged during a radio interview.

“Americans deserve to know the truth” he concluded, visibly angered by the whole affair.

Since 2002, the release of a number of 9/11 Commission Report documents is hindered because they are congressional records, hence they are exempt from the Freedom of Information Act (FOIA).

The long withheld 28 pages were partially released to the public this year – heavily redacted – and the Saudi government claimed the release proved they were not responsible for supporting or financing the attacks. But it’s not as simple as that. There are direct ties to the Saudi hierarchy in the 28 pages. There are a lot of questions that need answering, and they were never going to be addressed under a Clinton presidency with all her ties to Saudi Arabia.

But with President Trump’s executive powers, everything has changed. The establishment are on edge. More than half the country doesn’t believe the official version of what happened that day. There is now a renewed belief that this biggest of lies and cover ups is about to be dismantled.

The establishment did all it could to destroy Trump the outsider’s election chances at election. Now they are on edge.

Defeated Democratic presidential candidate Hillary Rodham Clinton is not about to «go quietly into that good night». On the morning after her surprising and unanticipated defeat at the hands of Republican Party upstart Donald Trump, Mrs. Clinton and her husband, former President Bill Clinton, entered the ball room of the art-deco New Yorker hotel inmidtown Manhattan and were both adorned in purple attire. The press immediately noticed the color and asked what it represented. Clinton spokespeople claimed it was to represent the coming together of Democratic «Blue America» and Republican «Red America» into a united purple blend. This statement was a complete ruse as is known by citizens of countries targeted in the past by the vile political operations of international hedge fund tycoon George Soros.

The Clintons, who both have received millions of dollars in campaign contributions and Clinton Foundation donations from Soros, were, in fact, helping to launch Soros’s «Purple Revolution» in America. The Purple Revolution will resist all efforts by the Trump administration to push back against the globalist policies of the Clintons and soon-to-be ex-President Barack Obama. The Purple Revolution will also seek to make the Trump administration a short one through Soros-style street protests and political disruption.

It is doubtful that President Trump’s aides will advise the new president to carry out a diversionary criminal investigation of Mrs. Clinton’s private email servers and other issues related to the activities of the Clinton Foundation, especially when the nation faces so many other pressing issues, including jobs, immigration, and health care. However, House Oversight and Government Reform Committee Chairman Jason Chaffetz said he will continue hearings in the Republican-controlled Congress on Hillary Clinton, the Clinton Foundation, and Mrs. Clinton’s aide Huma Abedin. President Trump should not allow himself to be distracted by these efforts. Chaffetz was not one of Trump’s most loyal supporters.

America’s globalists and interventionists are already pushing the meme that because so many establishment and entrenched national security and military «experts» opposed Trump’s candidacy, Trump is «required» to call on them to join his administration because there are not enough such «experts» among Trump’s inner circle of advisers. Discredited neo-conservatives from George W. Bush’s White House, such as Iraq war co-conspirator Stephen Hadley, are being mentioned as someone Trump should have join his National Security Council and other senior positions.

George H. W. Bush’s Secretary of State James Baker, a die-hard Bush loyalist, is also being proffered as a member of Trump’s White House team. There is absolutely no reason for Trump to seek the advice from old Republican fossils like Baker, Hadley, former Secretaries of State Rice and Powell, the lunatic former U.S. ambassador to the United Nations John Bolton, and others. There are plenty of Trump supporters who have a wealth of experience in foreign and national security matters, including those of African, Haitian, Hispanic, and Arab descent and who are not neocons, who can fill Trump’s senior- and middle-level positions.

Trump must distance himself from sudden well-wishing neocons, adventurists, militarists, and interventionists and not permit them to infest his administration. If Mrs. Clinton had won the presidency, an article on the incoming administration would have read as follows:

«Based on the militarism and foreign adventurism of her term as Secretary of State and her husband Bill Clinton’s two terms as president, the world is in store for major American military aggression on multiple fronts around the world. President-elect Hillary Clinton has made no secret of her desire to confront Russia militarily, diplomatically, and economically in the Middle East, on Russia’s very doorstep in eastern Europe, and even within the borders of the Russian Federation. Mrs. Clinton has dusted off the long-discredited ‘containment’ policy ushered into effect by Professor George F. Kennan in the aftermath of World War.

Mrs. Clinton’s administration will likely promote the most strident neo-Cold Warriors of the Barack Obama administration, including Assistant Secretary of State for European and Eurasian Affairs Victoria Nuland, a personal favorite of Clinton».

President-elect Trump cannot afford to permit those who are in the same web as Nuland, Hadley, Bolton, and others to join his administration where they would metastasize like an aggressive form of cancer. These individuals would not carry out Trump’s policies but seek to continue to damage America’s relations with Russia, China, Iran, Cuba, and other nations.

Not only must Trump have to deal with Republican neocons trying to worm their way into his administration, but he must deal with the attempt by Soros to disrupt his presidency and the United States with a Purple Revolution

No sooner had Trump been declared the 45th president of the United States, Soros-funded political operations launched their activities to disrupt Trump during Obama’s lame-duck period and thereafter. The swiftness of the Purple Revolution is reminiscent of the speed at which protesters hit the streets of Kiev, the Ukrainian capital, in two Orange Revolutions sponsored by Soros, one in 2004 and the other, ten years later, in 2014.

The Soros-financed Russian singing group «Pussy Riot» released on YouTube an anti-Trump music video titled «Make America Great Again». The video went «viral» on the Internet. The video, which is profane and filled with violent acts, portrays a dystopian Trump presidency. Following the George Soros/Gene Sharp script to a tee, Pussy Riot member Nadya Tolokonnikova called for anti-Trump Americans to turn their anger into art, particularly music and visual art. The use of political graffiti is a popular Sharp tactic. The street protests and anti-Trump music and art were the first phase of Soros’s Purple Revolution in America.

President-elect Trump is facing a two-pronged attack by his opponents.

These neo-Cold Warriors are trying to convince Trump that he must maintain the Obama aggressiveness and militancy toward Russia, China, Iran, Venezuela, Cuba, and other countries.

The second front arrayed against Trump is from Soros-funded political groups and media. This second line of attack is a propaganda war, utilizing hundreds of anti-Trump newspapers, web sites, and broadcasters, that will seek to undermine public confidence in the Trump administration from its outset.

One of Trump’s political advertisements, released just prior to Election Day, stated that George Soros, Federal Reserve chair Janet Yellen, and Goldman Sachs chief executive officer Lloyd Blankfein, are all part of «a global power structure that is responsible for the economic decisions that have robbed our working class, stripped our country of its wealth and put that money into the pockets of a handful of large corporations and political entities».

Soros and his minions immediately and ridiculously attacked the ad as «anti-Semitic». President Trump should be on guard against those who his campaign called out in the ad and their colleagues. Soros’s son, Alexander Soros, called on Trump’s daughter, Ivanka, and her husband Jared Kushner, to publicly disavow Trump. Soros’s tactics not only seek to split apart nations but also families.

Trump must be on guard against the current and future machinations of George Soros, including his Purple Revolution.