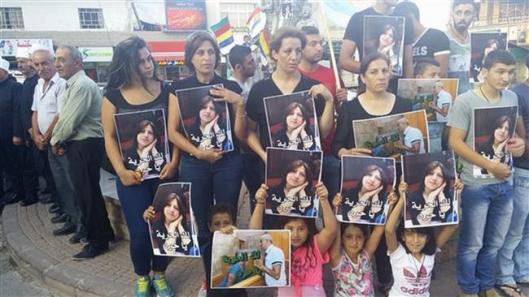 (Press TV,) ~ An Israeli court has handed down prison sentences to two Syrians living in the occupied Golan Heights for blocking an Israeli ambulance transporting militants operating in Syria for treatment.

The military court on Thursday sentenced Amal Abu Saleh to seven years and eight months in jail and a fine of more than 3,000 dollars, Syria’s official news agency SANA reported.

Bashira Mahmoud, the other Syrian, was sentenced to 22 months in prison. She was also fined 1,000 dollars.

According to the report, Israeli forces arrested the two along with 24 others in June 2015, when residents of the village of Majdal Shams blocked the ambulance and prevented it from transporting two injured terrorists with the Takfiri Jabhat Fateh al-Sham militant group, formerly known as al-Nusra Front.

The Israeli regime later released the detainees except the two. Bashira has been under house arrest since July 2016.

Sheikh Nazih Abu Saleh, Amal’s uncle, said the court ruling was “hostile.” He added that the residents of the occupied Golan Heights have the right to block the transport of al-Nusra terrorists for treatment in Israeli hospitals.

Ahmed Sheikh Abdul Qader, the governor of the city of Quneitra in southwestern Syria that borders Golan, slammed the “provocative” court ruling, calling on human rights organizations to force the Israeli regime to release Syrians held in its prisons.

Syria says Israel and its Western and regional allies are aiding Takfiri terrorist groups operating inside the Arab country.

In December 2015, the Daily Mail said the Israeli regime had saved the lives of over 2,000 Takfiri militants at the cost of about 13 million dollars since 2013.

The Syrian army has several times seized huge quantities of Israeli-made weapons and advanced military equipment from the foreign-backed militants inside Syria.

In February 2014, photos of Israeli Prime Minister Benjamin Netanyahu were released, showing him visiting injured militants at a field hospital in Israel.