(Palmyra 11 November 2016, Report by R. Milhem / Ghossoun) ~ Syrian Arab Army units and the Armed Forces working in Homs aided by the Russian Air Force foiled a fierce attack of Daesh (ISIS, ISIL, IS…) terrorists on Palmyra city and the military checkpoints surrounding it in eastern Homs Province over the past night, killing or injuring hundreds of the terrorists.

Syrian National Agency reporters in Homs said that army units and the popular defense groups engaged in fierce clashes using different sorts of weapons with large groups of Daesh terrorists that attacked the military points spread in Palmyra area from the northern, eastern and southern sides.

The reporter said that the clashes ended with thwarting the attack from all the aforesaid axes and killing or injuring hundreds of the terrorists and destroying scores of their vehicles.

He mentioned that the military sorties concentrated on Daesh supplying lines deep in the Badyia (desert) area, destroying three Daesh terrorists’ convoys of vehicles in al-Tyba, al-Sukhna and al-Lattoum areas to the east of Palmyra city.

A military source said that army units also repelled Daesh terrorists’ attack in the vicinity of al-Tar Mountain and al-Amiriyah town northeast Palmyra, killing scores of them and destroying 5 of their vehicles .

In the same context, Russian Defense Ministry said in a statement issued on Sunday and published by RT Website “Over the past night, with active Russian air support, Syrian government forces repulsed all attacks by the terrorists on Palmyra.”

“The militants actively used cars filled with explosives, armored vehicles, and rocket artillery. Russian aircraft carried out 64 airstrikes on militant gatherings, positions, columns, and reserves as they advanced,” it added.

The Ministry pointed out that “11 tanks and infantry fighting vehicles, and 31 cars equipped with heavy machine guns have been destroyed.”

(11/12/2016) ~ Army units, in cooperation with the supporting forces and allies, on Sunday continued advance in the eastern neighborhoods of Aleppo and restored security and stability to the neighborhood of al-Assila to the southeast of Aleppo Citadel and the southeastern part of Karm al-Da’da’ neighborhood, a military source said.

The source added that the army units continue chasing the remnants of the terrorists in the region and dismantling mines and improvised explosive devices planted by terrorist  organizations in the streets and squares.

In Lattakia, the source said that an army unit destroyed an armored vehicle of the terrorist organizations on the axis of al-Tefahieh in the northern countryside of Lattakia. 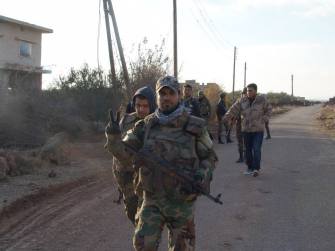 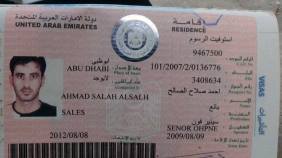 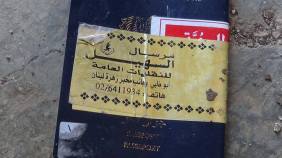 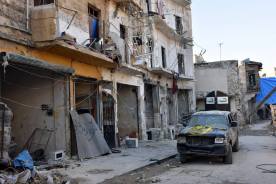 (10/12/2016) ~ Governor of Damascus Countryside Alaa Ibrahim visited Saturday al-Tall city to inspect services there after the city has been evacuated of arms and gunmen and got back to normal life.

In a speech he delivered at the Panorama Square addressing the locals of the city, Ibrahim stressed that all of the countryside of Damascus will soon be secured after terrorists are expelled.

He assured the residents that electricity, water and sewerage services will soon be restored in the city, and that the bodies concerned will work “hand in hand” with the locals to reconstruct what was destroyed by the terrorist organizations.

Commander of the Damascus Countryside Police Maj. Gen. Jamal Bitar said the Internal Security Forces will resume performing their national duty in the city to restore order to it and protect public and private properties.

On December 2, a reconciliation agreement was implemented in al-Tall city where a number of militants had their legal status settled according to the Amnesty Decree no. 15 for 2016.

Other militants who wanted to leave the city were allowed to do so after they handed over their arms to the authorities. 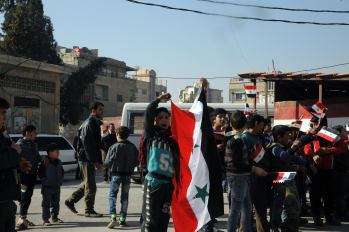 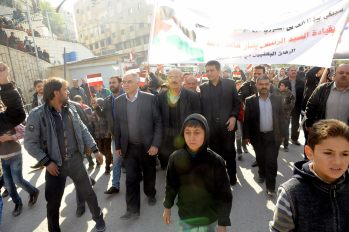 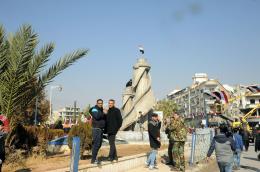 (10 December 2016, by H. Said) ~ The Russian Defense Ministry stressed on Saturday that military operations against the terrorist organizations in the eastern neighborhoods of Aleppo city have been suspended to allow the evacuation of civilians who are held by the terrorists as human shields.

The Ministry spokesperson Major General Igor Konashenkov confirmed that “More than 20,000 residents left eastern Aleppo in the first part of Saturday, and 1,217 militants laid down their weapons.”

The Hmemim-based Russian Reconciliation Center is monitoring the evacuation of civilians from the blocked districts round-the-clock with the use of drones.

Earlier today, SANA reporter in Aleppo said new groups of civilians who are besieged by the terrorist organizations have left the neighborhoods of al-Sukkari, al-Fridous and Salah-Eddin.

Those have been relocated in well-equipped makeshift centers in Jebrin area with the help of the army and the authorities concerned.

Meanwhile, a statement issued by the Russian Reconciliation Center said the Russian mine disposal experts continue their work alongside the engineering members within the Syrian army to clear liberated areas in the eastern neighborhoods of Aleppo.

It noted that mines have been removed in an area of 8 hectares, while explosive devices have also been removed from 24 buildings, bakery, two schools, two mosques, power stations and 4.5 km of roads. 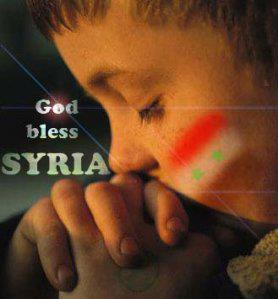