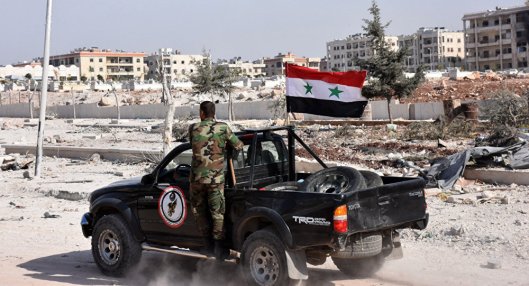 Aleppo is to be declared a completely liberated city by Damascus any moment now as Jeish Al-Fatah terrorists are now left with only four city districts in the South-East after the Syrian army troops and popular forces captured two more neighborhoods.

Mercenary-terrorist gangs retreated from more districts in Aleppo city as the Syrian Arab Army and its allies are in the final stages of recapturing the city after months of battle with thousands of terrorists.

The Syrian soldiers and Hezollah forces managed to drive members of the Jeish Al-Fatah coalition of terrorist groups out of Bustan al-Qasr (Bustan al-Kaser) and al-Kelaseh districts in Aleppo city, squeezing the militants in a very small area with two choices: surrunder or die.

Jeish Al-Fatah, a conglomerate of terrorist groups under the command of the Al-Nusra Front sustained numerous casualties in Aleppo on Monday. The backbone of the umbrella group is made of Al-Nusra units, while militants from 12 other terrorist groups, including Ahrar Al-Sham, are all members of Jeish al-Fatah.

According to a Syrian military source, pro-government forces are in “the final moments before declaring ultimate victory” in Aleppo, as the neighborhoods of al-Ansari, al-Mashhad, al-Zabdiyeh and al-Sukri are the only regions still under terrorists’ control.

Local sources in the city also reported that Syrian people have poured to the streets in the Southern neighborhoods, celebrating the imminent victory of the country’s soldiers and popular forces in Aleppo battle.

The Syrian army units started special operations in Aleppo after several humanitarian pauses declared by Damascus and Moscow to give a chance to the civilian population as well as the militants to leave the Eastern parts of the city through 8 corridors.

District after district have fallen into the hands of the Syrian army soldiers and their allies in the city of Aleppo, as the pro-government troops have recaptured most of the blocks and districts in the Northern and Southern parts of Eastern Aleppo.

Also, tens of thousands of civilians, including hundreds of children and newborn babies, have also left the Eastern part of the besieged Syrian city of Aleppo in recent days, while thousands of militants laid down their arms and left Eastern Aleppo through the special corridor.

Over the recent months, Aleppo has been a battlefield between government forces and numerous terrorist groups.