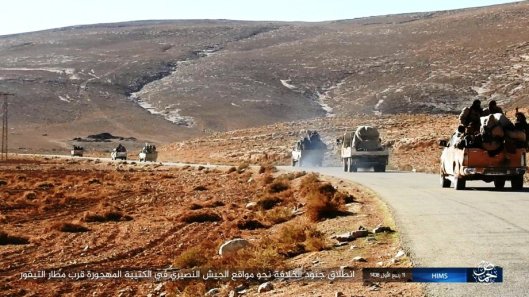 The operation to retake the Iraqi city of Mosul from the Daesh terror group appears to have enabled thousands of Islamist fighters to flood toward central Syria, Russian analyst Sergei Demidenko told RIA Novosti.

(Sputnik) ~ On Sunday Russia’s Center for Syrian reconciliation reported that the Daesh terror group was making plans to transfer up to 5,000 fighters from Mosul to the regions of Deir ez-Zor and Raqqa in Syria.

The Iraqi army-led operation to liberate Mosul was launched in October. Iraqi armed forces are working in collaboration with Kurdish Peshmerga fighters, Shiite Popular Mobilization forces and federal police, and have the military backing of the US-led coalition.

In early October a military source told RIA Novosti that the US had agreed with Saudi Arabia to provide Daesh militants a safe passage from Mosul, if they were prepared to flee the city without a fight.

The source said that Washington and Riyadh’s plan envisages enabling the terrorists to attack towns in central and eastern Syria under the control of government forces.

“Over 9,000 Daesh militants will be transferred from Mosul to the Eastern regions of Syria for a subsequent major offensive, which intends to capture Deir ez-Zor and Palmyra,” the source told the agency at the time.

The allegation seems particularly prescient in the wake of the recent terrorist assault on Palmyra, as a result of which Daesh militants recaptured important strategic areas of the ancient city on Monday.

Palmyra had been liberated in March this year after being captured by Daesh in May 2015.

The Center for Syrian Reconciliation said that more than 4,000 Daesh militants had regrouped for the assault to retake Palmyra, as the terrorists made a concerted effort to engineer a propaganda victory and morale boost after recent defeats to Syrian government forces, backed by Russia.

[Note by SyrianFreePress-WarPressInfo: Three days ago, U.S. aircraft had destroyed the radio infrastructure and SyriaTelecom antennas between Raqqa and Tadmur, to block communications of Syrian forces]

Sergei Demidenko, lecturer at the Institute of Social Sciences of the Russian Presidential Academy of National Economy and Public Administration (RANERA), told RIA Novosti that Washington and Riyadh wanted to rid Mosul of the militants, but their final destination was a secondary consideration.

“Certainly it’s possible (that militants were allowed to leave Mosul), but not in the sense that they wanted to inflict damage on Bashar Assad or Russia. Of course, there is a place for such considerations but they are not the key issue,” lecturer at the Institute of Social Sciences of the Russian Presidential Academy of National Economy and Public Administration (RANERA) Sergei Demidenko told RIA Novosti.

Demidenko said that the Iraqi-led coalition and its backers have naturally sought the easiest route to victory in Mosul, will little afterthought for the subsequent destination of terrorists who leave the city.

“This is not a surprise. If we consider this from a purely strategic point of view then first of all the coalition and Iraqi troops need to capture the city by any means. They don’t need to set up a trap for the terrorists there and kill them. It’s easier for them to push them out and declare success. It’s a purely strategic calculation.”

Demidenko said that Washington’s need for a propaganda boost with the Mosul operation, as the Syrian army records success in ridding its territory of Islamist terrorists with Russian support, also led it to favor this approach.

“This battle is part of the information war, to be able to say that they have achieved something in the fight against Daesh. This is above all necessary for the Obama administration, to be able to announce some kind of success in this field,” the analyst said.