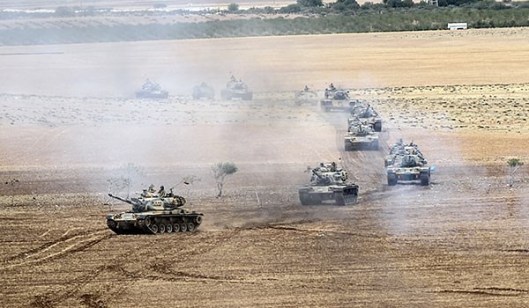 (FNA, 29/12/2016) ~ The Turkish government has recruited Syrian male refugees between the ages of 18 and 35 to fight beside its mercenaries within the framework of the Euphrates Shield Operation in Northern Syria.

The Arabic-language al-Hadath news website said in a Thursday report that while sources close to the terrorist groups deny such reports, media activists close to the dissidents have confirmed the revelations and released images showing white buses in Gaziantep are used for transferring the refugees back the battlefields in Northern Syria.

“The Turkish authorities force any Syrian refugee of eligible age to get on the white buses to be taken back to Northern Syria to fight in Ankara’s Euphrates Shield Operations,” the report added.

Meantime, media sources revealed on Saturday that the Turkish Army has suffered heavy death toll in its so-called anti-ISIL operation in Northern Syria and is growingly entangled in waves of problems with no way out.

The Russian language Kommersant daily reported that based on recent information, the Turkish forces have suffered heavy casualties in their operation in Northern Syria codenamed the Euphrates Shield that they started over four months ago.

The paper added that 16 Turkish soldiers have been killed and 33 more have been wounded in only one day, proving that the Turkish operation that once seemed to be successful is now no more than a big problem for the Turkish Command.

The Turkish soldiers and Ankara-backed militant groups face firm resistance of ISIL in the town of al-Bab in Northern Aleppo. ISIL used it suicide combatants, which surprised the Turkish army and its militant allies and inflicted major losses on them. The Turkish army’s casualties have been unprecedentedly high since the start of Euphrates Shield Operation on August 24.

From the archives:
Turkey Forces Syrian Refugees
to Fight in Euphrates Shield Operation

(FNA, 22/11/2016) ~ Turkey has detained a large number of young Syrian male refugees without any explanation and plans to send them to Syria to fight for Ankara in its Euphrates Shield Operation, local sources disclosed on Tuesday.

“The Turkish security forces attacked Zohrat al-Forat hotel in Urfa city (in Southeastern Turkey) close to the border with Syria and kidnapped 20 young men after arresting 50 others who live in the city camps,” the sources said.

They added that the Turkish police officers also attacked many houses which shelter the Syrians in the Central part of Urfa and near the municipality building and abducted tens of other young Syrian refugees.

The sources said the Turkish army has stated no charge or accusation for these arrests.

According to the sources, Turkey plans to send the young Syrian men to help the country’s forces in the Euphrates Shield operation in Northern Syria.

Turkey declared in August that its Army had started the ‘Euphrates Shield’ military operation in Syria, allegedly to cleanse the ISIL terrorists from its border with Syria.

But, despite Ankara’s allegation, the Turkish military forces support militant groups in Northern Syria, and fight against Kurdish forces in the region.

Turkish officials have frequently stressed that ‘Euphrates Shield’ will continue to create a safe zone in Northern Syria.

Damascus has condemned Ankara’s military operation and entry of Turkish special forces and tanks into Syria, while Moscow expressed deep concern about what is happening in the Syrian-Turkish border.