[T]he Administration has cooperated with Saudi Arabia’s government, which is Sunni, in clandestine operations that are intended to weaken Hezbollah, the Shiite organization that is backed by Iran. The U.S. has also taken part in clandestine operations aimed at Iran and its ally Syria. A by-product of these activities has been the bolstering of Sunni extremist groups that espouse a militant vision of Islam and are hostile to America and sympathetic to Al Qaeda.

Mr Biden said that “our biggest problem is our allies” who are engaged in a proxy Sunni-Shiite war against Syrian President Bashar Assad. He specifically named Turkey, Saudi Arabia and the UAE.

“What did they do? They poured hundreds of millions of dollars and thousands of tons of weapons into anyone who would fight against Assad – except that the people who were being supplied were (Jabhat) Al-Nusra and al-Qaeda and the extremist elements of jihadis coming from other parts of the world,” Mr Biden said.

… we need to use our diplomatic and more traditional intelligence assets to bring pressure on the governments of Qatar and Saudi Arabia, which are providing clandestine financial and logistic support to ISIL and other radical Sunni groups in the region.

ISIS, Iraq, and the Lessons of Blowback:

Qatar’s military and economic largesse has made its way to Jabhat al-Nusra, to the point that a senior Qatari official told me he can identify al-Nusra commanders by the blocks they control in various Syrian cities. But ISIS is another matter. As one senior Qatari official stated, “ISIS has been a Saudi project.” 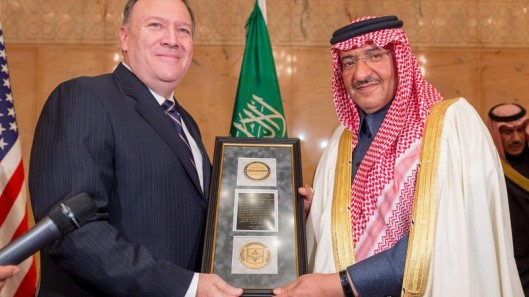 The Saudi Crown Prince Mohammed bin Nayef bin Abdulaziz al-Saud, Deputy Prime Minister and Minister of Interior, received a medal on Friday from the CIA for his distinct intelligence-related counter-terrorism work and his contributions to ensure international peace and security.

The medal, named after George Tenet, was handed to him by CIA Director Micheal Pompeo after the Crown Prince received him in Riyadh on Friday in the presence of Deputy Crown Prince Mohammad bin Salman al-Saud, Deputy Prime Minister and Minister of Defense.