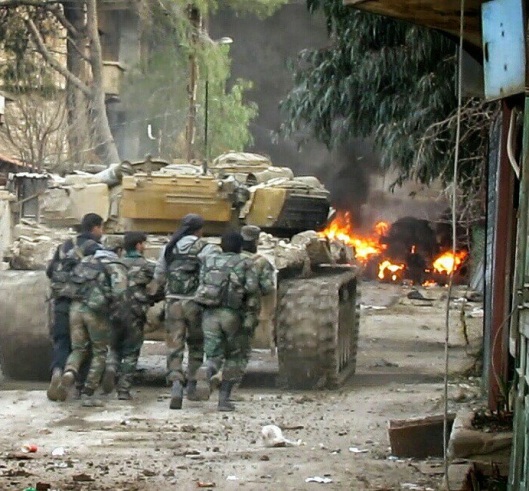 Syrian Arab Army foils terrorist attack on the outskirts of Jobar, restores all points into which Jabhat al- Nusra terrorists were infiltrated, eliminate dozens of them

(Damascus, SANA 20/3/2017) ~ A military source declared that all points into which Jabhat al-Nusra terrorists and the affiliated groups infiltrated in the surroundings of the factories area to the north of Jobar on the eastern outskirts of Damascus City were restored.

The source said that over the past few hours, army units carried out a number of military operations, restoring all the points into which Jabhat al-Nusra and the affiliated groups infiltrated in the surroundings of the factories area to the north of Jober and restored the normal situation to the area.

The source added that the military operation focused on the areas from which Jabhat al-Nusra terrorists and the affiliated groups started their attack and the operation was precise and decisive as it was carried out in a record time and with a high coordination between all participating units.

All members of the terrorist groups which infiltrated to the area were eliminated and their equipment was destroyed, according to the source.

The source added that a large number of terrorists were also killed in the operation including some of their leaders and a number of foreign terrorists, in addition to destroying a number of their command centers, depots of arms and ammunition, booby-trapped vehicles and machinegun-equipped vehicles.

SANA reporter said that over the past few hours, the army air force carried out intensive airstrikes against positions and dens of Jabhat al-Nusra terrorists in Taybet al-Imam, Kafr Zita, al-Latamineh, al-Lahayia and al-Zwar, destroying a number of their vehicles and killing and injuring a number of them.

The reporter added that the army artillery shelled positions of the terrorist organizations in the surroundings of Mourek and Taybet al-Imam, inflicting heavy losses upon them in the arms and personnel.

The army air force also carried out a number of airstrikes against a convoy of vehicles belonging to Jabhat al-Nusra terrorists in the surroundings of the village of al-Madiq Castle, 50 km to the northwest of Hama City, destroying a number of vehicles and killing at least 5 terrorists.

An army unit killed all members of a terrorist group affiliated to ISIS terrorist organization after they infiltrated to one of the military posts on the eastern barricade of Deir Ezzor Airport.

SAA fends off attack in east Damascus with counter-offensive

Syrian Army continues push against IS forces near Palmyra

1 thought on “SAA fends off attack by mercenary-terrorists in east Damascus with counter-offensive, while its operations against Daesh’s apes near Palmyra and Deir Ezzor successfully continues […despite the recent Zionist intervention in aid of the terrorist gangs…] ~ REPORTS”