That is to say: this is the proof that groups of mercenaries-terrorists are in possess and are using chemical weapons, not the Syrian Army and the Syrian government

(Damascus, 13 April 2017) ~ The  General Command of the Army and Armed Forces said that the aircrafts of the so-called “US-led International Alliance” on Wednesday between the hour 17:30 and 17:50 carried out an airstrike against a position of ISIS (Daesh, ISIL, IS) terrorists that includes a large number of foreign mercenaries in the village of Hatla to the east of Deir Ezzor, causing a white cloud that became yellow as a result of the explosion of a huge store that includes a large amount of toxic materials.

In a statement issued Thursday, the Army General Command  stressed that the airstrike of the “US-led International Alliance” killed hundreds, including large numbers of civilians, due to the suffocation resulted from inhaling toxic substances. 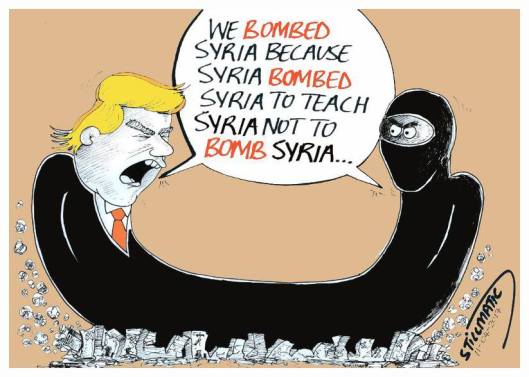 (PressTV) ~ Reports coming out of Syria suggest that hundreds of people, including civilians, have lost their lives after an airstrike by the US-led coalition hit poison gas supplies belonging to Daesh terrorists.

The General Command of the Syrian Army and Armed Forces, in a statement released on Thursday, announced that the airstrike had taken place in the eastern village of Hatla, near the city of Dayr al-Zawr, at around 5:30 p.m. local time (1530 GMT) the previous day.

The statement, published by Syria’s official news agency, SANA, added that a cloud of thick white smoke covered the area after the strike, before it turned yellow. The assault also caused a fierce blaze, which continued until late in the evening on Wednesday.

According to the Syrian Army statement, hundreds of people, including a large number of local villagers, were killed after inhaling high volumes of toxic fumes spread in the targeted area.

The statement further noted that the attack was evidence to the close coordination that exists between terrorist groups operating inside Syria and their sponsors to level accusations of chemical weapons use against the Syrian government forces, and also proved that the militants were in possession of chemical warfare.

The Syrian Army statement went on to say that terror outfits, particularly Daesh and al-Nusra Front, were able to acquire and transport chemical weapons through the assistance of certain regional powers, emphasizing that the Damascus government had repeatedly warned that terrorist groups would use chemical weapons against civilians and Syrian army forces.

It also highlighted that the Syrian army neither possessed chemical munitions, nor would ever use them, arguing that terrorist groups continued to use chemical weapons against Syrian civilians with impunity.

The development came less than a week after a suspected chemical attack in the town of Khan Shaykhun in Syria’s Homs Province reportedly left over 80 people dead on April 4.

Following the attack, the US Defense Department, Pentagon, said 59 Tomahawk cruise missiles had been fired from two US warships in the Mediterranean Sea at the Shayrat airfield in the same Syrian province on April 7. US officials claimed that the suspected Khan Shaykhun attack had been launched from the military site.

SANA reported that at least nine people had been killed in the early morning strike on the Syrian airfield.

Syria’s Foreign Ministry condemned the US strike as “a flagrant aggression” against the Arab country, saying that Washington’s real objective was to “weaken the strength of the Syrian army in confronting terrorist groups.”

The ministry described the Khan Shaykhun attack as a “premeditated action that aimed to justify the launching of a US attack on the Syrian army.”

The Russian Foreign Ministry also censured the attack as an act of aggression against a sovereign state.