Terrorists detonated a car bomb they had managed to sneak into the area by loading it with children’s food supplies. 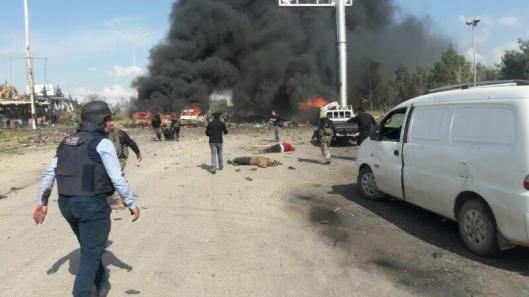 Aleppo, 15/4/2017 ~ Around 40 people were killed and scores more were injured in terrorist car bomb attack that took place in al-Rashideen area west of Aleppo near the buses which are transporting locals from the towns of Kefraya and al-Foua’a.

SANA’s correspondent in Aleppo said that terrorists detonated a car bomb in the area where buses and ambulances have been parked for more than 24 hours in al-Rashideen area to transport 5,000 citizens of Kefraya and al-Foua’a towns.

He added that the terrorist bombing claimed a number of lives and caused injuries to scores of civilians, most of them women and children, in addition to causing considerable damage to the buses and the ambulances.

The correspondent said that the terrorists managed to sneak the car bomb into the area by loading it with children’s food supplies.

A source at the Syrian Arab Red Crescent (SARC) told SANA that the staff supervising the process of evacuating locals from Kefraya and al-Foua’a are present at the site of the attack and carrying out their duties according to available resources, adding that the SARC ambulances are all accounted for as a few of them sustained some damage, while 3 SARC members sustained wounds of moderate severity due to the attack.

Footage filmed at the Aleppo University Hospital on Saturday shows children and women lying on stretchers and being treated, after a suicide attack in Aleppo’s southwestern Rashidin district struck a convoy of evacuees. The victims were from two majority-Shia villages under siege by opposition forces, and were being transferred to government-controlled areas in Aleppo when the attack took place. Around 40 people were killed in the attack.

Aleppo, SANA – The first batch of buses transporting people from the towns of Kefraya and al-Foua’a arrived in Aleppo city on Saturday evening, as per the agreement for evacuating them from their terrorists-besieged towns in parallel with evacuating militants and some of their families from al-Zabadani and Madaya.

SANA’s correspondent in Aleppo said that 15 buses transporting hundreds of people from Kefraya and al-Foua’a arrived in al-Ramousa area and then headed to Jebrin area where Aleppo Governatorate has set up a temporary housing center equipped with all essential food and medical supplies. 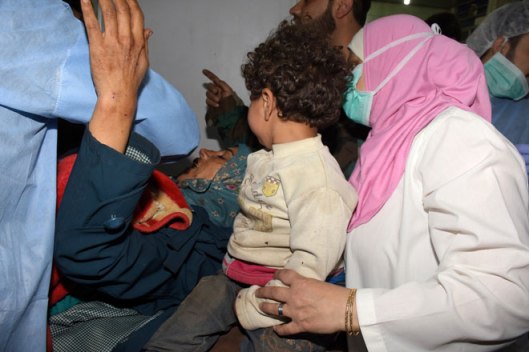 The correspondent said that prior to this ambulances belonging to the Syrian Arab Red Crescent (SARC) arrived transporting more than 50 people who were injured by the terrorist bombing that had targeted al-Rashidin area west of Aleppo where the buses were gathered.

75 buses and 20 ambulances transporting 5,000 people from Kefraya and al-Foua’a were scheduled to arrive to Aleppo on Friday at noon, but disputes among terrorist groups that stalled in implementing the agreement prevented that, with the buses remaining trapped in al-Rashidin area for over 30 hours. 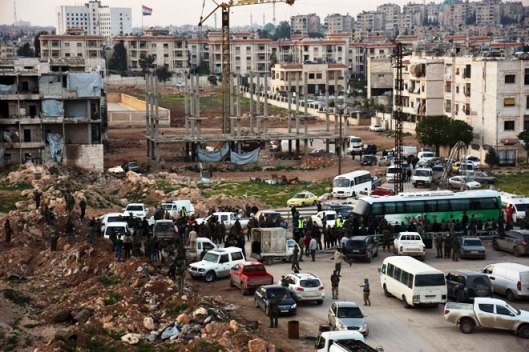 SANA’s correspondent said that in parallel with the arrival of the first batch of buses, buses transporting more than 2,300 militants and their family members arrived to al-Rashidin coming from al-Zabadani and Madaya, and the exchange of buses between al-Ramousa and al-Rashidin will continue gradually and simultaneously until the process is completed under the supervision of the SARC.