A desperate attempt by the Zionist entity to raise the collapsed morale of its mercenary-terrorists, Tel Aviv’s allied puppets. Also a strategic agreement with the U.S. to attack Syria from south and from north. 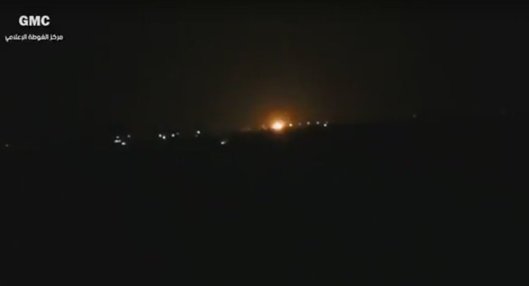 Damascus, 27/4/2017 ~ A Syrian military position southwest of Damascus International Airport was exposed to an Israeli aggression with several missiles fired from inside the occupied territories at dawn on Thursday causing explosions in the place and leaving some material losses, a Syrian Arab Army source said.

The source added that the Israeli aggression comes as a desperate attempt to raise the collapsed morale of terrorist groups due to the Syrian army’s blows and this aggression will not dissuade the army from continuing the war against terrorism and crushing it.

“One of the military facilities located to the southwest of Damascus International Airport was subjected to missile fire from hostile Israel,” the SANA news service cited the source as saying.

Lebanese media reported a large blast in the vicinity of the airport early Thursday, speculating that the explosion at the fuel depot could have been carried out by Israel.

“The missiles were fired from the occupied territory, which led to explosions on the ground and property damage,” the Syrian military source specified.

Israeli officials have not commented on the issue yet. However, Intelligence Minister Yisrael Katz, speaking to Army Radio from the United States earlier, hinted at what had happened in Damascus.

“The incident in Syria corresponds completely with Israel’s policy to act to prevent Iran’s smuggling of advanced weapons via Syria to Hezbollah,” he said, without explicitly confirming Israel’s involvement.

Hostilities between Israeli and Syrian regularly escalate, with IDF planes hitting targets in Syria in response to cross-border fire incidents while also attacking groups it deems hostile inside the country, while Syrian forces have several times claimed to have shot down IDF aircraft violating the country’s airspace.

(click on map to enlarge ~ here for the original link)