QUNAYTRA:  There is no better proof that the Zionist Settler State is awash in war crimes and violations of international law than its support for Alqaeda, in the former disguise of Jabhat Al-Nusra, n/k/a Hay`at Tahreer Al-Shaam.  Yesterday, in what appeared to be another fouled-up Zionist military operation against SAA positions near Al-Ba’ath City, the Syrian Army repelled a frontal attack by Alqaeda vultures just as Zionist helicopters fired missiles at civilian residencies killing over 25 with many in critical condition.  The stinking rat Khazar Zionist cockroaches couldn’t hit the wall of a barn if they had to.  As they fired at Syrian Army tanks, they were shocked, evidently, to see how effective new Russian armor was and how effective the Sarab 1 anti-rocket system was in deflecting American-made TOW rockets.  The attack was a disaster.  Over 17 Alqaeda rodents were killed with scores seen evacuated to noisome clinics operated by Warsaw Ghetto scum near Al-Hameediyya.

SAA in action
in rural Kuneitra and eastern Gouta

HAMA: The president of the republic, joined with other Muslims to celebrate the end of the Holy Month of Ramadan at the Al-Noori Mosque in the City of Hama.  He was flanked by the Grand Mufti, Ahmad Badreddeen Hassoon, and the Minister of the Islamic Charities (Awqaaf).  Western propaganda machines are having some kind of field day with this event because as they,wrongly, claim, the president rarely leaves Damascus.  Their suggestion is that he remains cloistered in his home as the war supposedly rages on.  One article in the MSM argued the president, Dr. Assad, is showing a new confidence in the way the war is evolving, hence, his unexpected visit to Hama.

Al-Salamiyya:  At the axis of the oil pipeline and the ruins of Al-Deeba, the Russian navy fired off 6 Kaliber cruise missiles from 2 frigates and a submarine in the Mediterranean while the Syrian Army joined in by unloading tons of ordnance on the remaining ISIS refuse infecting the Hamawi countryside.  According to all sources on the ground, ISIS suffered heavy losses in rats and materiel.

DER’AH: The Syrian Army has successfully sealed off the Eastern side of Der’ah from the partially-infested Western side. In doing this, the SAA has essentially isolated pockets of Saudi-and-Zio-supported terrorists and prevented them from infiltrating into the east to conduct trade or to replenish their supplies.  This is the end of the terrorist occupation of Der’ah. A large SAA force from the 5th Mechanized Armored Division is preparing to launch the final offensive to exterminate the cringing rodents.

DAYR EL-ZOR:  Short and sweet: The SAA has finally crossed the Euphrates River and entered the Eastern side of DZ.  ISIS defenses are collapsing as news from Mosul continues to arrive indicating a major military catastrophe there along with leaked news of the “Caliph’s” demise.

Robert Ford:
“Kurds will pay the price for trusting the Americans” 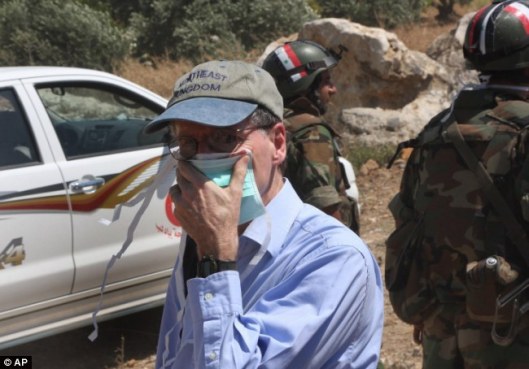