(SANA) ~ Russia has slammed as “unacceptable” the U.S. threats against the legitimate leadership in Syria following a recent White House statement alleging that this leadership is planning a chemical attack. 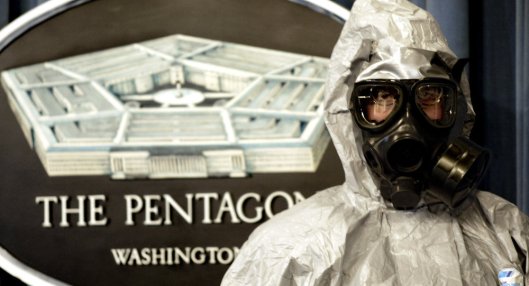 “We heard about this statement. We don’t know what it’s based on. And, of course, we strongly disagree with the wording ‘another attack,” the Kremlin spokesman Dmitry Peskov told Novosti agency on Tuesday.

“We also consider any similar threats to the legitimate leadership of the Syrian Arab Republic unacceptable,” Peskov stressed.

“The Syrian government cannot be held accountable for the April 4 chemical attack in Idleb province “because, as you know, despite all Russia’s demands, an unbiased international investigation of the previous tragedy has not been carried out,” he added.

”Because, as you know, despite all the demands of the Russian side, there was no independent international investigation of the previous tragedy with the use of chemical weapons. We do not believe it is possible to rest the responsibility on the Syrian armed forces,” Peskov said.

However, he noted that a potential danger of repeated provocations with chemical weapons use in Syria still exists as there is evidence that ISIS terrorists possess such arms.

“Cases of chemical toxic substances’ use by ISIS terrorists have been repeatedly recorded. There is a potential threat of the repeat of such provocations. However, I repeat that I don’t possess exact information and I believe that my colleagues from special services and the Defense Ministry will share it [information] if they possess it.”

Earlier, White House Press Secretary Sean Spicer issued a statement claiming the US “has identified potential preparations for another chemical weapons attack that would likely result in the mass murder of civilians.”

Lavrov accuses US of protecting Nusra Front terrorists in Syria

Lavrov said the US appears to have been protecting foreign-backed militants such as Nusra Front from aerial bombardment. During a press conference with his Ethiopian counterpart in Moscow, Lavrov stressed that the coalition’s move violates all international law. The top Russian diplomat also underlined the need to eliminate double standards regarding the fight against terrorism. Washington has recently come under severe criticism after American warplanes shot down a Syrian government jet near the Syrian city of Tabqa and a drone in the country’s south. Moscow has said the attacks were yet another sign that the United States is complicit in the acts of terror groups in Syria.