UPDATE: Some person from Strike Fighter Squadron 31 realised that this video had been a big mistake and deleted the video. However, SF has a downloaded version: 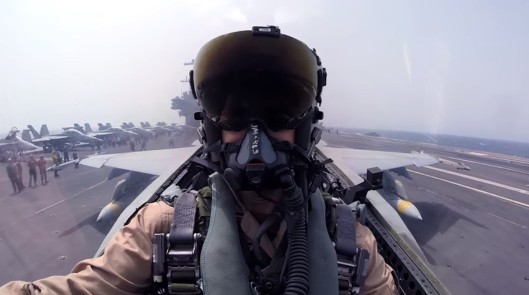 Strike Fighter Squadron 31 [also known as VFA-31 or the Tomcatters] of the US Navy has released an unofficial video promoting ‘successful’ actions of the military force against the Syrian government in Syria as well as ISIS in Syria and Iraq.

The video provides a look at a missile strike at the Syrian military airfield in Al-Shayrat (2:35), strikes against Syrian government forces near Al-Tanf at the Syrian-Iraqi border (5:49), a downing of the Syrian Arab Air Force’s Su-22 south of Tabqah (6:12) and an Iranian unmanned aerial combat vehicle near At-Tanf (6:27) as well as mutliple cases when Strike Fighter Squadron 31 air craft were “flying near” warplanes of the Russian Aerospace Forces operating against terrorists in Syria.

The Strike Fighter Squadron 31 is attached USS George H.W. Bush carrier strike group. In August 2017, it returned from a seven month combat deployment in support of Operation Inherent Resolve (OIR) – the US military operational name for its intervention in Syria and Iraq.

No doubts this video will boost morale of US military personnel.

However, this does not change the fact that the US-led coalition has no legal basis to operate in Syria and to continue its attempts to overthrow the country’s internationally recognized government.