The army soldier started carrying out mop-up operation in the regions and fortified their positions.

Relevant reports said earlier this month that the army men deployed North of al-Zali’eiyat region between the provinces of Homs and Deir Ezzur attacked ISIL’s positions in the depth of Badiyeh and arrived in the al-Sarayem region after advancing 17km against terrorists.

ISIL suffered heavy casualties and their military hardware sustained major damage in the clashes, according to the army.

The wide-scale military operation against ISIS and other terrorist organizations’ hideouts and gatherings is continued across the Syrian provinces.

In Deir Ezzor, according to a military source, the Syrian Air Force on Sunday carried out intensive airstrikes against positions of ISIS terrorists  in the villages of al-Boulil and al-Muhassan city in the eastern countryside.

The source said that scores of terrorists were killed in the airstrikes and one of their armored vehicles was destroyed, in addition to destroying a number of their machinegun-equipped cars and varied types of machineguns, positions, fortifications and mortar launchers.

SANA reporter said that army units engaged in heavy clashes with ISIS terrorists on the axes of Khsham/Hatla Fouqani and al-Bo Omar in the northeastern and eastern countryside of Deir Ezzor.

As a result of the clashes, a number of ISIS terrorists were killed or injured, in addition to the destruction of their weapons.

The reporter pointed out that the army’s air force and artillery directed strikes on ISIS sites and movements in the villages of Khsham, al-Jneina, al-Husseiniya and Huweijet Saqr and the neighborhoods of al-Huweiqa, al-Jbeila, al-Sheikh Yassin and Kanamat, destroying command centers, fortifications, sites and 3 vehicles equipped with heavy machineguns.

In Hama, a series of sorties also targeted positions and fortifications of ISIS terrorists in the besieged pocket in the eastern countryside of al-Salamiyeh city in Hama Province.

The military source said that the strikes targeted gatherings and supply lines of ISIS in the villages of Akash, Abu Hanaya, Rasem al-Abed and to the southeast of al-Uqairbat town in the eastern countryside of al-Salamiyeh.

The source said that the strikes hit the targets accurately, inflicting heavy losses upon the terrorists in personnel and weaponry where several armored vehicles, cars equipped with machineguns and mortar launchers were destroyed.

The Air Force also intensified its strikes on ISIS terrorists’ sites and the their supply routes  to the east of al-Sokhneh city in the countryside of Homs.

The military source said that the strikes resulted in killing and wounding  a number of terrorists and destroying their weapons, some of them armored and others equipped with heavy machine guns, in addition to destroying artillery and mortars launching pads.

Identical civil and media source said that the warplanes of the international coalition led by the US shelled with white phosphorus-loaded bombs the outskirts of al-Sour town in the northeastern countryside of Deir Ezzor province, and that 3 civilians were killed in the aggression and 5 others were injured, in addition to causing huge material damage to the public and private properties.

Twelve civilians were killed as the US-led coalition bombarded once again citizens’ houses in the countryside of Deir Ezzor.

The village of Buqrus Fouqani in the eastern countryside of Deir Ezzor also came under attack by the coalition’s warplanes.

Ten more civilians were reported injured, according to the sources, who noted that a number of houses were destroyed in the coalition’s bombardment. 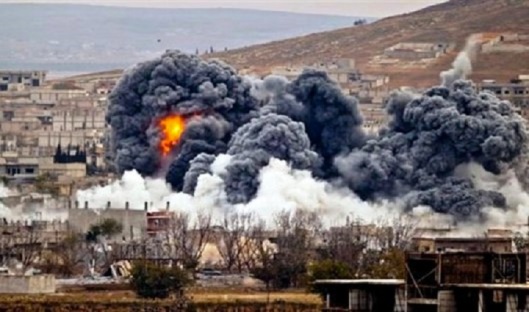 The Foreign and Expatriates Ministry addressed new letters to the chiefs of the UN and the international Security Council over the constantly repeated attacks of the US-led coalition against Syrian territory and civilians.

The recent crime committed by the coalition, within a series of repeated attacks on civilians and infrastructure in Syria for the past several months, took place on Wednesday, as the coalition’s warplanes shelled al-Sout town in the countryside of Deir Ezzor with the internationally-banned white phosphorus , claiming the lives of a number of civilians and leaving others injured, the Ministry complained.

A day before, the coalition’s air force committed a massacre in Markada town to the south of Hasaka city, killing Syrian civilians, including two women, and 6 members of an Iraqi family that had moved to Hasaka from Mosul, the Ministry added.

While expressing its strong condemnation of the coalition’s attacks, “war crimes and crimes against humanity”, Syria regrets that some countries that claim to respect human rights and the international law remain acting members of this coalition, the Ministry said in its letters.

Syria “calls on these countries, which we got used to hearing their voices and demands for an end of all forms of aggression and for respect of human rights and the international humanitarian law, to withdraw from this coalition that has marred [these countries’] reputation and shed plenty of the Syrians’ blood in their name,” the letters read.