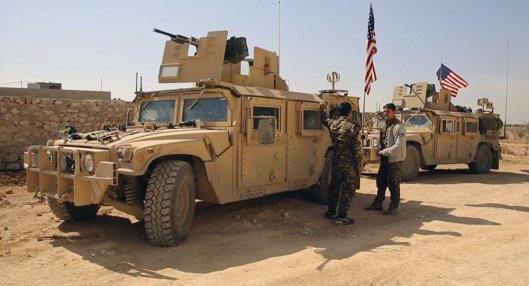 The Russian Defense Ministry has raised the issue of some 300 Daesh terrorists on pickup trucks infiltrating a US-controlled zone in Syria’s al-Tanf region.

The Russian Defense Ministry has urged “the US side to explain its selective blindness regarding militants” operating near US forces in Syria.

The ministry’s spokesman said the 300 Daesh militants had tried to block a strategically important road linking Damascus and Deir ez-Zor, which is used for delivering humanitarian aid to civilians and supplies for the Syrian Army.

Aid for Militants: U.S. to Be Responsible for Sabotage of Peace Process in Syria

Maj. Gen. Igor Konashenkov said that the truce in the southern de-escalation zone in Syria could be undermined after the relocation of 600 militants and two convoys with medical aid into the area.

“Considering such significant reinforcements in terms of manpower, medicine and food, with tacit US approval, one does not have to be an expert to forecast an attempt to derail the truce in the southern de-escalation zone,” he said.

According to the spokesman, on October 2-3 a group of 600 militants, previously based in the Rukban refugee camp, located in the American-controlled al-Tanf zone, headed westward in SUVs, and after covering some 300 kilometers entered the southern zone of de-escalation through a former border control point on the Syria-Jordan border in Daraa.

“By another ‘strange’ coincidence, almost simultaneously, two convoys [30 and 60 metric tons, respectively] carrying medicines and products for the local population entered this de-escalation zone… All humanitarian aid that arrived and, above all, medicines, was unloaded and is under control of the militants who came from al-Tanf. At the same time, according to the available information, these settlements are under the control of al-Nusra Front ‘sleeper cells’,” he said.

Konashenkov said that meant that the 600 militants who arrived from the US-controlled zone in al-Tanf were either sent to fight these ‘cells’ for medicines and food, or act jointly with them.

The spokesman underscored the US would solely bear all the responsibility for sabotaging the peace process in Syria.

U.S. Actions in Syria Look Like an Attempt to Split the Country

In his turn, Director of the North America Department at the Russian Foreign Ministry Georgiy Borisenko told Sputnik that US actions near the al-Tanf base in Syria are reminiscent of an attempt to divide the war-torn state:

“Of course, we have a lot of questions about what the Americans are doing in Syria. Unlike the Russian forces, they are there in violation of international law,” Borisenko said in an exclusive interview.

“They even establish certain zones, for example, in the al-Tanf area, where they refuse to allow  the forces of the legitimate government. In fact, this is reminiscent of an attempt to divide the country, and split Syria in order to create governing bodies controlled by the United States and its allies in certain part [of Syria],” the Russian diplomat stressed.

He recalled that the Russian Defense Ministry, “on the basis of available objective data, draws attention to the fact that in fact, the Americans and the opposition units oriented toward them are actually not fighting Daesh militants.

“We are surprised about it. We will further monitor the situation, but we proceed from the assumption that any flirtation with terrorists is always dangerous and will turn against those who play such games,” Borisenko pointed out.

The memorandum on the establishment of four de-escalation zones in Syria was signed in Astana in May 2017. Russia, Iran and Turkey act as the guarantors of the ceasefire process.

According to Borisenko, Moscow is alarmed over “the support the US is giving to the forces opposing the legitimate government of Syria.”

“Since 2014, we have seen the US military’s fictitious strikes on terrorists, something that suggests that the US is more concerned about overthrowing the Syrian government rather than combating Daesh,” he said.

Borisenko added that right now, “the US seems to continue to strive to implement this task, set by [former US President] Barack Obama.”

Since September 30,2015, Russia has been conducting airstrikes in Syria at the request of the country’s government to help its fight against terrorists.

At the same time, the US-led coalition is conducting airstrikes, ground-based and rocket-propelled artillery fire against Daesh in Syria, which hasn’t been authorized by the government of President Bashar Assad or the UN Security Council.

1 thought on “Washington have to explain why 300 Daesh apes infiltrated the U.S.-occupied al-Tanf Syria’s region”