The Russian Defense Ministry “has questions” about the sudden move of the anti-Daesh coalition to help civilians in Raqqa.

“[The only explanation of this] is an aspiration to quickly cover up the tracks of the barbaric bombings of the United States and the coalition’s aircraft that have buried thousands of civilians liberated from the Islamic State [Daesh] under the ruins of Raqqa,” Russian Defense Ministry spokesman said.

“Raqqa has not managed to cool down after bombings of the international coalition and the high-ranking officials from Washington, Paris and Berlin have started making statements about the urgent allocation of tens of millions dollars and euros to Raqqa. These millions should allegedly help to restore peaceful life in the city. We welcome such generosity, but we have questions,” Konashenkov said Sunday.

According to the official, over the past two years, Russia has repeatedly asked the United States and European nations to send humanitarian aid to the Syrians affected by war, and has also prepared a list of settlements, where this assistance is needed most of all, without dividing Syrians into “bad” and “good” ones. However, the response was always negative, Konashenkov added.

“[The only explanation of this] is an aspiration to quickly cover up the tracks of the barbaric bombings by the United States and the coalition’s aircraft that have buried thousands of civilians liberated from the Islamic State [Daesh] terrorist group under the ruins of Raqqa,” Konashenkov added. 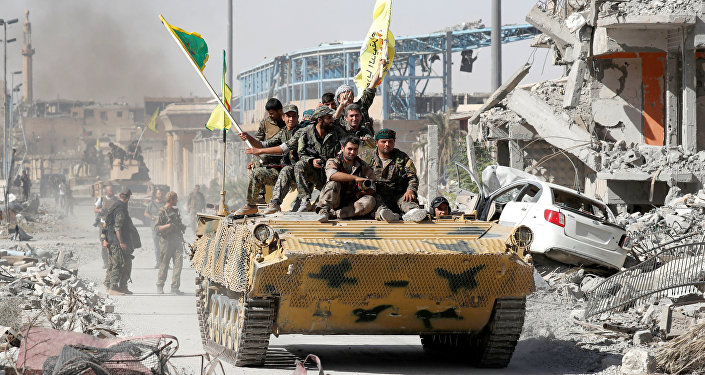 The spokesman added that the statements made by the US authorities, including the White House, the Pentagon and the State Department, about the crucial role of the Raqqa’s liberation in the struggle against the terrorists and the contribution of the US-led coalition to this fight, also could puzzle.

He assumed that Washington might consider Raqqa was the only place controlled by Daesh in Syria, “a provincial town, with the prewar population of about 200,000 and with the population of no more than 45,000 before the beginning of the coalition’s operation to liberate it that lasted for five months.”

At the same time, Konashenkov claimed, the Syrian army supported by the Russian Aerospace Forces liberated the city of Deir ez-Zor in 10 days, while it was inhabited by more than 500,000 before the conflict.

On Friday October 20, the US-backed Syrian Democratic Forces (SDF), along with US President Donal Trump announced the defeat of Daesh by alliance of Kurdish and Arab militias. The US president called the victory a “critical breakthrough” and announced that a “transition into a new phase” would be forthcoming.

President Trump issues statement on Syrian forces recapturing Raqqa from ISIS. “The end of the ISIS caliphate is in sight.” pic.twitter.com/nOzQSsqfQB

Raqqa has been under Daesh control for four years, since 2013. In early June the SDF and the anti-Daesh coalition launched an operation to liberate the “capital” of Daesh self-proclaimed caliphate.

Russia, along with other countries, has been taking numerous steps to settle the Syrian crisis which turned violent since the 2011 Arab Spring protests. These efforts included humanitarian aid to Syrians and contributing to the restoration of the country.

Syrian Army during an offensive operation to the east of Deir-ez-Zor near cemeteries. © Sputnik

The United States is losing ground, both in Syria and Iraq, and it wants to hold on to whatever it can in order to enter into negotiations later on, Jamal Wakeem, international relations professor, Lebanese University, told RT.

Syrian troops on Saturday liberated the city of Al-Mayadeen in Deir ez-Zor province from ISIS, according to the Russian defense ministry.

RT:  How long could it take to liberate this remaining 8% of Syrian territory from ISIS?

Jamal Wakeem: I believe that ISIS had collapsed and to liberate the remaining eight percent is a matter of time. But I believe at the same time that the big challenge for the Syrian army and their allies is mainly the American interference in northeastern Syria, because they are backing Kurdish troops to control that area and call for an autonomous region there in order for the US to have an area of influence in northeastern Syria. The liberation of  Al-Mayadeen is a very important achievement for the Syrian army, because it strengthens its grip on one key city that lies on the line of communication that links Syria to Iraq, on the one hand, and at the same time it strengthens the position of the Syrian army in Deir ez-Zor, and it gives the Syrian army better access to northeastern Syria, in order to obstruct the attempts of the Americans and their allies to have like an autonomous region in northeastern Syria – specially at the time when the Kurdish forces have taken over Raqqa, and they have let ISIS forces to withdraw from the city with the objective of heading eastward in order to block the Syrian army from achieving major successes towards linking with Iraq.

RT:Al-Mayadeen was liberated relatively quickly, in comparison with Deir ez-Zor, several parts of which are still under ISIS control. What have been the main differences in the two operations?

JW: First of all, Al-Mayadeen is a much smaller city than Deir ez-Zor. At the same time, the plan of ISIS was to hold on to Deir ez-Zor in order to obstruct the attempt of the Syrian army to have a strong position on the Euphrates in order to cross to the northern area of Syria. That’s why they focused on Deir ez-Zor and they gave less importance to Al-Mayadeen – this was one factor. Another factor was that the Syrian army was pressing in Deir ez-Zor, and at the same time was launching another attack on Al-Mayadeen. I believe that this was the main reason and of course we need to mention the support of the Russian air force and the Russian military experts, and of course Iranian forces fighting alongside the Syrian army.

RT:In the city of Raqqa, where the US-backed anti-ISIS operation is ongoing… the Russian military say the coalition is using the wrong tactics, as they’re trying to destroy the city’s water supplies, which could of course impact greatly on civilians. Do you agree?

JW: The tactic used by the US forces – whether in Syria or in Iraq – is to cause as much damage as possible to make the cities that get liberated from ISIS hard to rebuild and to reconstruct. At the same time, they want to turn the issue of the civilians and their needs as a mean to obstruct further advances of the Syrian army – especially that the US is losing ground, both in Syria and Iraq, and it wants to hold on to whatever it could in order to enter into negotiations later on. So I believe that this was the case similar to what happened in the western part of Mosul, for example, where the American forces bombarded the city and destroyed up to 80 percent of the western quarter of Mosul.

In Maps: Liberation of Mayadin City from Daesh by SAA

Syrian troops have captured Al-Mayadeen in Deir ez-Zor province, one of the last strongholds still remaining in the hands of Islamic State (IS, formerly ISIS/ISIL), Russia’s Foreign Ministry has confirmed.

“The assault units of the Syrian army, commanded of by General Hassan Suheil, overcame fierce resistance of terrorists in the central and southern districts to completely liberate the city,” he added.

The spokesman stressed that Al-Mayadeen was the largest city under IS control in the Euphrates Valley and the main terrorist stronghold in eastern Syria.

The terrorists deployed the most efficient reserves from Iraq to defend the city, and their defeat provides Damascus with conditions to further facilitate success on the battlefield.

According to the spokesman, Syrian forces are continuing their advance on terrorist positions with Russian air support.

The city of Al-Mayadeen lies south of Deir ez-Zor’s provincial capital. Over the past months, it has seen fierce fighting between Islamic State and Syrian forces trying to push the Islamists from the small swath of land they held.

On Friday, the Russian General Staff announced that Islamic State now controls less than eight percent of Syria due to major successes of the Syrian troops.

The liberation of the strategic city of Al-Mayadeen is a “very important achievement” for the Syrian military, Jamal Wakeem, a Lebanese professor of history and international relations, told RT.

Al-Mayadeen is “a key city that lies on the line of communication that links Syria to Iraq,” he said, adding that “at the same time [this success] strengthens the position of the Syrian Army in Deir ez-Zor.”

The successful actions of the Syrian troops in the west of the country are in sharp contrast to the “stupor” of the US-coalition, which has been unable to complete their counter-terrorism operation in Raqqa for months, Konashenkov said.

“The carpet bombings of residential areas by the US and the coalition as well as deliberate destruction of all natural sources of water supply in Raqqa have so far resulted in nothing, but thousands of victims among the ‘liberated’ population and stark examples of faulty planning of military operations,” he said.

Meanwhile, a member of the Raqqa Civil Council told Reuters on Saturday that the remaining Islamic Sate fighters are going to leave Raqqa “tonight.”

The terrorists will be taking 400 civilians with them as human shields, in accordance with the deal proposed by the US, he said.

The operation to liberate Raqqa, Islamic State’s de facto capital in Syria, started on June 6 and was carried out by the so-called Syrian Democratic Forces, with US-led coalition air support.

It led to vast destruction and numerous casualties in the city, with Human Rights Watch and other groups blaming the US-led coalition of not taking the necessary precautions to preserve the lives of civilians.

The US operation in Raqqa is dragging on because the Americans “aren’t really up to scratch in the game that Daesh [Arabic pejorative term for Islamic State] is playing,” Ammar Waqqaf, founder and director of Gnosos consultancy, told RT.

Waqqaf said that the Americans “bombed and stopped” the buses which were taking the retreating Islamic State fighters from eastern Lebanon to Deir ez-Zor in accordance with the deal with Syria, Lebanon and Hezbollah in early September.

“And this backfired as there’s apparently an agreement for the remaining Daesh forces to leave Raqqa, but they’re refusing to go out without taking civilian hostages with them,” he said.

In a way, it’s the Americans which are “forcing Daesh – even if they’re not necessarily wishing so – to hide behind civilians,” Waqqaf stressed.