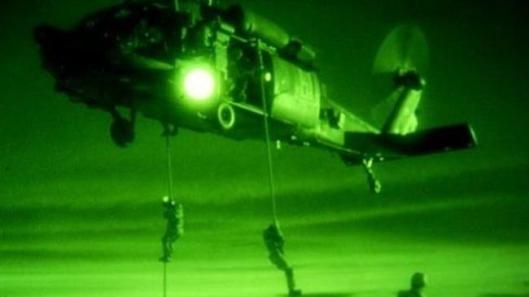 (South Front) ~ The Russian state-run media has accused the United States of evacuating ISIS commanders from the city of Mayadin before it was liberated by the Syrian Army in October.

According to RIA Novosti (a Russian version of Sputnik), US helicopters have evacuated ISIS commanders from the citiy before the launch of the Syrian army’s operation.

The outlet cited an alleged eyewitness to confirm this statement:

“American military aviation first made a maneuver in the area […] near a Mayadin farm. Then [ the aviation] launched an airstrike, we tried to hide and saw several US helicopters. There were foreign Daesh [ISIS] commanders on the ground, who were waiting for them next to their headquarters… The helicopters took them outside of Mayadin.”

“US aviation… first a sound from it, then a massive strike that was followed by the US helicopters’ flight and transportation of Daesh leaders after which the airstrikes ceased,” the outlet quoted the 79-year-old eyewitness. The manhad reportedly served in the Syrian Army and can distinguish US aircraft.

The outlet also cited other locals that allegedly seen how cars transported two foreign ISIS commanders with their families from Mayadin to the local headquarters. Then helicopters reportedly arrived and took them in an unknown direction.

This was not the first time when Russian sources accuse the US of providing at least unofficial support to ISIS in Syria.

Earlier, the Russian Defense Ministry reported that it was observed little or almost no fighting between US-backed forces and ISIS on the eastern bank of the Euphrates, north of Deir Ezzor, and accused the US-led coalition of turning the US-held at-Tanf area at the Syrian-Iraqi border into a “black hole” used by ISIS for raids against government forces.

(SANA) ~ U.S. helicopters evacuated leaders of daesh (ISIS, ISIL, IS) mercenary-terrorists from al-Mayadeen city prior to the arrival of the Syrian Arab Army to the city.

Mohammad Awad Hussein, a local from the city, said that the US helicopters were first seen circling the area near a farm then they fired shells, while other helicopters landed and transported ISIS leaders of foreign nationalities that had been waiting for the helicopters on the ground.

Other locals said that they saw two cars transporting two foreign ISIS leaders and their families to the location where a group of terrorists were positioned until US helicopters arrived and took them to an unknown destination.

Evidence of U.S. support to terrorists
in Syria and Iraq continues to emerge:
U.S. Controversial Actions in Syria Raise Questions

Washington have to explain why 300 Daesh apes
infiltrated the U.S.-occupied al-Tanf Syria’s region

Aerial footage shows U.S. Forces present side by side
with Daesh in terrorists held areas in Syria