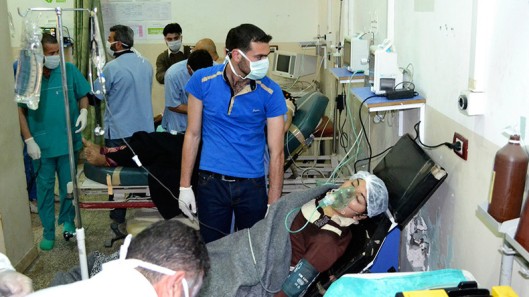 A woman affected by what ‘activists’ say was a gas attack on the town of Telminnes, Syria [© Reuters]

The report on the chemical attack in Idlib in Syria has some very shaky conclusions, says journalist Rick Sterling, of the Syria Solidarity Movement. In his view, it’s obvious the opposition, not the government that had a motive for such an attack.

The OPCW-UN joint mission investigating the Khan Shaykhun chemical attack in Syria in April 2017 found government forces to be responsible. The watchdog says it looked into various scenarios, questioned hundreds of witnesses and examined thousands of pictures and files. However, it stressed it never visited the site of the attack.

According to Rick Sterling, the investigators “have got a very shaky conclusion, and even their report indicates that in a number of areas; irregularities is definitely an understatement.” Sterling said: “Inside the report, it’s acknowledged that there were 57 victims transported to five different hospitals before the attack even happened. So how do you have a victim of an attack before it happens?”

“In addition to that, in any investigation, an essential component of it is looking at motive. Who has a motive for a chemical weapons incident in Syria? Obviously, it is the opposition. The Syrian government has every motive to prevent or to never have that happen,” the journalist concluded.

Ivan Eland, US defense analyst and author argues that “investigating something on an active battlefield, it’s not always possible to visit the site.”

While visiting a site is a big help in investigations like this, he said, “it doesn’t mean though that it’s impossible to find out who” was committed a crime. “But it’s sort of a problem, I think,” he added in his comment to RT.

The Syrian war “has been a nasty mean conflict on both sides, and I don’t think either side is blameless,” Eland said.

Meanwhile, the EU is considering new sanctions against Syria in the wake of the report. Discussing the issue with RT, Ammar Waqqaf, director of the GNOSOS think tank, said: “There has been pressure all along the way. If you visit Damascus like, for example, I do, or any other part of Syria that is under government control, let alone those that are outside government control, people are really suffering because of these sanctions.”

“What is important for these countries is to keep themselves in the game. They probably believe that if we mount more pressure than we would get some forces, the Syrian government force, the Russian force, whoever is backing that sort of alliance, to back down and give us some benefit,” Waqqaf added. But that, he said, is not about caring about the Syrian people. “Yes, they might have refugees, yes they might have issues, they want all these refugees to go back to Syria, but then they need to let go of Syria.”

Waqqaf told RT that “the government is not going to fall, there are enough Syrians, who support the government and they won’t let it fall.” Added he: “They probably should listen to very wise, in my personal opinion, words of the Chinese envoy in the Security Council… he said there is a certain momentum in the political process that is taking place right now and that the members of the Security Council should focus on making that a success.”

“But nobody cares about that. All they want to do is to maintain influence and keep themselves at the table. They are willing to use every single opportunity at their disposal,” Waqqaf said.