Syrian Arab Army units operating in Deir Ezzor achieved a new advance for uprooting ISIS terrorists from the eastern bank of the Euphrates River after entering into al-Boukamal city and engaging in fierce clashes in the neighborhoods of the city.

SANA reporter said that the army units and the allies’ forces stroke ISIS fortifications and entered the city of al-Boukamal, paving the way for completely eradicating ISIS terrorists from the city.

The reporter added that progress towards al-Boukamal city has been achieved after the army units and its allies met with Iraqi forces at the joint border after clearing the area of the collapsed remnants of ISIS terrorists.

According to the reporter, large areas where ISIS spreads are currently encircled as a result of the forces’ meeting, which is extended between the Second Station and al-Baajat in Syria and al-Aakashat t in Iraq.

The reporter added army units and supporting forces tightened noose on ISIS dens in al-Boukamal city totally and began intensive operations to root out their last gatherings in the city, which considers as one of the main strongholds of the terrorist organization in the southeastern countryside of Deir Ezzor.

The Iraqi military allowed the Syrian military and their allies, including Iraq’s Hashd Al-Sha’abi (Popular Mobilization Units), to attack the Isis positions inside the border-city of Albukamal on Wednesday.

The Syrian Army and their allies were able to enter Albukamal’s eastern district from the Iraqi border-city of Al-Qa’im on Wednesday, prompting Isis to abruptly retreat from the area.

Al-Qa’im was liberated by the Iraqi Armed Forces last week; it was the location of the Isis’ most important border-crossing into Syria’s Deir Ezzor Governorate.

With both Albukamal and Al-Qa’im liberated, the Syrian and Iraqi governments now share an imperative border-crossing that will allow for continued commerce between Baghdad and Damascus. 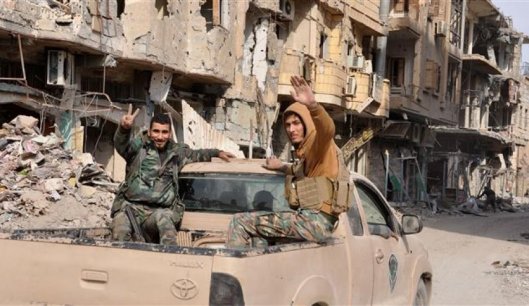 The Syrian forces along with allied fighters from Lebanon’s Hezbollah resistance movement have liberated Bukamal, the last major Isis-held town in Syria.

“The last stronghold of Isis, Bukamal, is free of the Isis organization,” said the Syrian commander of the operations on Wednesday night.

Hezbollah fighters were “the foundation in the battle” he noted, adding that hundreds of the elite forces took part in the liberation operation.

Meanwhile, Syrian army units have reached Iraqi government stationed along the border of the town.

Reuters initially reported that Iraq’s Popular Mobilization Units (PMU) also had a significant role in capturing of the city but later retracted the statement after it was denied by the Iraqi forces.

“Our movements are carried out under orders from the commander in chief of the armed forces and our key objective is to liberate Iraq’s territories from Isis. We have no orders to cross the borders,” said spokesman Ahmed al-Asadi said.

Earlier, the Lebanon-based Arabic-language al-Manar television network reported that the Iraqi army and their allies crossed into the city, which is located in the country’s eastern province of Deir ezzor.

The Syrian army and its allies broke Isis’ three-year-old siege on Deir ezzor in September and fully liberated it on Friday.

Deir ezzor is the capital of an oil-rich Syrian province of the same name, which borders Iraq. The city used to serve as the main Isis’ stronghold in Syria after the terror group left Raqqah in the north to US-backed Kurdish militants.

Meanwhile, Syrian army units, in cooperation with back-up forces, established control over Blil village in the eastern countryside of the province.

SANA reporter in Hama said that army units, in cooperation with back-up forces, supported by artillery’s weapon, continued their operations in chasing terrorists of Jabhat al-Nusra in the northeastern countryside of Hama, restoring the village of Blil after the destruction of al-Nusra’s last dens and fortifications there.

The reporter added that army’s engineering units started to dismantle IEDs and landmines planted by the terrorists among the houses of the village.

The Syrian Arab Army, in cooperation with the supporting forces, launched wide-scale military operations against terrorists in northeast of Hama countryside with the goal of restoring safety to villages in al-Rahajan area and securing the Hama-Aleppo road.

In a statement to SANA on Wednesday, a field commander said that army units started military operations in this area on October 25th, with these operations focusing on destroying Jabhat al-Nusra’s fortifications along an area extending 30 km along the Hama-Aleppo highway from the north of Ethriya and Sheikh Hilal village on the highway.

The commander added that army units concentrated on eradicating terrorists, backed by the Syrian Air Force, through destroying terrorists’ command centers and targeting their vehicles and cars which come from Idleb to bolster the ranks of Jabhat al-Nusra terrorists.

He said that the Syrian Air Force eliminated a large convoy for Jabhat al-Nusra consisting of 8 heavy carriers transporting tanks which was coming from al-Boweider village 60 km north of al-Sa’en town.

The army units continued to advance to break through towards three areas: the area between al-Shahatiyeh and Khirbert Rasem al-Ahmar northwest of Ethriya, the area of Rasem al-Sawan north of al-Shiekh Hilal, and Jwai’ed in the center, putting large pressure on all fronts and inflicting heavy losses upon the terrorists, the commander added.

The army operations resulted in establishing control over a number of villages, particularly:

and finally the army established control over Sarha town, one of the largest al-Nusra strongholds after al-Rahajan.

The field commander pointed out that the army’s advancement in the northeastern countryside of Hama province will enable it to conduct further deployment in significant points that will provide fire control, prevent the advance of terrorists towards safe areas, and clear the villages in this area, particularly the strategic town of al-Rahajan.

Thanks to those achievements, the army was able to secure highway from the east of al-Sa’en to Ethriya after eliminating more than 100 terrorists affiliated to Jabhat al-Nusra and destroying a number of their vehicles, some of which were equipped with heavy machineguns. The army also dismantled scores of explosive devices and uncovered a field hospital which the terrorists had been using.

SANA reporter said Thursday that the army units resumed their military operations to root out the remaining of Jabhat al-Nusra terrorists, establishing control over al-Rashdyeh village and inflicting heavy losses upon the terrorists.