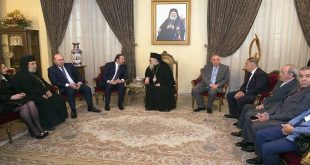 Delegated by President Bashar al-Assad, Minister of Presidential Affairs Mansour Azzam visited on Monday heads of Christian denominations and conveyed to them congratulations of President al-Assad on the occasion of Christmas.

In turn, the heads of the Christian denominations expressed their thanks and appreciation to President al-Assad for his generous gesture, invoking God to protect Syria and its people. 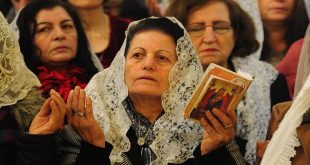 Christian denominations in Syria celebrated Christmas, the birth of Jesus Christ, the messenger of love and peace, on Monday by holding masses and prayers in churches.

A mass was held at St. George Syrian Orthodox Church in Damascus, headed by the Supreme Head of the Universal Syriac Orthodox Church, Mar Ignatius Aphrem II in which he talked about the sublime meanings of the Christmas.

Prayers and masses were also held in a number of provinces, including Lattakia, Sweida and Hasaka, highlighting the values of love, tolerance and peace that Jesus Christ brought to humanity and praying for God for security and stability to prevail over all Syrian territory.

The celebrations also included lighting the Christmas trees and decorating balconies and facades of homes in a message on the continuation of life.

Touring in the main squares of Damascus city gives you festive feelings where Christmas decorations are more visible this year as a result of the country’s recovery from terrorism.

Father Sami Hosni of the Church of Our Lady of Damascus said that a number of expatriates have returned to their homeland to celebrate Christmas with their families.

Entertainment activities for children focused on singing and dancing performances and distributing gifts were also a part of the city’s celebrations. 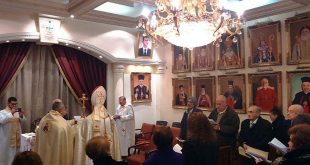 Aleppo locals are celebrating the 1st anniversary of defeating terrorism which coincides with Christmas celebrations through lighting up Christmas trees at the main squares and the houses announcing the return of peace and security to the city, and praying for the return of peace to every inch of the homeland.

Many of Aleppo locals, in statements to SANA reporter, expressed overwhelming happiness on the occasion of Christmas and the New Year, particularly that the celebrations this year are held in an atmosphere of peace and security after eradicating terrorism from the city.

The locals said that the Christmas this year has a special joy as the city is enjoying peace due to its heroic steadfastness to overcome terrorism. 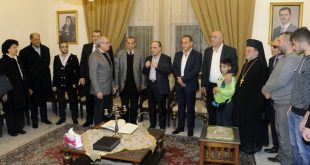 Prime Minister Imad Khamis visited on Friday the St. Gregory Orthodox Society for orphans and the elderly care, as he checked on their living conditions and the level of services provided to them.

He also accompanied the supervisors who gave him full details about the provided services and the needs of the residents.

“I am very happy to visit this establishment, which reflects the solidarity of the Syrian people in all circumstances and how they stand together to face difficulties.

I wish you a Merry Christmas in which love and peace prevails across our homeland and for all our people,” Khamis said.

He also said that all the needs of the Society will be secured to strengthen its role in the society, pointing out that its work is most noble example of humanitarianism.

The Prime Minister also attended a Christmas celebration at the Church of the Holy Cross performed by Al-Mahaba Choir.

Later, Khamis toured al-Qassaa area and met with citizens who were shopping for the holidays, stressing the need to keep prices within the normal range, especially during the holiday season. 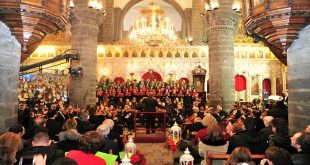 The oldest Eastern Church, the Cathedral of the Dormition of Our Lady, also known as al-Zeitoun Church, announced on Saturday the start of the Christmas holiday season.

The festivities began with a celebration titled “And the Joy Grows” hosted by the Cathedral of Dormition of our Lady in the al-Zeitoun quarter in the Old City. This event is the result of a joint work which is first of its kind between the Syrian National Orchestra and al-Farah Choir to celebrate the 25th anniversary founding the choir.

The Orchestra, conducted by Missak Baghboudarian, with al-Farah choir, conducted by Habib Suleiman, performed Arabic and international songs in their original languages representing the Christmas spirit. 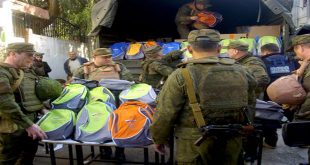 On the occasion of Christmas and New Year, Hmeimim-based Russian Coordination Center distributed on Friday school bags, stationery and milk to the children of the martyrs in Ghassan Zwan School and those of the Russian community in Lattakia and its countryside.

In a statement to journalists, an officer from the Syrian Arab Army who supervised the distribution process said that Russia’s support reflects the deep-rooted relations of friendship and cooperation binding Syria and Russia, adding that it conveys a humanitarian and moral message with the aim of bringing a smile to the faces of the children of martyrs who sacrificed their souls to defend Syria and eradicate takfiri terrorism.

In turn, Representative of the Russian Coordination Center noted that the gifts are presented by Russia’s children to fill the hearts of Syrian children with joy and happiness on the occasion of Christmas and the New Year, expressing hope to restore security and safety to the whole Syrian territory. 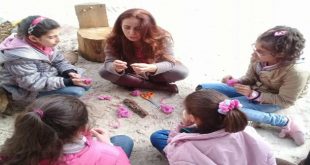 An awareness activity was lately held in Lattakia by Fronloq Reserve environmental education unit of the Directorate of Agriculture of Lattakia in cooperation with the National Association for Tourism Development in Syria.

The activity aimed at spreading the concept of sustainable tourism and educating children how to promote a tourist destination in their area and to develop their communities.

According to the awareness and education official of Fronloq Reserve unit, the activity of 20 children featured games and environmental education film in addition to a recycling workshop during which they made handcraft of woolen balls and pine cones to decorate the Christmas tree.

Chairwoman of the National Association for Tourism Development Sahar Hmeisheh said that the Association seeks to activate partnership with any governmental or private body to implement programs related to children who dealt with them through a number of artistic, educational and awareness activities.

A prayer for peace and security in Syria held at St. George Cathedral in Damascus 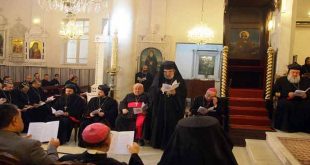 The Syriac Orthodox Patriarch of Antioch and All East Mar Ignatius Aphram II headed a joint prayer at St. George Cathedral in Bab Touma neighborhood in Damascus on Tuesday on the occasion of Christmas.

The prayer, which included all Christian denominations, was held for the intention of restoring security and peace in Syria and supporting the Church of al-Quds (Jerusalem) city.

Patriarch of the Melkite Greek Catholic Church Joseph Absi participated in the prayer along with a number of heads and representatives of Christian denominations in Damascus and the Ambassador of the Vatican in Damascus Cardinal Mario Zenari.

Father Jack Jacob delivered a speech in which he affirmed the noble meanings of the glorious birth of the messenger of love and peace, and called on all honorable people in the world to work to end the terrorist war against Syria, praying to God to preserve Syria and for the release of all abducted persons, including the kidnapped bishops John Ibrahim and Peter Yazigi.

In a statement read on behalf of the heads of the Christian denominations in Damascus on what is happening in Palestine, Patriarch Aphram II said the US President’s decision over al-Quds is unjust and contrary to UN resolutions.