(SouthFront) ~ On January 20, Turkey’s President Recep Tayyip Erdoğan said during a public speech in the central Anatolian province that the Turkish military operation against Kurdish militias in Afrin area has “actively begun in the field”. He added that the city of Manbij will be the next destination for the Turkish Army, according to the Turkish Hürriyet Daily newspaper.

The Turkish president also accused the US of not fulfilling promises it had made to Turkey regrading Manbij  and vowed to fight the Kurdish militants in the entire northern part of Syria up to the Iraqi border.

“The promises made to us over Manbij were not kept. So nobody can object if we do what is necessary … Later we will, step by step, clear our country up to the Iraqi border from this terror filth that is trying to besiege our country,” Erdogan said during his speech according to Hürriyet.

Erdogan also hinted that the US is changing the names of Kurdish forces in Syria in order to trick others and stressed that the Kurdish People’s Protection Units (YPG), the Kurdistan Workers Party (PKK) and the Democratic Union Party (PYD) are all considered terrorist groups by Turkey.

A huge convoy of Faylaq al Sham is on the way of Afrin. (Part1)

Meanwhile, Syrian opposition sources reported that the Turkish Army artillery continued shelling positions of the YPG on the Syrian-Turkish border around Afrin in northern Aleppo. In response, the YPG shelled the Turkish-backed Free Syrian Army (FSA) in Twice village east of Afrin with mortars, killing two FSA fighters, according to the Hawar News Agency (ANHA).

The Turkish Army also deployed more vehicles and tanks around Afrin area, which indicate that the Turkish side has not finished yet its preparations for the long-awaited military operation.

Turkish tanks moving along their base at the #syria border #afrin pic.twitter.com/KE7IvXZfsK 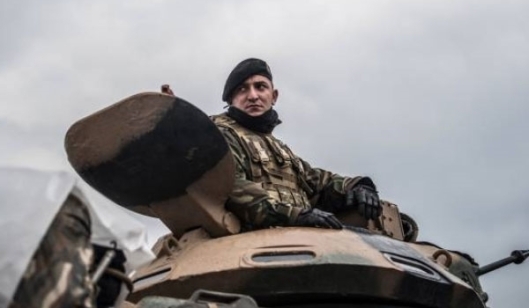 (FNA) ~ The Turkish armed forces have advanced into Azaz region East of Afrin within the framework of the Olive Branch Operation in Northern Syria, a Turkish media outlet reported on Monday.

The state-run Anadolu news agency reported that the Turkish army has continued its ground assault as the Olive Branch Operation entered its third day.

Anadolu said that the army men have advanced into the Azaz region too to expand the scope of the operation.

President Tayyip Erdogan said on Monday that Turkey would not take a step back from the operation in the Afrin region. He also said that Ankara had an agreement with Russia regarding its military operation against a US-backed Kurdish militia.

Speaking at an Ankara Chamber of Commerce awards ceremony, Erdogan stressed that he wants to support the national security and territorial integrity of Syria as Turkey “has no designs on territories of another country.” 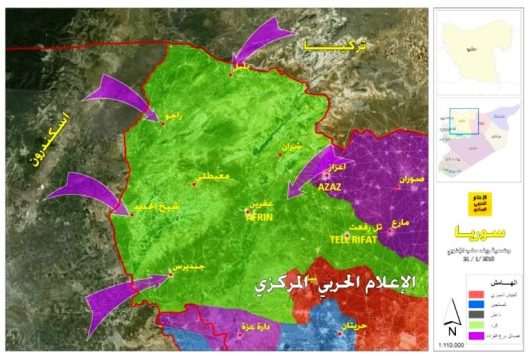 (SouthFront) ~ Following advances north and west of Afrin, the Turkish Armed Forces (TAF) and their proxies opened a new front against YPG/YPJ west of Afrin on January 22.

According to media and local sources, forces involved in Turkey’s Operation Olive Branch advanced from from the area of Azaz on the Barsaya Mountains and allegedly captured “multiple” points there. 10 members of Kurdish forces were reportedly captured.

Now the TAF and pro-Turkish armed groups are pressuring YPG/YPJ forces from the three main directions. 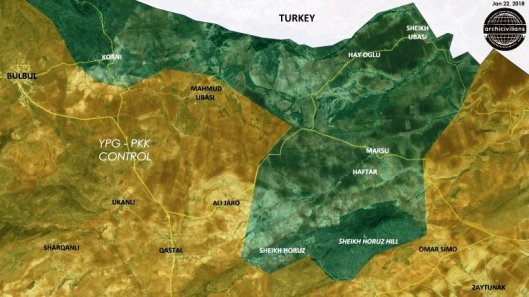 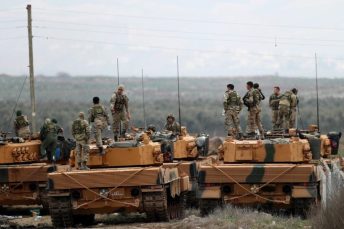