The army men, backed up by artillery units and Air Force, managed to beat terrorists back from the settlement of Khafiyeh West of the town of Abu al-Dhohour.

A number of terrorists were killed and their military hardware were destroyed in the attacks.

The army’s engineering units started defusing bombs and landmines in the newly-freed settlement.

The Army troops pushed terrorists back from 322 villages, towns and regions in a large region stretching among the provinces of Idlib, Hama and Aleppo in nearly a month of operation, killing almost 300 terrorists.

The army has freed 322 villages, towns and regions in 29 days of large-scale operation against terrorists in Southern Aleppo, Northeastern Hama and Southeastern Idlib.

297 terrorists, including 103 non-Syrians, from Al-Nusra Front (Tahrir al-Sham Hay’at or the Levant Liberation Board), the Islamic al-Turkistani Party and other groups have been killed in the army operation in the three provinces. 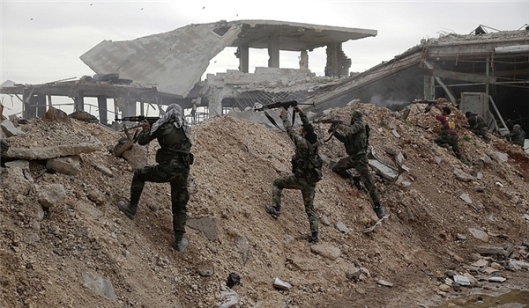 Al-Kayari, who was recruiting female fighters for a brigade under her command, was recently appointed as the commander of a battalion of gunmen too.

The terrorist groups suffered heavy casualties and their military hardware sustained major damage in the attack. 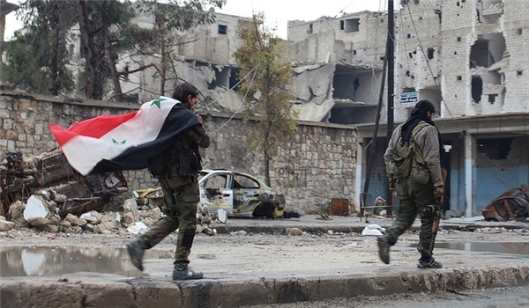 (FNA, 23/1/2018) ~ The Syrian Arab Army (SAA) troops beat terrorists back from six more villages in Southern Aleppo as part of their operation to expand the security zone around the newly-freed Abu al-Dhohour airbase in Southeastern Idlib, field sources said on Tuesday.

The terrorist groups suffered heavy casualties and their military hardware sustained major damage in the attack.

(SANA, 20/1/2018) – Syrian Arab Army (SAA) units reached Abu al-Dohour military airport along with advancing allied forces after restoring control over a number of strategic villages and hills, as Jabhat al-Nusra terrorists and groups affiliated to it flee the airport.

The Army’s engineering units are dismantling explosives planted by al-Nusra terrorists at the outskirts of the airport before they escaped.

The reporter said that the army units immediately fortified their positions in the village after dismantling the mines and explosive devices which terrorists planted before many of them were killed and injured while the rest fled to neighboring villages, as the Syrian Air Force and artily fired intensive strikes at the fleeing terrorists.

After regaining control over Umm Teena and the approaching rendezvous of the Syrian Army units and allied forces at the area of Umm Joura near Abu al-Dohour military airport, the terrorists will be trapped in a pocket that extends from southeast of Khanasir in Aleppo countryside to the west of Sinjar in Idleb countryside all the way to the south of al-Sa’an in Hama countryside.

In Idleb countryside, army units advancing towards Abu al-Dohour airport regained control over villages and hills in the southeastern countryside and continued their progress up to the southern fences of the airport.

The operations resulted in killing and injuring many terrorists and destroying their weapons and ordnance, and the engineering units dismantled explosives planted among houses and in the main and side roads.

The reporter went on to say that army units engaged in violent clashes with al-Nusra terrorists at the southern fences of Abu al-Dohour airport, advancing from the eastern and southwestern sides of the airport as the fortified positions and defense lines of the terrorists crumble rapidly and many of them are falling dead or injured.

A military source told SANA that army units clashed with terrorists from Jabhat al-Nusra and other affiliated groups after they attacked a number of military posts on the direction of al-Sarraf village.

The source added that 13 terrorists were killed in the clashes, in addition to destroying their arms and equipment including machinegun-equipped vehicles, cannons and mortar launchers.