On February 18, the Hezbollah media wing in Syria released a video threatening to strike Israeli offshore oil and gas operations in case of Israeli agression.

The video quotes remarks of the movement’s leader Nassan Nasrallah over the recent Israeli-Lebanese oil dispute issue over the Block 9 naval oil field:

“disable [Israel’s offshore oil installations] within hours… … …If you prevent us, we prevent you; if you open fire at us, we will open fire”,

he said in a ceremony commemorating Imad Mughniyeh, the party’s former military commander who was assassinated in Damascus in 2008. Nasrallah’s comments came amid rising tensions between Israel and Lebanon over maritime border and Lebanon’s alleged excavation attempts in Block 9 which Israel regards as part of its own territory.

The leader of Lebanon’s resistance movement Hezbollah has warned about Israel’s attempts to grab Lebanon’s energy resources. Sayyed Hassan Nasrallah stressed that the US is supporting Israel in its plots, urging the Lebanese nation to continue resistance against the occupying regime.

The remarks were made during a ceremony commemorating the death of Imad Mughniyeh, the party’s former military commander who was assassinated in Damascus in 2008.

The video shows the facilities of Karish, Tamar and Lavthan as targets of possible missile attacks. 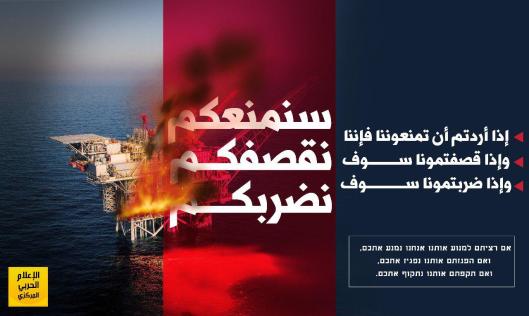 On February 16, Hezbollah leader Hassan Nasrallah said during a televised speech to commemorating the death of senior Hezbollah commanders that the decision to target and shoot down the Israeli F-16I warplane over Syria on February 10 was purely Syrian.

The movement’s leader denied that his party or Iran had played any role in the incident and revealed that the Damascus government had taken the decision to shoot down any Israeli warplane that attacks Syria’s territory few months ago.

“The Syrian government has decided to repel Israel’s aerial assaults. The decision to shoot down the plane was taken by the Syrian leadership and President Bashar al-Assad. Those who executed the order were the officers and soldiers from the Syrian Arab Army,” Nasrallah said in his speech, according to the Iranian Press TV.

Nasrallah’s statement was viewed as a response to several Arab news outlets that claimed the Israeli warplane had been shot down by Iranian officers or even Hezbollah members.

Regarding the recent Israel-Lebanese dispute over the naval oil field (Block 9), Nasrallah called on the Lebanese government to take “firm and strong” position on this matter and said that the US is not a honest mediator to solve this problem.

“Americans did not come to Lebanon to resolve the issue. They were here to defend Israel’s rights and to issue threats to Lebanese politicians,” said Nasrallah in a clear hint to the visit of US Secretary of State Rex Tillerson to Lebanon on February 15.

Nasrallah went on and warned Israel that Hezbollah has military capabilities to target the Israeli offshore gas and oil facilities within hours if the Lebanese government approves such an attack.

“If Lebanon’s Higher Defense Council were to decide that (Israeli) offshore oil and gas plants…should be forbidden from working, I promise they would stop working within hours,” Nasrallah said, according to Reuters.

Israel’s Defense Minister Avigdor Lieberman claimed on January 31 that the naval oil field (Block 9) is inside the Israeli waters and threatened the companies that are developing the oil field.

Experts believe that the Israeli-Lebanese dispute over the naval oil field (Block 9) will not develop into a military confrontation between the two sides. However, a political solution for this new crisis is will not likely see the light any time soon.