A leading Israeli investigative journalist has gone public with his suspicions that the January shootings in Paris were a false flag – and that Israeli Prime Minister Benjamin Netanyahu is a key suspect.

Barry Chamish, author of the bestselling “Who Murdered Yitzhak Rabin?”, made the remarks in a radio interview with this author, transcribed for the new book “We Are NOT Charlie Hebdo! Free Thinkers Question the French 9/11” (now available on Amazon).

Chamish also recently did a second interview in which the same suspicions were expressed.

Though a right-wing, pro-Zionist Israeli, Barry Chamish is known for his fearless exposés of corruption at the top of Israel’s power hierarchy.

When someone like Chamish, who hates Netanayahu’s Labor Zionist opponents with a passion, nonetheless singles out Bibi as a suspect in the Charlie Hebdo psy-op, it would seem that January’s false flag in Paris has backfired.

I cannot conform the authenticity of a letter written by Irans Supreme Leader, Ayatollah Sayyed Ali Khamenei, ‘To the Youth in Europe and North America’, but it has been printed in many news formats. I will share it with you…
Nevaehwest

By Jay, Jay’s Analysis [com] Sibel Edmonds has done extensive research on Gladio B and has recently made connections between …

A very good analysis of the ‘Charlie Hebdo’ events, by Nikolai Starikov, writer on geo-politics and international finance.

The hysteria surrounding the Paris caricature publications and subsequent terrorist atrocities is an engineered confrontation for geo-political goals, having nothing to do with freedom of speech.

In the name of the “Freedom of Speech”. French comedian Dieudonne has been arrested after writing a Facebook comment, not because he has incited hatred or terrorism, not because he has offended or outraged someone, but simply for a satirical and sarcastic comment on Facebook. all this is tragically comic.

Russian Foreign Minister Sergey Lavrov said on Monday that last Wednesday’s attack on a French Charlie Hebdo magazine was committed by terrorists who had been members of the West-backed terrorist organizations in Syria.

The Commissioner Fredou was working on a mission of the police as part of the Charlie Hebdo affair.

He killed himself before completing his report.

(Tony Cartalucci – LD) Corroborating claims by French security agencies, a bizarre interview conducted just before the death of terror suspect Chérif Kouachi reveals that he had been in Yemen and in direct contact with none other than Anwar Al Awaki – the notorious Al Qaeda leader allegedly killed in a drone strike in Yemen in 2011.

Not only was Anwar Al Awlaki a senior leader in Al Qaeda, he also infamously spent dinner with top brass at the Pentagon shortly after the September 11, 2001 attacks in Washington, New York, and over Pennsylvania.

CBS News would report in their article, “Qaeda-Linked Imam Dined at Pentagon after 9/11,” that:

A French newspaper has published the following cartoon, as a result of the terrorist attack in Paris at the Charlie Hebdo. 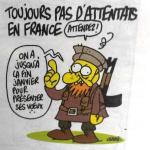 By The Shaker, Vineyardsaker ~ Okay, let’s be clear. I am not Muslim. I oppose terrorism. I don’t even support the death penalty. I loathe Takfirism. I oppose violence as a means to make a political or ethical point. I fully support freedom of speech, including critical speech and humor.

But this morning I am most definitely NOT Charlie.

In fact, I am disgusted and nauseated by the sick display of collective hypocrisy about the murders in France. Here is why….

Syria has repeatedly warned of the dangers of supporting terrorism, especially that targeted Syria and the region, and warned that this terrorism will fall back on its supporters as events and threats, and that (terrorism) affected more than a European city confirms deficiency of the European policies and its responsibility for the bloodshed in Syria

Putin did it. Sorry, he didn’t. In the end, it was not Russia “aggression” that attacked the heart of Europe. It was a pro-style jihadi commando. Cui bono?

And the icing on the lethal cake; faultless Paris-based logistical support to pull that off. A former top French military commander, Frédéric Gallois, has stressed the perfect application of “urban guerrilla technique” (where are those notorious Western counter-terrorism “experts” when one needs them?)

They might have spoken perfect French; others said it was broken French. Anyway, what matters is that they uttered the magic word; “We’re al-Qaeda.”

Better yet; they told a man in the street, “Tell the media that this is al-Qaeda in Yemen”, which means, in American terror terminology, al-Qaeda in the Arab Peninsula (AQAP), which had Charlie Hebdo’s editor/cartoonist Stephane Charbonnier (“Charb”) on a hit list duly promoted by AQAP’s glossy magazine Inspire. Accusation: “Insulting the Prophet Mohammed.”

And just to make sure everyone had the perpetrators implanted on their brain, the killers also said, “Allahu Akbar”; “We have killed Charlie Hebdo”; and “We have avenged the Prophet.”

Tony Cartalucci, New Eastern Outlook” ~ In an all too familiar pattern and as predicted, the shooters involved in the attack in Paris Wednesday, January 7, 2015, were French citizens, radicalized in Europe and exported to Syria to fight in NATO’s proxy war against the government in Damascus, then brought back where they have now carried out a domestic attack.

Additionally, as have been many other domestic attacks, the suspects were long under the watch of Western intelligence services, with at least one suspect having already been arrested on terrorism charges.

The implications of yet another case of Western-radicalized terrorists, first exported to fight NATO’s proxy war in Syria, then imported and well-known to Western intelligence agencies, being able to carry out a highly organized, well-executed attack, is that the attack itself was sanctioned and engineered by Western intelligence agencies themselves.

This mirrors almost verbatim the type of operations NATO intelligence carried out during the Cold War with similar networks of radicalized militants used both as foreign mercenaries and domestic provocateurs. Toward the end of the Cold War, one of these militant groups was literally Al Qaeda – a proxy mercenary front armed, funded, and employed by the West to this very day.

By Tony Cartalucci, ‘Land Destroyer’ – France, as part of a NATO-led coalition, has been arming, funding, aiding, and otherwise perpetuating Al Qaeda terrorists for years, beginning, on record in Libya with the overthrow of Libyan leader Muammar Gaddafi and continuing until today with NATO’s arming, harboring, and backing of Al Qaeda terrorists including the so-called “Islamic State” (ISIS) within and along Syria’s borders.

With the recent attack in Paris likely the work of the very terrorists France has been arming and backing across North Africa and the Middle East, the French government itself stands responsible, guilty of the continued material support of a terrorist organization that has now killed French citizens, including two police officers, not only on French soil, but within the French capital itself.

Unconfirmed reports stated that three men have been arrested by French police in relation to the terrorist attack and the massacre of 12 people, including 4 cartoonists of the Charlie Hebdo Magazine in Paris.

CNN and The Guardian are citing sources as saying the three suspects, three Algerian brothers aged between 18 and 34, were seized after hours of manhunt.

Their ID was leaked to social media, after one reportedly left it in their getaway car, a Citroen C3, which they were forced to abandon after a crash.

The latest tweet on Charlie Hebdo’s account was a cartoon of the so-called “Islamic State” militant group leader, Abu Bakr al-Baghdadi and it is believed it is a rael reson for this attack.