(submitted by ‘the old sniper‘)

A sign of the upcoming collapse of America-central financial system is a crisis of the US national debt. You can see that this debt is growing exponentially. And any mathematician who looks at this graph will say that that the system has entered a critical phase and is in danger of self-destruction.

Undoubtedly the United States will wage the battle for leadership “until the last Ukrainian”, as they say now. Not accidentally they chose Ukraine as a tool of attacking Europe and Russia. Launching a world war is necessary for the Americans in order to preserve their hegemony in the world through strengthening control over Europe by imposing the Trans-Atlantic free trade agreement; establishing control over Russia and Middle East, thus expanding their competitive advantage in the battle for leadership with the Asian countries.

“The US Air Force will permanently base the F-35 Joint Strike Fighter in Europe and the secretary of defense has selected RAF Lakenheath in the United Kingdom as the first location to host two squadrons of F-35s,” Assistant Secretary of Defense for International Security Affairs Derek Chollet said at a press conference.

The F-35s placement will lead to more collaboration, training and support opportunities between the US and the United Kingdom, the Defense Department said. 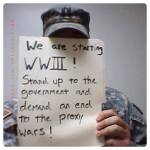