President Bashar al-Assad and the Syrian state’s request of support from Federal Russia in combating terrorism flowing from all countries in the world, was logical and logical in its timing, since the US has been talking about an alliance against terrorism for months ago, but the US-led alliance had proven to be ineffective on the ground, Presidential Political and Media Advisor Bouthaina Shaaban affirmed.

In an interview with Russia Today TV Channel on Wednesday, Shaaban added that the Russian vision carries a deep understanding of what is happening in Syria and the region, and that the terror poses a threat against the whole world, calling on everyone to listen to what Russian President Vladimir Putin is saying about Syria and the region.

She said if the West joins Russia’s awareness, it will recognize that fighting terrorism in Syria is a need for the region and the world.. But the problem is in the West’s late understanding of what is happening in Syria.

Presidential Political and Media Advisor Bouthaina Shaaban said the West has retracted on Syria and its media is trying to save some face.

Bouthaina Shaaban: ““For the first time the West finds that when it wants to do something it can’t”

Yet, she added, the Western media, which has the most control of information, is trying to throw dust in the eyes “so that to provide a sort of cover for the retreat in the Western attitude.”

“Plenty of the statements made are for taking a turn and saving face,” she noted.

“There can’t be a political solution in Syria without eliminating terrorism,” Shaaban added.

President Putin: “It’s my deep belief that any actions to the contrary in order to destroy the legitimate government will create a situation which you can witness now in the other countries of the region or in other regions, for instance in Libya, where all the state institutions are disintegrated. We see a similar situation in Iraq”.

It is important what you do for your country, not the names you are being called, Russian President Vladimir Putin told CBS’s ‘60 Minutes,’ saying that the nickname ‘tsar’ does not fit him.

Charlie Rose sat down with Putin to discuss, among other issues, how the world views the Russian leader. CBS has published a preview of the interview.

Rose pointed out that some people have been referring to Putin as a ‘tsar.’ Putin responded that people call him various names, but added he believes the description “does not fit me.”

“It’s not important how I’m called, whether these are well-wishers, friends or political opponents. It’s important what you think about you, what you must do for the interest of the country which has entrusted you with the position as the head of the Russian state.”

* * As a respected Islamic leader, Dr Hassoune rejects the concept of the Holy war. He says the violence …

* * Published on 10 Aug 2012 by Ryuzakero To Anonymous, Message from the International Bankers (parody but truth) Original …

* ENG – We don’t understand why our western partners refuse to condemn the terrorist attack in Damascus. Moreover, Susan …

* * Everytime when there is a meeting in the Security Council there is a Massacre. A massacre that should …

* * Uploaded by Ryuzakero on Feb 5, 2012 This video shows: A)the reality of Syrian Observatory composed by a …

* LATTAKIA, (SANA)- A military unit positioned north of Lattakia on Saturday confronted an infiltration attempt of an armed …

* MOSCOW, (SANA)_The Russian Foreign Minister Sergei Lavrov said that ending violence as announced according to the plan of the …

* Following are excerpts from an interview with Syrian cleric Sheikh Muhammad Badi’ Moussa, which aired on Al-Hekma TV on …

Exposed: Canada – Israeli flag in a pro-Assad rally? Just an other disgusting trick from FSA mercenaries * * …

* Al-Jazeera Correspondent in Beirut Resigns over Biased Coverage of Syrian File BEIRUT – Mar 07, 2012 – Upset with its …

* * DAMASCUS, (SANA) – The Syrian Foreign Ministry said that armed terrorist groups have been present in Syria ever … 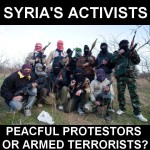 * An armed Terrorist Group on Monday shelled with mortars a military educational Complex in Homs, claiming the lives of …