New Daesh propaganda video shows an orphanage full of children who’s their terrorists parents have been killed and now are being trained as the next generation of Daesh terrorists. 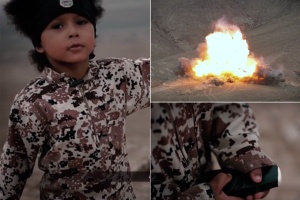 The clip which is produced in Nineveh province of Iraq, initially starts by showing the Daesh orphans playing with toys and being fed. Then showing a group of young boys carry out military exercises.

The clip has been labelled as ‘Caring for Orphans within the Islamic State’.  In this video Daesh (also ISIS, IS, ISIL) shows a group of boys dressed in their camouflage uniform training combat exercises.

It is not the first time the terror group has used children in a video. Footage posted last month by Daesh supporters showed an 11-year-old boy kneeling down to kiss his father’s hand before blowing himself up in a truck laden with explosives, Daily Mail reports. 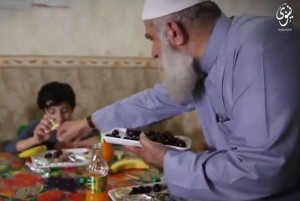 Also a four-year-old British boy dubbed as “Jihadi Junior”- who is the son of a Muslim convert Grace Khadija Dare from south east London- was filmed apparently detonating a bomb, which killed four prisoners in the group’s latest execution video.

A teenage boy has been beheaded by ISIS extremists because he missed Friday prayers.The 16-year-old was arrested in the Syrian city of Jarablus, in northern Aleppo, was executed within 24 hours of committing his so-called ‘crime’.

Witnesses described how he was hauled out into a packed public square and executed in front of a ‘huge crowd’ as a warning to others to not to miss prayers at the mosque.

His trial, at which he was accused of apostasy, is said to have lasted only a few minutes before the horrifying sentence was handed down in the city, which has been held by the extremists since 2013.

Activist Nasser Taljbini told ARA News:  ‘The teenage boy, who faced charges of apostasy, was beheaded in front of a huge crowd in central Jarablus on Saturday.’

One witness, who wished to remain anonymous, added: ‘Before carrying out the execution, a “Sharia” official read a statement issued by the “ISIS Sharia Court”, vowing everyone who misses prayers at the mosque to face a similar punishment.’

Friday prayers are held at a mosque each week, a time for the community to come together and worship.

The horrifying act comes just days after it was revealed ISIS militants had forced a 12-year-old girl to shoot dead five women in another so-called ‘execution’.

Horrifying act comes just days after it was revealed ISIS militants had forced a 12-year-old girl to shoot dead five women in another so-called ‘execution’.

A source said: ‘This evening, a 12-year-old girl belonging to the ISIS executed five women, including a doctor who refused to medicate ISIS members that were wounded in a coalition bombardment, by firing squad.

‘This execution is considered to be the first of its kind to be implemented by a small girl within ISIS.’