“No one man can terrorize a whole nation unless we are all his accomplices.” ~ (Edward R. Murrow) 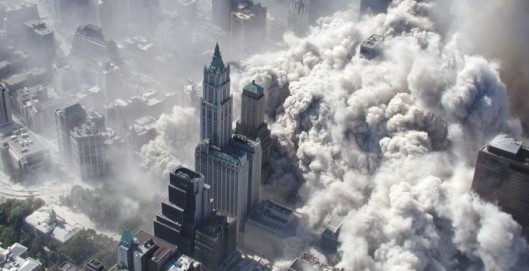 We’ve walked a strange and harrowing road since September 11, 2001, littered with the debris of our once-vaunted liberties.

We have gone from a nation that took great pride in being a model of a representative democracy to being a model of how to persuade the citizenry to march in lockstep with a police state. In doing so, we have proven Osama Bin Laden right. He warned that “freedom and human rights in America are doomed. The U.S. government will lead the American people in — and the West in general — into an unbearable hell and a choking life.”

These past 15 years have indeed been an unbearable, choking hell.

What began with the passage of the USA Patriot Act in October 2001 has snowballed into the eradication of every vital safeguard against government overreach, corruption and abuse.

The citizenry’s unquestioning acquiescence to anything the government wants to do in exchange for the phantom promise of safety and security has resulted in a society where the nation is being locked down into a militarized, mechanized, hypersensitive, legalistic, self-righteous, goose-stepping antithesis of every principle upon which this nation was founded.

This is not freedom. This is a jail cell.

Set against a backdrop of government surveillance, militarized police, SWAT team raids, asset forfeiture, eminent domain, overcriminalization, armed surveillance drones, whole body scanners, stop and frisk searches, roving VIPR raids and the like—all of which have been sanctioned by Congress, the White House and the courts—our constitutional freedoms have been steadily chipped away at, undermined, eroded, whittled down, and generally discarded.

Our losses are mounting with every passing day.

Free speech, the right to protest, the right to challenge government wrongdoing, due process, a presumption of innocence, the right to self-defense, accountability and transparency in government, privacy, press, sovereignty, assembly, bodily integrity, representative government: all of these and more have become casualties in the government’s war on the American people, a war that has grown more pronounced since 9/11.

Since the towers fell on 9/11, the American people have been treated like enemy combatants, to be spied on, tracked, scanned, frisked, searched, subjected to all manner of intrusions, intimidated, invaded, raided, manhandled, censored, silenced, shot at, locked up, and denied due process.

In allowing ourselves to be distracted by terror drills, foreign wars, color-coded warnings, underwear bombers and other carefully constructed exercises in propaganda, sleight of hand, and obfuscation, we failed to recognize that the true enemy to freedom was lurking among us all the while.

The U.S. government now poses a greater threat to our freedoms than any terrorist, extremist or foreign entity ever could.

While nearly 3,000 people died in the 9/11 attacks, the U.S. government and its agents have easily killed at least ten times that number of civilians in the U.S. and abroad since 9/11 through its police shootings, SWAT team raids, drone strikes and profit-driven efforts to police the globe, sell weapons to foreign nations, and foment civil unrest in order to keep the military industrial complex gainfully employed. (Syria’s bloody civil war in which CIA-armed militias have been fighting FBI-armed militias is a prime example of the government’s Machiavellian schemes gone awry.)

No, the U.S. government is not the citizenry’s friend, nor is it our protector, and life in the United States of America post-9/11 is no picnic.

Here’s an A-to-Z primer to spell out exactly what government tyranny means post 9/11.

As I make clear in my book Battlefield America: The War on the American People, the reality we must come to terms with is that in the post-9/11 America we live in today, the government does whatever it wants, freedom be damned.

The choices before us are straight-forward.

We can live in the past, dwell on what freedoms we used to enjoy and shrug helplessly at the destruction of our liberties.

We can immerse ourselves in the present, allowing ourselves to be utterly distracted by the glut of entertainment news and ever-changing headlines so that we fail to pay attention to or do anything about the government’s ongoing power-grabs.

We can hang our hopes on the future, believing against all odds that someone or something—whether it be a politician, a movement, or a religious savior—will save us from inevitable ruin.

Or we can start right away by instituting changes at the local level, holding our government officials accountable to the rule of law, and resurrecting the Constitution, recognizing that if we fail to do so and instead follow our current trajectory, the picture of the future will be closer to what George Orwell likened to “a boot stamping on a human face—forever.”

John W. Whitehead is the president of The Rutherford Institute and author of Battlefield America: The War on the American People.