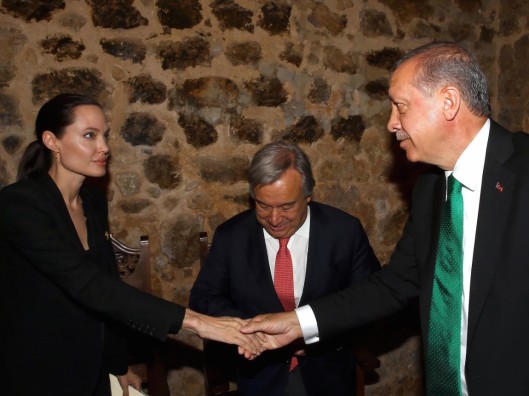 ~ “UNHCR Special Envoy Angelina Jolie Pitt has been commemorating World Refugee Day with Syrian refugees in Turkey, which has overtaken Pakistan to become the world’s largest refugee-hosting nation with more than 1.77 million in urban areas and government-run camps.

The Special Envoy and UN High Commissioner for Refugees António Guterres also met Turkey’s President Recep Tayyip Erdoğan to thank him and his people for the country’s generosity towards Syrian and Iraqis refugees and to discuss the challenges that Turkey and other host nations face, and their need for support. […]

Later, while visiting the Midyat Refugee Camp in Mardin, south-eastern Turkey, she made a powerful World Refugee Day call for more action to prevent conflict and support refugees. Her statement follows:”

“We are here for a simple reason: This region is at the epicentre of a global crisis. Nearly 60 million people are displaced from their homes. […]  The greatest single source of these massive refugee flows is Syria. In the space of four years, Turkey has become the country with the largest number of refugees anywhere in the world, with 1.8 million displaced Syrian and Iraqis. Lebanon, where I was yesterday, is hosting an even greater density of displaced people: every fourth person in Lebanon is now a Syrian refugee. People are running out of places to run to. If you are an Iraqi or a Syrian fleeing violence, where do you go? Every border country is being pushed beyond its limits.  […]

There is an explosion of human suffering and displacement on a level that has never been seen before, and it cannot be manage by aid relief, it must be managed by diplomacy and law. This is a central problem. We cannot pick and choose which human rights violations we will and won’t tolerate.

We have the tools we need – the resolutions, the doctrines, the conventions, the courts. But if these tools are misused, inconsistently applied or applied in a self-serving way, we will continue on this trend of displacement and it will grow and grow. It is inhumane to expect all of these families to tolerate this kind of life. We all know what needs to be done, we must do better. And it is self-evident that we have to start with Syria.

I call, again, on the United Nations Security Council: Send your ministers and ambassadors here. Witness this crisis for yourself. See that it simply cannot go on. And that it is past time for a credible plan to reach a political solution to end the conflict. I thank the people of Turkey, Iraq, Lebanon and Jordan for their generosity, and all host countries. […] “ 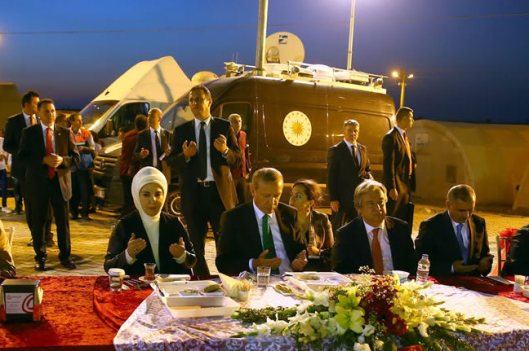 “We never have and never will leave the oppressed in the hands of the oppressor.”
[Turkey’s President Recep Tayyip Erdogan, Syrian “refugee” camp in Midyat, Turkey, 20 June 2015] 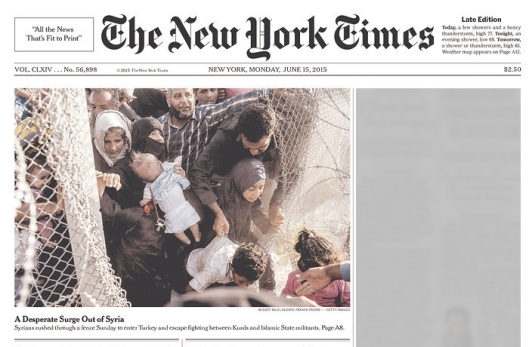 “Cem Ertür’s account of the crimes committed by Turkey and NATO in the ongoing war against Syria is laid out in meticulous detail and supported by a rich and credible bibliography. Much of this important information is from his reading of original reports published in the Turkish language which English readers would never otherwise hear. This report provides a convincing, up-to-date indictment of the governments of Turkey, other NATO countries and Israel for their savage, furtive war against the Syrian people and government. Cem’s spotlight illuminates a cross-border stage, exposing those hiding in the shadows of the media’s deceptive and confusing language”.
Les Blough, Editor of Axis of Logic 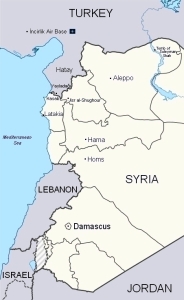 Turkey’s final warning to Syria: Tomorrow may be too late for reforms

Angelina Jolie, the Hollywood celebrity and goodwill ambassador for the U.N. High Commissioner for Refugees waves as she exits a van surrounded by Syrian refugees at the Altinozu refugee camp near the Syrian border, Friday, June 17, 2011. (AP Photo/Selcan Hacaoglu)