Here is an excerpt of a ‘lesson‘ of spirituality, civilization and humanity, imparted by a sheikh who passes himself off as a ‘scholar of Islam‘, but which in reality is a sadist frustrated and mentally unbalanced, as unfortunately all the ignorant barbarians that are part of Daesh (also improperly known as ISIS-ISIL), a herd of animals that associate them with monkeys, rats or donkeys is to do an injustice to those poor innocent animals.

We apologize to all our Muslim friends mentally healthy, that certainly can not accept this interpretation and imposition of such barbaric practices in the name of God, but the world has to know and choose which side to take:
~ or accomplice to the most cruel barbarity and madness,
~ or in a union of mutual co-existence with the entire human civilization
(SFP team) 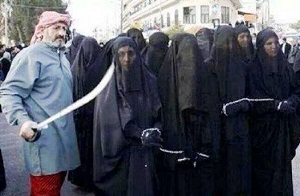 Q ~ Could you please clarify for me something that has been troubling me for a while. This concerns the right of a man to have sexual relations with slave girls. Is this so? If it is then is the man allowed to have relations with her as well his wife/wives. Also, is it true that a man can have sexual relations with any number of slave girls and with their own wife/wives also? I have read that Hazrat Ali had 17 slave girls and Hazrat Umar also had many. Surely if a man were allowed this freedom then this could lead to neglecting the wife’s needs. Could you also tell clarify wether the wife has got any say in this matter. 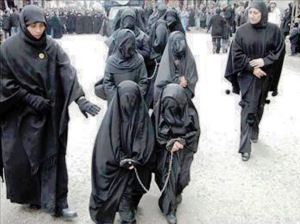 A ~ Praise be to Allaah.

Islam allows a man to have intercourse with his slave woman, whether he has a wife or wives or he is not married.

A slave woman with whom a man has intercourse is known as a sariyyah (concubine) from the word sirr, which means marriage.

This is indicated by the Qur’aan and Sunnah, and this was done by the Prophets. Ibraaheem (peace be upon him) took Haajar as a concubine and she bore him Ismaa’eel (may peace be upon them all).

Our Prophet (peace and blessings of Allaah be upon him) also did that, as did the Sahaabah, the righteous and the scholars. The scholars are unanimously agreed on that and it is not permissible for anyone to regard it as haraam or to forbid it. Whoever regards that as haraam is a sinner who is going against the consensus of the scholars.

Allaah says (interpretation of the meaning):

[al-Nisa’ 4:3]
What is meant by “or (slaves) that your right hands possess” is slave women whom you own.

And Allaah says (interpretation of the meaning):

Except from their wives or the (women slaves) whom their right hands possess for (then) they are not blameworthy.

But whosoever seeks beyond that, then it is those who are trespassers”
[al-Ma’aarij 70:29-31]

Allaah says, “And those who guard their chastity” i.e., protect their private parts from doing everything that Allaah has forbidden, but they are not to blame if they do not guard their chastity from their wives or from the female slaves whom their rights hands possess.

Taking a concubine as well as a wife is permissible according to the law of Ibraaheem (peace be upon him). Ibraaheem did that with Haajar, when he took her as a concubine when he was married to Saarah.

The phrase “and those (slaves) whom your right hand possesses — whom Allaah has given to you” [al-Ahzaab 33:50] means, it is permissible for you take concubines from among those whom you seized as war booty. He took possession of Safiyyah and Juwayriyah and he freed them and married them; he took possession of Rayhaanah bint Sham’oon al-Nadariyyah and Maariyah al-Qibtiyyah, the mother of his son Ibraaheem (peace be upon them both), and they were among his concubines, may Allaah be pleased with them both.

The scholars are unanimously agreed that it is permissible.

There is no dispute (among the scholars) that it is permissible to take concubines and to have intercourse with one’s slave woman, because Allaah says (interpretation of the meaning):

Except from their wives or the (women slaves) whom their right hands possess for (then) they are not blameworthy.”

Al-Shaafa’i (may Allaah have mercy on him) said:

Allaah says (interpretation of the meaning):

Except from their wives or the (women slaves) whom their right hands possess for (then) they are not blameworthy.”

The Book of Allaah indicates that the sexual relationships that are permitted are only of two types, either marriage or those (women slaves) whom one’s right hand possesses.

The wife has no right to object to her husband owning female slaves or to his having intercourse with them.