By David Macilwain AMRIS   ~   Posted by Sheila Newman for CanDoBetter

AMRIS deplores, however, the decision by the Australian Government to follow the lead of the United States in taking military action against IS within the borders of Syria, one of the founding members of the United Nations, without the consent of the Syrian Government.

Mr Macilwain said, “Such action will do little to ‘degrade and destroy’ the terrorist group, whose control over territory has only continued to increase despite a year of US Coalition airstrikes. Furthermore there have been significant civilian casualties and damage as a result of those airstrikes, leading to further refugee flows.”

“While Australian involvement in the campaign in Syria will do little to change this situation, culpability for ‘collateral damage’ sustained within Syrian sovereign territory could bring us before the ICC,” added Mr Macilwain.

“Rather than looking for an alternative pretext that might be legal, such as the ‘responsibility to protect’ Iraqis, AMRIS proposes a clear alternative – cooperation with the Syrian Army in its fight against IS and other terrorist groups.” 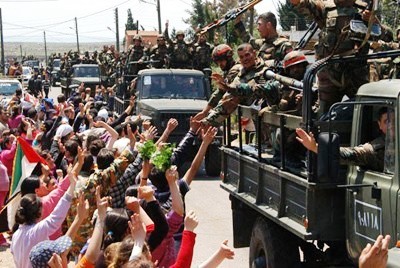 “AMRIS also considers that if the Australian government is genuine in its desire and commitment to defeat IS, Al Qaeda and allied terrorist groups in Syria, and seeks to restore peace and security such that refugees can return, then it must be prepared to work in cooperation with the Syrian government and security forces. Such a commitment also entails the recognition of that government as legally constituted and representing the majority of the Syrian population, as mandated in the election of June 2014.” [1]

Mr Macilwain further stated, “In the absence of such cooperation with the Syrian authorities, Australian military intervention in the Syrian conflict will be neither legal nor moral, regardless of the stated target and pretext. The consequences of such an illegal intervention, which under international law constitutes the ‘supreme crime’ of launching a war of aggression, would be both inconceivable and uncontrollable.”

“AMRIS demands that there must be a full disclosure of the objectives, conditions and limitations of this intervention, subject to a parliamentary debate and public scrutiny before this apparent decision to take us to war is finalised.”

[1]  At the Presidential election of 4 June 2014, 10,319,723 Syrians, or 88.7% of the 73.42% of eligible Syrian voters who voted, voted for President Bashar al-Assad in spite of the obstruction of expatriate voters by some countries, including Australia and France.

I don’t know of one of the leaders any one of the formal democracies opposed to Syria – the United States, Great Britain, Canada, France, Turkey, Israel, Australia, … let alone the dictatorships of Saudi Arabia and Qatar – who can claim to have even close to President al-Assad’s popular endoresement.

At the conference not one of the ‘reporters’ who, before and since, have peddled the narrative that Bashar al-Assad is a corrupt, brutal dictator, attempted to challenge their testimony.