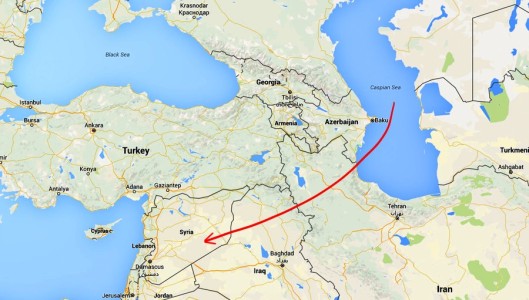 Four Russian Navy warships have fired a total of 26 missiles at the position of the terrorist group Islamic State in Syria, Russia’s Defense Minister Sergey Shoigu announced. The missiles were fired from the Caspian Sea.

The missiles flew some 1,500 km before reaching their targets, probing their efficiency.

The missile attacks came from Russia’s fleet in the Caspian Sea, which borders Russia, Iran and three other littoral countries. The precision weapons hit all intended targets. The attacks apparently required cooperation from Iran and Iraq, as the missiles had to travel through their airspace to reach Syria.

Earlier, Russian warships played a key part in deploying the Russian warplanes to Syria, delivering equipment and supplies to an air base near Latakia and the Navy’s old base in Tartus.

Russia has spent a week delivering airstrikes at terrorist forces in Syria, conducting over 120 combat sorties. Now the Navy is joining Russia’s Air Force in the operation.

Russian jets hit 12 Islamic State targets in the course of nearly 20 combat flights carried out in Syria on Tuesday, the Defense Ministry said. Command centers and training camps were destroyed in the attacks which threw the extremists into panic.

The Russian jets destroyed an Islamic State army munitions plant outside Damascus as well as two command centers in Deir ez-Zor, according to the ministry’s statement. In the Idlib Governorate, a training camp for IS militants was eliminated, while several IS strongholds came under attack where ammunition depots were blown up.

Russia’s Su-34 fighters attacked an Islamic State stronghold near the Gmam settlement in Latakia, where “militants’ fortifications were completely destroyed,” according to Konashenkov, who also reported “numerous blazes caused by the detonation of ammunition and fuel supplies.”

Russia’s targeted airstrikes have caused “panic” among the militants, Konashenkov said, also stressing that the attacks are not conducted in residential areas or places containing landmarks.

Meanwhile, the Russian Defense Ministry does not rule out the possibility of Islamic State preparing provocative acts in Palmyra and other Syrian cities, such as bomb attacks on mosques, to put the blame for it on Russian aviation, Konashenkov said.

The ministry published a fresh video said to show extremists positioning their hardware near a mosque.

Hmeymim airbase has been used by the Russian Air Force since Moscow launched its anti-IS operation last Wednesday, following a request from Syria’s President Bashar Assad.

The Russian combat unit is comprised of over 50 aircraft and helicopters, as well as space surveillance equipment and drones.

Moscow began carrying out airstrikes supporting the Syrian army’s ground operations on September 30. On Tuesday, Russia offered to resume talks with the US to avoid any misunderstandings concerning its air operations. A US-led air campaign started in Syria a year ago.

The Russian Defense Ministry doesn’t rule out the possibility of Islamic State preparing provocative acts in Palmyra and other Syrian cities, such as bomb attacks on mosques, to put the blame on the Russian air operations, Konashenkov said.

Russia began carrying out airstrikes supporting the Syrian army’s ground operations on September 30. On Tuesday, Moscow offered to resume talks with the US to avoid any misunderstandings concerning its airstrike operations. A US-led air campaign started in Syria a year ago.

‘FSA won’t join Assad forces in fight against ISIS, that’s not US plan’

Our network (Syrianfreepress.net, WarPress.info, TG24Siria, HoyLandFree.org) and all related and associated pages on social networks, youtube, twitter, facebook…, are fighting against the media-terrorist-supporters and their fakes on Libya and Syria from 2011…and about Palestine from 2005…