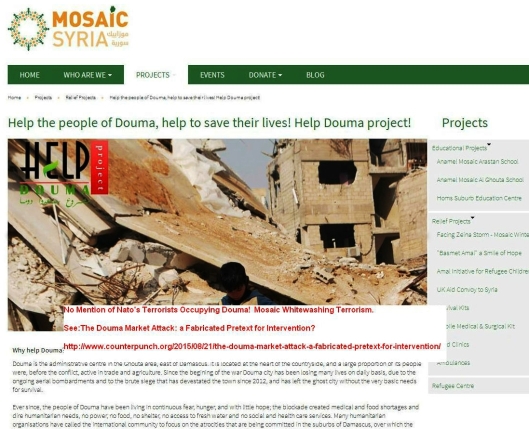 In recent months, the propaganda of the UK/US-backed White Helmets has been revealed again and again; their credibility has long been shattered. Yet, unsurprisingly, the HR industry continues to endorse WH’s staged propaganda.

In Nov 2014, the WH alliance created an animation video to further try to put forth the fairytale that they are “civilians” assisting “civilians” being bombed by the “regime”. The sheer, slick but obvious propaganda elements of the video aside, who are some of the key people involved in this propaganda piece?

Who and where is Amjad Wardeh?
According to his profile, he is a Syrian “is currently practicing art in Istanbul.” According to a June 2014 article on Wardeh, he has lived in Instabul since early 2013.

Interestingly, Wardeh has made prior propaganda videos, one of which, a 2 minute animation (‘War on famous canvas’) for which he was (translated from French), “one of three winners of the competition “Made in Med,” organized by Euromed Audiovisual, an EU program.”

An EU program. Of course, the EU has no interest in destabilizing Syria, right?!

Wardeh also participated in a 2013 London exhibition, “#withoutwords: emerging Syrian artists at the P21 Gallery,” which is described as “a collaboration between P21 and the charity Mosaic Syria”.

Mosaic Syria is yet another propaganda front, sloganeering against Syria. While its “Who We Are: Our Story” section describes the group as having “no political or ideological agendas…solely focused on humanitarian work of a charitable and unconditional nature” various posts and campaigns betray this lie. They use terminology like “brutal attacks of the regime,” “civil war”, and focus solely on baseless allegations against the Syrian government, with little to no mention of the documented crimes and murders of the never-“moderate” “rebel”-terrorists in Syria.

Their blog posts seem to have started in October, 2014, the first of which is a series of slick infographics designed both at fundraising and promoting the NATO narrative against Syria. Their section aptly categorized as “stories” contains further vague accounts with little details but much innuendo against the Syrian government, for example “the Story of Saba“.

Some of Mosaic Syria’s projects are based in terrorist-held areas of Syria, for example their al-Ghouta project, their Douma project, their field clinics in Turkey (whose border areas are known to be a conduit for terrorists into Syria, as well as training bases for NATO’s death-squads). Given Turkey’s role in funneling terrorists and arms into Syria, it would be more than interesting to see just who Mosaic Syria is treating in their Turkish field clinics. Are they they only treating Syrian refugees? Are they, as israel does, treating terorists who are fighting in Syria?

An Aug 2015 Mosaic blog post both promotes the myth of the “Civil Defense” (WH) and also negates the presence of terrorist factions in Douma (on Douma, see Eric Draitser’s “The Douma Market Attack: a Fabricated Pretext for Intervention?“). Other blog posts further the “regime” is killing civilians narrative, the “refugee crisis” (with no mention of the fact that most refugees are IDPs being housed in Syrian government secured areas, like Latakia, Tartous, Damascus, Sweida. As noted earlier: “Re-visiting Syria in July 2015, Professor Tim Anderson recounted that Latakia alone “has grown from 1.3 million to around 3 million people – they come from all parts, not just Aleppo, also Hama, Deir eZorr, and other areas.” He also visited Sweida, a mainly Druze region, which has accommodated “135,000 families, mainly from Daraa – others from other parts”. Mainly Sunni families.”).

Mosaic Syria hasn’t been on my radar; but after looking into them, and their support for (if not ties with) the White Helmets, they are now, and will be included in the list of “Human Rights” front groups (“Humanitarian Interventionalists”) warring on Syria”.

As for the White Helmets, their history has been amply investigated, as early as at least September 2014, when in her “SYRIA: Avaaz, Purpose & the Art of Selling Hate for Empire” investigative journalist Cory Morningstar wrote:

Morningstar’s article is essential reading for those who wish to understand not only the role of the WH, but also the key HR players in the theatre of manufacturing anti-Syria propaganda. For example, she also looked at Purpose Inc, parent of the WH, and related Avaaz, online petition propgandists for Imperialism.

Avaaz was created in part by MoveOn, a Democratic Party associated Political Action Committee (or PAC), formed in response to the impeachment of President Clinton. Avaaz and MoveOn are funded in part by convicted inside-trader and billionaire hedge fund mogul, George Soros.

Avaaz co-founder James Slezak is also identified as a co-founder and CEO of Purpose at its inception in 2009.

The secret behind the success of both Avaaz and Purpose is their reliance upon and expertise in behavioural change.

While the behavioural change tactics used by Avaaz are on public display, double-breasted, for-profit Purpose, with its non-profit arm, sells their expertise behind the scenes to further the interest of hegemony and capital. Whether it be a glossy campaign to help facilitate yet another illegal “humanitarian intervention” led by aggressive U.S. militarism (an oxymoron if there ever was one), or the creation of a new global “green” economy, Purpose is the consulting firm that the wolves of Wall Street and oligarchs alike depend upon to make it happen.”

The behavioural change tactics Morningstar refers to are an important element of WH propaganda photos and videos. But back to WH’ parent, Purpose Inc:

“Purpose Inc. (with its co-founders) is a favourite of high-finance websites such as The Economist and Forbes and sells its consulting services and branding/marketing campaigns to Google, Audi, the American Civil Liberties Union (ACLU), The Bill and Melinda Gates Foundation and many others that comprise the world’s most powerful corporations and institutions. In 2012, it raised $3m from investors. “Ford Foundation, which has given Purpose’s non-profit arm a grant, reckons it is shaping up to be “one of the blue-chip social organisations of the future.” [Source] Purpose, like many other foundations, such as Rockefeller (who initially incubated 1Sky which merged with 350.org in 2011), also serves as an “incubator of social movements.” [Further reading on Purpose]”

…Purpose’s March campaign #withSyria website (which doubles as a hash tag for Twitter) partners include: Open Society Foundation (George Soros), Amnesty International, Christian Aid, Care, Friends of the Earth, Oxfam and many more of the largest “humanitarian” NGOs within the non-profit industrial complex which makes up a billion dollar industry. [Full list of partners: http://marchcampaign.withsyria.com/partners0].”

In her report, she notes other players created by these same propagandists, including “The Syria Campaign” (created by Purpose, launched March 7, 2014), which indeed is active on social media in promoting the war agenda by sharing staged propaganda photos.

As she noted, the real purpose of Purpose Inc (and co) is not humanitarian.

“The lapdog media have not turned away, but much of the public has. It’s the job of Purpose to employ netwar methods (“a form of low intensity conflict, crime, and activism waged by actors using social networking services” according to Wikipedia) on the public (targeting Euro-Americans) that will instill hatred toward the democratically elected Bashar al-Assad.”

In his April 2015 investigation, “Chemical Fabrications: East Ghouta and Syria’s Missing Children, Professor Tim Anderson noted how the WH and allied campaigns were cheerleading for a No Fly Zone on Syria:

“Anti-Syrian ‘activists’, plus US-based NGOs such as Avaaz, the Syria Campaign and The White Helmets, also repeated and extended their accusations, while urging a Libyan styled ‘no fly zone’ (NFZ Syria 2015; White Helmets 2015), clearly intended to topple the Government in Damascus.”

The Syria Campaign is managed by Anna Nolan, who grew up in northern Ireland and has very likely never been to Syria. In addition to promoting the White Helmets, Syria Campaign promotes a new social media campaign called “Planet Syria”. It features emotional pleas for the world to take notice of Syria in another thinly veiled effort pushing for foreign intervention and war.

According to their website, The Syria Campaign received start-up funding from the foundation of Ayman Asfari, a billionaire who made his money in the oil and gas services industry.”

In his section addressing the White Helmets, he noted:

“Civilians from rebel controlled territory were paid to go to Turkey to receive some training in rescue operations. The program was managed by James Le Mesurier, a former British soldier and private contractor whose company is based in Dubai.

The trainees are said to be ‘nonpartisan’ but only work in rebel-controlled areas of Idlib (now controlled by Nusra/Al Queda) and Aleppo.”

In her September 2015 blog post, Vanessa Beeley began what would be a series of posts on the WH and their accomplices.

“Even when a report is written about an ISIS atrocity, we often will see Khaled Khatib’s photograph accompanying that report. I will give you an example. In March 2014, the Daily Star [Lebanon] reported on horrific mass executions carried out by ISIS throughout Syria, including Aleppo. ISIL jihadists conduct ‘mass executions’ in Syria: UN probe. Despite this article describing the hideous killings and torture of civilians by ISIS, the caption on the accompanying photo by KK reads ” The bodies of two children lie in the rubble of a residential building targeted by [yes you guessed it] barrel bombs launched by “regime” forces.

My marketing background alerts me to this insidious form of subliminal “advertising” that will ensure that the public psyche absorbs the message of “regime” atrocities in preference to the information regarding ISIS depravity. A brief check on other mainstream media reports demonstrates that this is not an isolated case….”

The propaganda war against Syria is replete with Imperialist front groups. However, their allegations and falsifications are becoming more transparent with every new lie and staged photograph.

Eva Bartlett is a Canadian freelance journalist and activist who has lived in and written from the Gaza Strip, Syria, and Lebanon. Follow her work on her blog ingaza.wordpress.com. 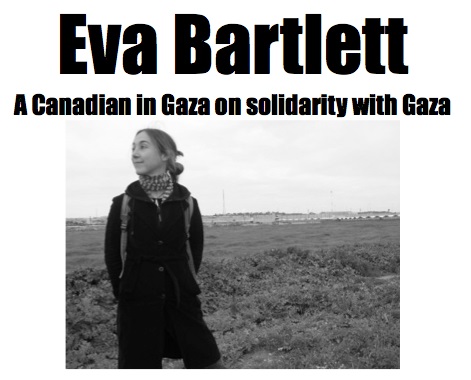 3 thoughts on ““MOSAIC SYRIA”: Another Actor in the Anti-Syria War Propaganda Theatre”