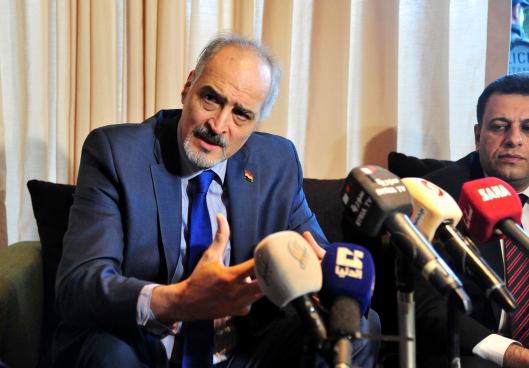 “There are several [opposition] groups that are present and support having the dialogue continue. However, those who want to walk away upon instructions they receive from the outside will have to take responsibility for their actions,” said al-Jaafari in an interview with several Syrian media outlets in Geneva, stressing that the Republic’s delegation is ready to go all the way with the dialogue.

He affirmed that the Republic’s delegation has shown the highest level of discipline and commitment among all the groups participating in the intra-Syrian dialogue.

Al-Jaafari criticized the fact that the United Nations, represented by its Special Envoy for Syria Staffan de Mistura, has not treated all factions of the Syrian opposition on an equal footing, citing this as one of the problematic structure-related issues spotted since the first round of the talks.

He cited other problematic issues related to the representation and nature of the opposition delegations and the absence of a schedule by de Mistura, who, al-Jaafari said, likes to take up the UN Security Council resolution no. 2254 as a schedule, “which we say can only be taken as a road map and not a schedule.”

Al-Jaffari stressed that the Republic’s delegation’s reading of the resolution no. 2254 says that “our mandate here in Geneva stops at reaching the point of forming an expanded national unity government,” ruling out any discussion of the constitution, which he said would be “substantially in contradiction with the resolution itself.”

Discussion of the constitution at the talks, he elaborated, would mean undermining the right of the possible “temporary government or the expanded national provisional government to assigning a constitutional committee to draft a new constitution or amend the existing one.”

He went on saying that the formation of an expanded national unity government will include representatives of the current government, the opposition, independent figures and others, meaning a government of technocrats.

This issue, he added, has been explained to de Mistura, “with whom we engaged into active dialogue,” noting that the Republic’s delegation is waiting for reactions from other delegations to the amendments it made to de Mistura’s “basic elements” paper presented at the end of the previous round of talks.

“Our amendments to de Mistura’s paper are now the core of discussion,” al-Jaafari clarified, noting that the UN envoy has promised to put forth the amendments to the other groups and come back with reactions that will be represented to the Republic’s delegation during Wednesday’s session of talks.

Al-Jaafari denied that de Mistura officially raised the issue of the “vice-presidents”, stressing that he explained to the UN envoy that any such discussion is not acceptable as it is out of his mandate.

Al-Jaafri reiterated that Syria is ready to form an expanded national unity government that would engage some groups of the opposition, “but not any groups.”

He made it clear that the opposition groups who want to be part of an expanded national government should not be linked to terrorism or follow foreign agendas and should be living in Syria, adding that the “Riyadh opposition” group is linked to Saudi Arabia, Turkey and Qatar.

Earlier in an interview with Reuters, al-Jaafari affirmed that talks in Geneva can be continued with other opposition powers although “al-Riyadh opposition” delegation has announced suspension of its participation.

“The opposition is not only restricted to the higher Commission for negotiations formed in Saudi Arabia, “al-Jaafari told Reuters , adding “If they wanted to boycott talks, they could do so, it is not a big problem for us because they are not the only representatives of the Syrian opposition.”

He went on to say that the pretexts marketed by al-Riyadh opposition are not convincing, saying that the other groups in the opposition don’t evaluate the situation in the same way, so talks will continue with all possible flexibility.

“Al-Riyadh opposition delegation stir problems since the beginning of the process in Geneva and threaten to suspend talks or postpone them as they wait for the orders from their supports in Saudi Arabia, Turkey and Qatar,” al-Jaafari said.

He added that this is a political procrastination as you name it by the language of the UN; they delay in order to “blow up the talks as a whole.”