We thank EvaGonzalesTheWriter (https://evagonzalesthewriter.wordpress.com/) for her kind reporting and correction (see comments).
SFP

(SouthFront 6/3/2018) ~ A pro-government media activist, Penelope Stafyla, has released a series of photos reportedly showing a media studio of the White Helmets, which produces “evidence of Assad regime war crimes” in the Eastern Ghouta region, near the Syrian capital of Damascus. 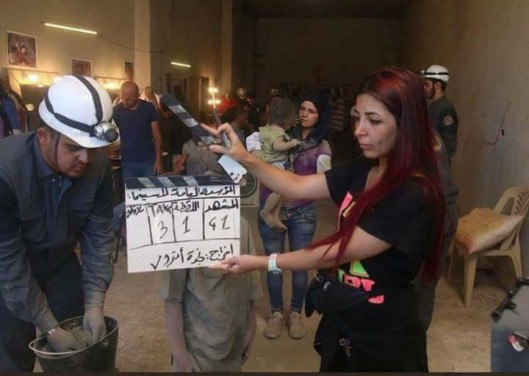 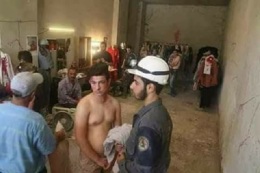 At least 30 people were treated for breathing difficulties after a regime chlorine gas attack in the Damascus suburb of Eastern Ghouta, according to a Syrian civil defense agency on Tuesday. Several children and women were among the victims of the attack in Hamuriye town on Monday, the White Helmets said in a statement. The civil defense agency said two of its rescue workers were among the casualties.

As the Grenfell tower fire began to die down, propaganda began ramping up in England. Channel 4, long known to support terrorist organizations and the war in Syria, aired a shockingly insulting video directed at London firefighters that scarcely anyone in the firefighting community or general public even noticed. The Channel 4 program aired what was supposed to be another round of tribute for London firefighters and their bravery at Grenfell, but what it actually showed was terrorist support group White Helmets “expressing solidarity” for the London firefighters and holding up banners expressing the same sentiment.

“With no regard for the ever-mounting evidence, exposing the White Helmets as Al Qaeda co-workers and enablers in Syria, Channel 4 once again promoted this group of NATO and Gulf state funded criminals, as heroes,” wrote Vanessa Beeley of 21st Century Wire.

“The genuine firefighters in London should be insulted that their own valiant efforts are compared or conflated with a fraudulent group of terrorists and petty criminals who campaign for war to ensure further bloodshed in Syria”……………………………………….

A member of the so-called White Helmets which has been hailed by the western media as ‘peace-bearing heroes’ has been caught on camera helping a group of unidentified militants disposing the bodies of beheaded Syrian Army soldiers.

Graphic footage posted on Twitter on June 20 shows a man wearing a T-shirt with the White Helmets logo dumping a pile of bodies, allegedly being that of Syrian Army soldiers or pro-government fighters.

The gut-wrenching footage shows that many bodies in the pile are beheaded and one militant even shows a severed head of a soldier up close on camera.

“Impartial and humanitarian White Helmets [are] participating in the beheading and throwing of Syrian soldiers bodies at a dumpster in Daraa,” a caption under the video posted on Twitter reads.

Daraa is a southern Syrian province bordering Jordan where several rebel factions as well as Al-Nusra terrorist group and its affiliates are operating……………….