Militants in Syria are using stimulant and synthetic drug sent by their foreign supporters as Syria war goes on with vicious images of brutality and inhuman crimes. 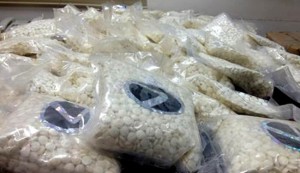 A large quantity of Captagon tablets are displayed at a police station in Beirut on Tuesday, August 13, 2013. (Source: The Daily Star)

According to reports, Syrian army has found different types of pills in militants’ strongholds on several occasions after their mop-up operations.

Captagon is one of the most common ones found in militants’ possessions.

On Saturday, Lebanese Police stopped an attempt to smuggle trailers filled with large amounts of Captagon pills into Syria.

Six trailers heading to Syria were seized by a patrol of the Internal Security Forces in the town of Saadnayel in Lebanon’s Bekaa Valley, the Daily Star reported.

Use of drugs, alcohol and doping substance has been allowed by leaders of extremist groups who are losing all kinds of limitations they traditionally hold, to keep their militants go on.

Abuse of fenethylline of the brand name Captagon is most common in Arab countries and counterfeit versions of the drug continue to be available despite its illegality.

Many of these counterfeit “Captagon” tablets actually contain other amphetamine derivatives that are easier to produce, but are pressed and stamped to look like Captagon pills. Some Captagon pills analyzed do contain fenethylline however, indicating that illicit production of this drug continues to take place.

The war in Syria started in March 2011, when pro-reform protests turned into a massive insurgency following the intervention of Western and regional states.

The unrest, which took in terrorist groups from across Europe, the Middle East and North Africa, has transpired as one of the bloodiest conflicts in recent history.