by Franklin Lamb, Al-Manar, also at The Rebel.org
Video & Article Submitted by ‘The Old Sniper‘ 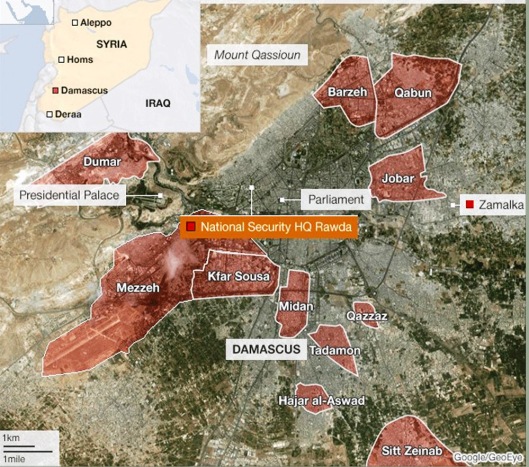 Changes are underway in Damascus’s suburban neighborhoods. In some of these neighborhoods there are few families’ left—only fighters. But in others, residents are trickling back in (or in some cases never even left) despite the danger. Here in these areas, those who have chosen the armed opposition route fall are grouped roughly in the following percentiles: 70% FSA, 25% Al Nursa, and, as of now, relatively few, Da’ish (IS).

During meetings with young men from the Barzeh neighborhood, an area maybe five blocks by eight blocks, this observer learned of approximately 700 FSA fighters in the neighborhood, 110 from al Nursa, compared with only 7 or 8 Da’ish fighters. The latter do not appear very active in community matters, but reportedly keep their eyes peeled watching what the other militia are up to. Even so, Dai’sh still recruits and sends applicants to other locations for military training, this while promising that within two months the Islamic State will attack central Damascus.

At the same time, desertions among the rebels are reportedly on the upswing in these areas, and some of the FSA and al-Nusra fighters are splitting off to join Da’ish. It seems that some of these young militia members—pretty much like youngsters everywhere—simply want to play for a ‘winning team’ or in the ‘big leagues,’ and Da’ish is still a strong magnet for ‘tryouts.’ Al-Nusra and Da’ish fighters both claim they are eager to fight Hezbollah—and Western forces—who they believe will show up sooner or later. And many of them exhibit an attitude similar to that of a European jihadist who recently remarked to this observer, “Let’s get it on. And the world will itself judge who are the best fighters, we who believe in Allah or the kuffers (disbelievers).”

Another disturbing attitude, all too frequently expressed in Damascene neighborhoods, is the desire of many of these young men, many of them from “good” families, to sacrifice themselves and become martyrs to their various causes. Residents report that some of the most promising students—majoring in subjects like medicine, law, engineering, computer science, business and other professions—are disaffected and see no future for themselves. And while many are deeply religious, a surprising number appear not to be.

Overwhelmingly the rebels come from areas where outsiders are few. This observer’s friend of more than three years, whose name I withhold for his security, has lived most of his life in Barzeh and knows many of the militia guys. He reports that currently there are only two foreign fighters in Barzeh, one from Algeria and the other from Saudi Arabia. And he expressed shock to me that a friend of his from childhood—who joined al-Nusra 18 months ago and had since become one of its local leaders—had suddenly disappeared. A few days later, my friend got a ‘what’s up’ message from Turkey and learned that his friend had shaved his beard, changed his style of clothing, and left Barzeh without telling anyone. Now he reports that he wears shorts and swims during the day on the Turkish coast and no longer has any desire to fight anyone.

Many among al Nusra and other rebel groups, it seems, are trying to leave Syria and go somewhere, anywhere, that might offer them a positive future of some sort—because they see the war in Syria as being a long one. And in this respect they are no different from the war-weary, exhausted, traumatized Syrian population in general. With very few jobs and nearly ten million displaced from their homes—and with some 3 million living as refugees in neighboring countries—what one finds here on the one hand is a growing desire to get out, to establish, sadly, a new life elsewhere, in a land other than the one they most love. Yet on the other, significant numbers of fairly hard-core al-Nusra fighters, as noted above, are quitting that militia in order to join the winning team—Da’ish. It is a combination of social factors pointing to what the Iranians have already made note of: that Obama’s strategy of trying to fight Da’ish and the Syrian government at the same time is probably doomed to failure.

Some Syrian analysts, whose views this observer credits, identify two trends that appear to be developing in Syrian neighborhoods controlled by violent militia. One is the growing resistance by the local population to being intimidated and abused by the occupying gunmen—while another is the role the Syrian government is playing in engaging in dialog, usually privately, with the rebels, and offering what some locals here refer to as “contracts.” These are proposals of ceasefires of varying scope in order to help give some hope and help to the increasingly besieged population.

Also, neighborhood attitudes toward militia in areas around Damascus are dramatically changing. This observer is advised by fighters from Barzeh that as recently as 12-18 months ago, maybe 80% of the citizens supported the FSA, while some backed al Nusra or other groups. Today militia support is estimated at less than 40%—and dwindling. Even those who still back the armed gangs are weaker in their support and no longer respect the militia or defer to them as before. Increasingly neighborhood residents are confronting the rebels on neighborhood streets via ‘citizen committees.’ They are showing up at rebel checkpoints or headquarters to complain or demand respect and an end to arbitrary street “justice.” Reasons for this include abhorrence of brutality, exhaustion, disillusionment, as well as demonstrable efforts by the Syrian government to increase and maintain services while trying to make important and long overdue changes. Even many rebels are said to credit the government for its willingness to be flexible and to make “contracts” with them to improve the lives of the besieged population.

For example, when families return to their homes after having fled, nearly all find that their flats have been broken into and personal property stolen, and they sometimes discover some of their stolen items being sold in neighborhood ‘jihadist souks.’ According to one resident of Barzeh, computers and plasma TV’s are among the most commonly stolen property. By contrast, “neighborhood watch” citizen groups seek the return of stolen goods and demand that the militias stop the thievery.

Also people are increasingly calling for a return to Syrian secularism, and they may actually be making some progress on this point. Unlike Da’ish, al Nursa does not insist that people attend a mosque for prayers—while the FSA is relatively secular. Nursa does require that women wear hijabs in neighborhoods under its control, and the first two times a woman is caught without one she is issued a warning. The third time she risks a public whipping. This observer is advised that many younger women, despite the risks, will remove their head scarves the moment they cross out of rebel-held areas, sometimes in plain view of those manning the checkpoints, leaving the neighborhood at this point, traveling to downtown Damascus for work or other purposes. It’s not dissimilar actually to what one finds among many Iranian women, particularly students at Tehran University, who openly admit, often with grins, to giving the local “morality police” a hard time when demands—for instance to adjust their headscarves so as to reduce the amount of hair visible—are made by roving “purists.”

As for the Free Syrian Army, now dubbed by some in the Obama Administration as the “National Coalition—kind of like the National Guard”—it is viewed by many here as corrupt, manned to a large extent by lowlifes and thieves. The “Free Syrian Army,” as one pithy adage has it, is neither free, nor Syrian, nor an army. And at least in Barzeh, at any rate, it is also viewed as being for sale to the highest bidder. Moreover, the residents here, though increasingly vocal about jihadist militias, seem to hold actually more respect for al-Nusra, despite its Islamist extremism, than for the Western-backed FSA.

Late word just received by this observer from his friend, the aforementioned son of Barzeh: yesterday he, too, snuck across the Syrian-Turkey border in search of a new life-somewhere until peace returns to his beloved Syria.

Syria – The Truth and the Solution in 61 Seconds

SOURCES: Al-Manar
Article by Franklin Lamb at The Rebel.org
Video & Article Submitted by ‘The Old Sniper‘
the real SyrianFreePress.NETwork reloaded
at  https://syrianfreepress.wordpress.com/?p=39355