I urge all who read this to spread this story far and wide via social media and blogs.

Send to your local politician, member of parliament, government official, or any another voices that are loud enough to do something about these

For over a year now, the United States has been sending fighters to fight (or support) Jihad in Syria via donations from Americans. More than likely, most of these donating have no clue they are supporting the slaughter of innocent Syrians. Under the guise of “Humanitarian Aid” money is collected that not only aids these terrorists to travel back and forth from the United States to Turkey (and into Syria), but it affords them lavish vacations, homes, motorcycles and more.

With the help of the Prospect Park New Jersey mayor (who appears to be a player in the Muslim Brotherhood operating out of the United States and in this proxy war on Syria), Mohamed T Khairullah, is collecting money through his charities to fund these operations. The mayor himself has traveled to Syria 4 times now on what he claims is “Charity” work.

As the people of the United States may be unfamiliar with many beliefs of the Saudi led “Wahhabi” mentality born and bred in Saudi Arabia and the average non-violent Muslim, it is easy for many to fall prey to their schemes. I would suggest to Americans they learn the difference. If you think this type of terrorism cannot happen in America, you are wrong. One thing many of these terrorist and terrorist supporters from the United States do is CLAIM they are from Syria, when in fact, they offer ZERO proof, but only a claim.

Along with the many Muslim Brotherhood supporters living in New Jersey, there is an area of the United States in Alexandria, Virginia known as “The Wahhabi Corridor” which supports the same ideology as the terrorists fighting against the Syrian Arab Army right now. As you can see, they WILL use violence.

Please click on any picture to ENLARGE for easier reading.

If you want to read more about this “Wahhabi Corridor,” please visit http://www.sperryfiles.com/corridor.shtml

What sparked my interest in doing this story was a photo I saw. I knew damn well only “Americans” would be behind a group of Jihadist terrorists attempting to form “Hearts for Valentines Day” while they slaughter innocent Syrians. 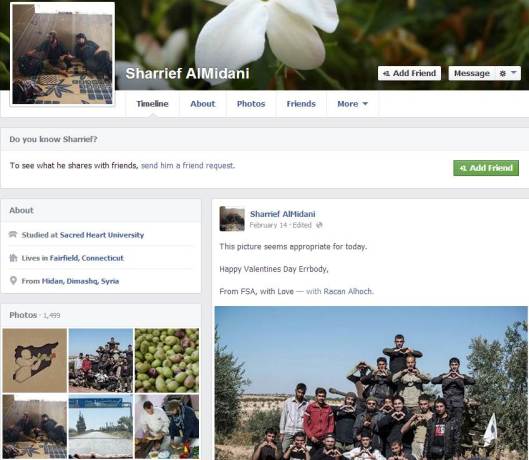 These pictures speak a 1000 words…

The Picture of the (old FSA Flag), along with the Black Flag of War, or Al-Qaeda Flag that the FSA has united under along with the USA created logo for the Free Syrian Army. 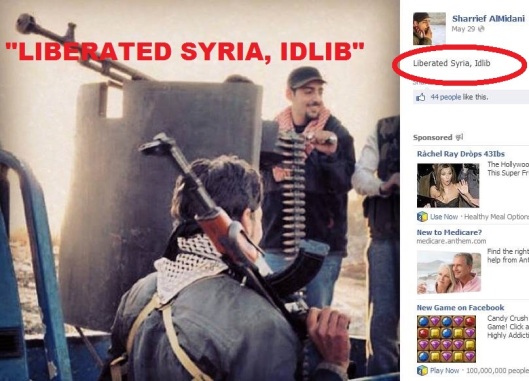 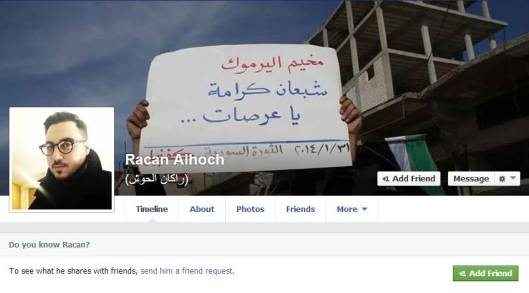 Racan Alhoch is a member of the Wayne Fire Department

Another American traveling to Syria with his terrorist friends is Kenan Rahmani. He studies Law at Notre Dame Law School in Norte Dame Indiana. 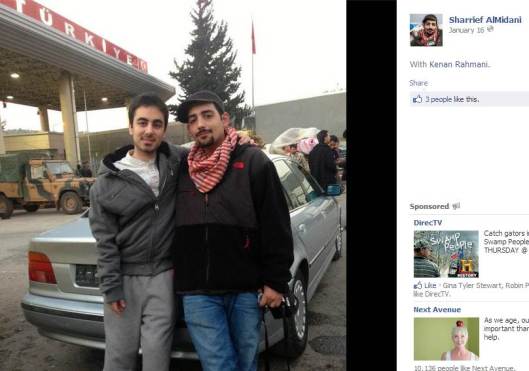 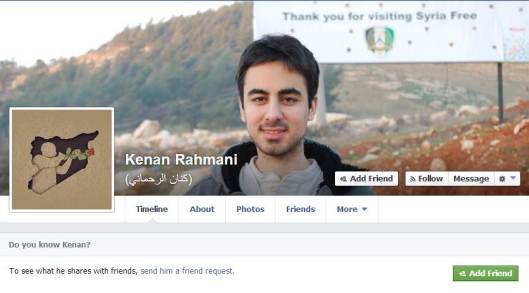 Sharing HIS interpretation on the events in Syria, from an illegal terrorists point of view anyway… 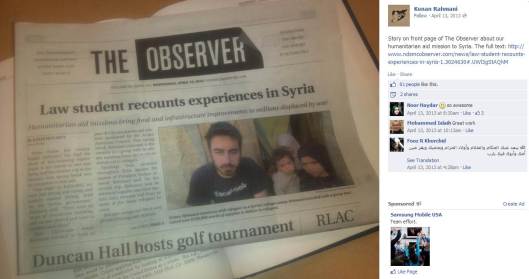 Meeting with South Africa’s Ambassador to the United States to “Discuss a better position with relation to the Syrian conflict.”

Another American traveling to Syria with his terrorist friends is Mulham Al-Jundi. He is married to Roula Abed. Both run the Wantan “Charity” from Turkey. 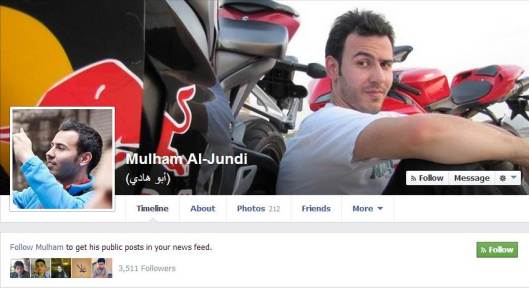 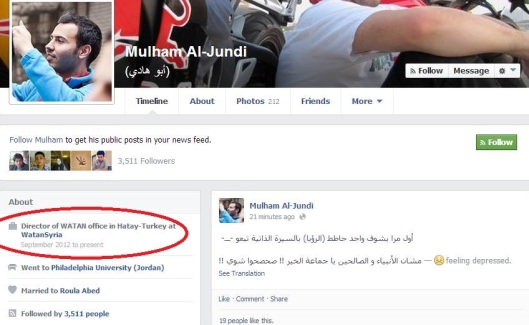 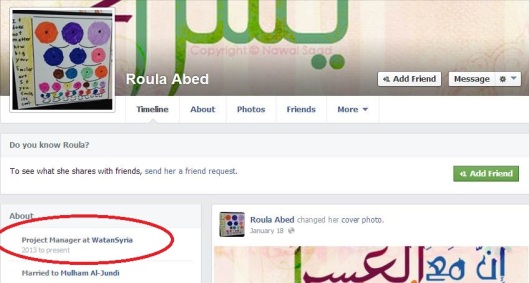 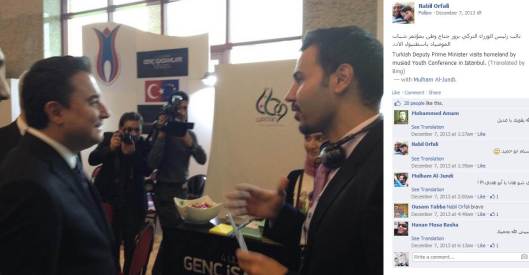 Another American terrorist who has traveled to Syria (after Iraq and Libya), is Matthew VanDyke. Friends with Sharrief AlMidani, he speaks of the American Syrian “activists” which is a phrase used in the United States Main Stream Media when speaking on Syria, but it is very clear what and who they are. “Activist” would NOT be the word I used to describe these Americans as they raise guns against a sovereign nation fighting terrorism. The same terrorists in fact, that the US CLAIMS to fight in other areas of the Middle East. Why is this war criminal NOT in prison?

SyrianGirlPartisan speaks about WAR CRIMINAL, and US citizen Matthew VanDyke.

Matthew VanDyke travels around the United States spreading HIS version of the situation in Syria. Do your homework. Matthew is a KNOWN liar. 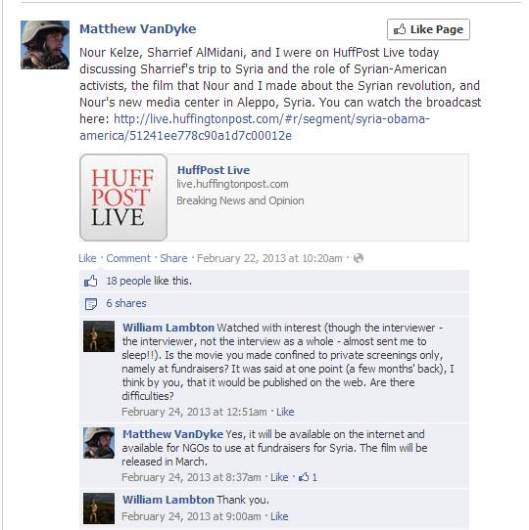 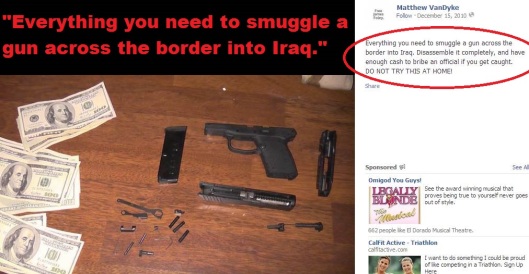 Another friend of Kenan Rahmani and Sharrief AlMidani (who I believe is a chief financier of these Americans traveling to Syria), is Prospect Park New Jersey Mayor Mohamed T Khairullah. (Raised in Saudi Arabia). 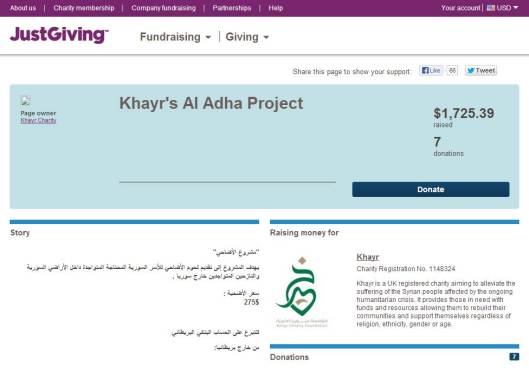 The mayor runs a few charities. One being Kayhr’s Al Adha Project and “Wantan.” 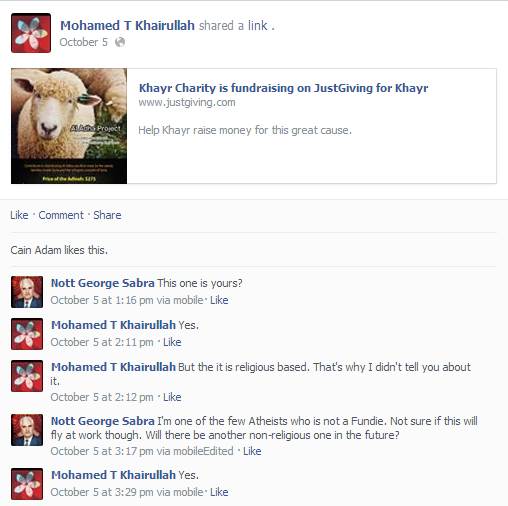 Notice the FSA terrorist scarf the mayor wears around his neck in the above photo. It bears the logo of another “charity” that sends its own version of “Humanitarian Aid” into Syria, also called armed mercenaries, or terrorists to those of us. Pictured below is the spokesman for John McCains favorites, “The al-Farok brigade.” 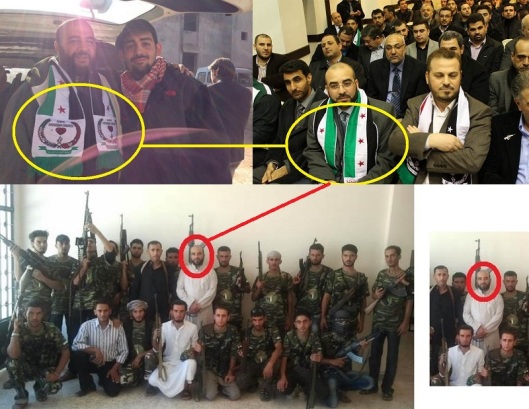 This random man (called a Syrian “man 2” as if random), seems to support an air strike on Syria, or at least the removal of Assad. The mayor pushed hard for the airstrike by America  through his Nation Coalition of Americans and everybody EXCEPT Syrians. He doesnt support ending terrorism because the Syrians are suffering, no… He is focused on the removal of Bashar al-Assad just as John Kerry and John McCain are.

“Fuck the Syrian people, or what the death toll rises to so long as Bashar is gone” seems to be the motto of the United States and its crooked cronies. Elections are this year in Syria. If ANY of these pieces of shit cared about the “Syrian people,” instead of what they can get from Syria if Bashar is removed, they would allow for the DEMOCRATIC election to take place and work to end the bloodshed. But they couldnt even work on that at Geneva 2. The US seems to be stuck like a broken record, one like we would all like to smash! This proxy war on Syria continues because these supporters of “Bashars removal” know damn good and well that in an election, the current president, Bashar will most likely win again hands down!

Just so happens, this random “man 2” and the mayor just happen to be friends. Coincidence? I think not.

This man was one of the terrorists who went into Christian churches, murdered innocent Christian civilians, destroyed the churches then helped burn them down. Im sure a friendship with this man is one of the highlights of the Muslim Brotherhood, Wahabbi supporting mayor.

Its not hard to see whom is connected to whom and so on and so on. Go to their facebook pages and look for yourselves before they are removed, again. The connections are endless. I am merely showing you the tip of this “American terrorism in Syria” ICEBERG!

“Anderson Cooper, its a sad day when your lack of professional journalism in reporting stoops so low as “ignorant bliss” regarding your sources.”

So, the next time you are considering donating to a charity for Syrians, remember… You are more than likely donating to forces who are actually killing innocent Syrians, and destroying Christian churches along with everything, and everyone else in Syria. Know that you are most likely supporting  Americans fighting for Jihad, and their lavish lifestyles, along with a few items to hand out to make it look good to the masses.

Some Charities associated with these Jihad fighters and supporters are…

So… while you Jihadists are fighting in Syria, and starving because your “Humanitarian Aid” has not arrived on time… Know the Jihadists sent by America, and paid for by Americans are having a FEAST FOR YOU!

I DEMAND an answer from the United States on why you are allowing this in Syria, a SOVEREIGN NATION!

Americans to ILLEGALLY fight in a war in another country? REALLY? REALLY?

I DEMAND an answer to how and why a governmental representative of the United States of America such as THIS mayor, has a job while he travels back and forth to Syria supporting the same people the US fights in other countries!

I dont know, Matthew VanDyke, maybe you can answer THAT one for me!

GOOD LUCK WITH THIS ONE MAYOR! YOU SHOULD BE IN THE INTERNATIONAL CRIMINAL COURT!

Notice what the mayor says about Syria’s Grand Mufti!

I REST MY CASE ON WHERE THE UNITED STATES FALSE REPORTING COMES FROM!