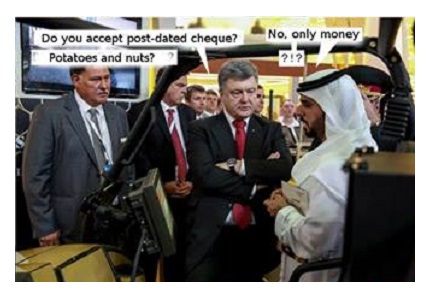 The announcement this week that the Kiev regime struck a major deal with the United Arab Emirates for military weapons raises strong suspicions that the US-led NATO alliance has found a new backdoor into Ukraine.

We say «new» because it is believed that the US and its NATO allies, Poland and Lithuania, are already covertly supplying weapons to the Kiev regime.

Kiev President Petro Poroshenko hailed the new strategic partnership with the Persian Gulf kingdom while attending the International Defence Exhibition (IDEX) in the UAE capital, Abu Dhabi. Poroshenko, who was royally received by UAE Crown Prince Mohammed bin Zayed al Nayhan, declared himself a «president of peace» but that Ukraine, or rather the rump state that his regime commands, needed strong defence because of its «Russian enemy».

A giveaway to the real significance of the surprise development is that Poroshenko and his Arab hosts also reportedly held discreet meetings with Pentagon officials and US weapons manufacturing executives during the weapons exhibition. That indicates that Washington is coordinating the expected arms transfers.

Although the Kiev-UAE partnership lacked any public detail, one can safely assume that the Arab supply of weapons to Ukraine is simply a conduit for American and NATO military support to the Western-backed junta, which seized power in Ukraine last year in an illegal coup. Its war of aggression on the separatist eastern Ukraine has inflicted at least 6,000 deaths, mainly among the ethnic Russian civilian population.

Earlier this month it soon became clear that Washington and its NATO allies would pay a heavy political price for an audacious move to openly increase their military involvement in the Ukraine conflict. When Washington announced that it intended to go ahead with Congressional provisions to send «lethal aid» to Kiev there was much international consternation over such a reckless move.

Moscow warned Washington that any further military support to the reactionary, anti-Russian Kiev regime on its western border would constitute a «disastrous escalation». US President Barack Obama then appeared to back off from the proposal to supply lethal munitions.

America’s normally servile European allies also baulked at the Washington arms move. Germany, France and even Britain indicated disproval by stating that they would not be following suite by sending arms to Ukraine. Germany’s Chancellor Angela Merkel was perhaps the most forthright in her reservations. While on an official visit to Washington she reiterated her «no weapons» position to US media while being received in the White House by Obama.

No doubt a disgruntled European public reeling from economic austerity, unemployment and seething contempt for unaccountable EU leaders had a concentrating effect on the various political capitals to not throw more fuel on an already raging Ukrainian fire. The idea of going along with incendiary American militarism in Ukraine and further antagonising Russia would provoke a political storm across Europe. Hence the usually trusty European «yes men» had to defy Washington’s recklessness.

That incipient divergence between the US and EU appeared to unnerve Washington, with the latter fearing that its anti-Russian axis and sanctions tactics might be unravelling. President Obama and his Secretary of State John Kerry were at pains to emphasise American-European «unity» over Ukraine and alleged «Russian aggression» – in spite of the fact that European leaders were, publicly at least, repudiating Washington’s weapons policy.

So, rather than risking an open split in the NATO ranks, Washington and its allies seem to have found an ingenious way around that problem – by getting the UAE to be the front end for weapons supplied to the Kiev regime.

Several media reports have talked up a «new defence industry» in the UAE. But whatever new industry there may be in the oil-rich kingdom, it is largely a value-adding or marketing platform for established Western manufacturers. The UAE defence sector is dominated by US military imports and American weapons giants, Boeing, Lockheed Martin and Raytheon. The Emirati «partner» operations are a way for the royal rulers to claim kudos for diversifying the kingdom away from its economic dependence on oil exports by seemingly creating hi-tech sectors. For the Western weapons firms, the Arab retail image can provide a convenient public relations cover for global arms-dealing. American and European weapons can thus be sold to parts of the world where it might otherwise be viewed as unethical – thanks to these sales being booked as originating from the UAE.

The fact remains, however, that the United Arab Emirates is the world’s fourth biggest arms importer, according to the Stockholm International Peace Research Institute (SIPRI). That is an astounding record considering that the UAE population is some nine million, with only one million of those being Arab nationals, and the rest being expatriate cheap-labour workers from Asia and Africa. Expressed on a per capita basis, the UAE is by far the world’s biggest weapons importer. And this is a country that has never been at war since its founding in 1971 after Britain granted formal independence.

In its latest global trends report, SIPRI notes that the Persian Gulf Arab states have doubled their imports of weapons in recent years, from an already high base. Saudi Arabia is now the fifth biggest importer globally. Qatar, Bahrain and Oman are also major sales destinations for the Western arms industry.

The Arab Gulf weapons market is dominated by the US, with some 40 per cent of all sales. Other major exporters to the region are Germany, France and Britain. Russia has also a strong presence in the market. But the lion’s share goes to US and its NATO allies. Germany in particular has stepped up its arms exports to the Persian Gulf, which has caused political problems among the German population for the Merkel government as it is being seen to prop up autocratic and repressive regimes. Leopard tanks and armoured personnel carriers are lucrative German exports.

The Persian Gulf arab regimes are thus in effect NATO arsenals. And the tiny UAE with its $13 billion military budget is a NATO arsenal par excellence.

The Kiev regime’s new contract with the UAE for military weapons supply is thus a front for NATO supplying weapons to Ukraine. Conveniently for Western governments, the arrangement tends to obscure a NATO link in the eyes of their public, but only superficially.

That bodes badly for the shaky ceasefire that Russia’s President Vladimir Putin helped broker earlier this month. Putin has already deprecated the continuing hostile attitude of Poroshenko and other Kiev leaders, who routinely accuse Russia of aggression and talk with bravado of fighting a «total war». Washington and the EU are indulging this inflammatory rhetoric with renewed sanctions on Moscow and laying the blame for the conflict on Russia.

While Western taxpayers bail out the Kiev regime with a $40 billion loan from the International Monetary Fund, the junta is evidently using the money to go on a weapons spree and to crank up its NATO-supplied war machine. The UAE weapons sales deal is just a backdoor for NATO to embark on further warmongering in Ukraine and toward Russia.