2 US senators introduce a bill to congress that aims to give Jerusalem to Israel, and allow Israeli citizens to move anywhere in Jerusalem. 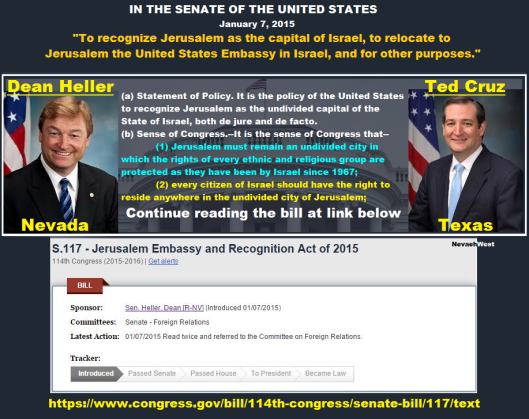 A new two-year term of the 114th congress started in the Unites States on Tuesday 6 January 2015, as Republicans take control of the House and the Senate. While everyone is paying attention to Russia and Ukraine or Iraq Syria and ISIS, a bill was introduced to this congress on 7 January 2015.

Both Senators were among those who signed an open letter to Irans leadership threatening them with reversal of any deals made by President Obama regarding the nuclear power they seek, reminding them President Obama would be out of office in January of 2017. Many in the government and the mainstream media now admit the letter was a “bad idea.”

The relationship of Israel to Palestine is a sensitive one, and one not taken lightly. Israel has felt with the backing of the United States, they could do anything. Netanyahu has admitted in video he can “bend America to do anything” even if its at the expense of Israelis and Palestinians.

On page many pages of this booklet, it clearly admits to Israel “occupied lands of Palestine.”

“The Question of Palestine and the United Nations” can be read here: http://unispal.un.org/pdfs/DPI2499.pdf

In an webcached article by National Geographic entitled “Jerusalem Facts” states the following:

Historic Recreation: Jesus on the way to his death.

♦ The West Bank is on the eastern side of the state of Israel. It received its name because it is on the west side of the Jordan River.

♦ It is believed that the Old City of Jerusalem has been inhabited continuously for almost 5,000 years.

♦ The Haram al-Sharif or Noble Sanctuary covers almost one-sixth of the area of the Old City. The platform that marks the boundary of the Sanctuary was originally built by Herod the Great to support the Jewish Temple.

♦ Muslims started building on the mount after the conquest of Jerusalem in 638. Some of the first structures built were the Aqsa Mosque in 639/40 and the Dome of the Rock in 691/2. With the exception of 88 years of rule by the Crusaders, the mount has been in Muslim hands for almost 1300 years.

♦ The Crusaders captured the City of Jerusalem in 1099. In 1187, the Muslim warrior Saladin retook the city from the Crusaders.

♦ In 1947, the UN proposed separate Jewish and Arab states with Jerusalem placed under international control.

♦ More than 3 billion people across the world – Christians, Muslims and Jews – believe that Abraham is the spiritual ancestor of their faiths.

♦ Scholars believe that the First Temple was destroyed in 586 BC by King Nebuchadnezzar and his army. In 70 AD, the Romans destroyed and burned the Second Jewish Temple.

♦ Emperor Constantine ordered a great church to be built around the site that was thought to be the Tomb of Christ. The Church was dedicated in 335 AD and a newer structure on the same site is now known as The Church of the Holy Sepulcher.

♦ The modern route of the Via Dolorosa (the Path of Sorrows) runs through the streets of the Old City of Jerusalem and ends in the Church of the Holy Sepulcher. The last 5 of 14 stations are inside the Church. Many Christians believe that this is the path that Jesus walked on the way to his crucifixion.

♦ According to tradition, Muslims prayed towards Jerusalem until 622, when the direction of prayer was changed to Mecca.

The page can be found here:
http://webcache.googleusercontent.com/search?q=cache:8gJ9mcYKqKgJ:channel.nationalgeographic.com/articles/jerusalem-facts/+&cd=3&hl=en&ct=clnk&gl=us