General Command of the Army and Armed Forces said that border guards in the Syrian Arab Army observed crowds of terrorist groups and two convoys of vehicles loaded with terrorists in two border areas with Turkey in parallel with cutting off power in the two areas.

The General Command said in statement: “Erdogan’s government continues to escalate tension on the Syrian-Turkish border.”

The General Command of the Army pointed out that on November 28th crowds of armed terrorist groups were monitored in the border area. In the morning of the next day, two convoys of vehicles loaded with terrorists were seen crossing the borders, adding that border guards in the Syrian Army had targeted them, forcing one of the convoys to return to the Turkish territory while the other escaped inside the Syrian lands. 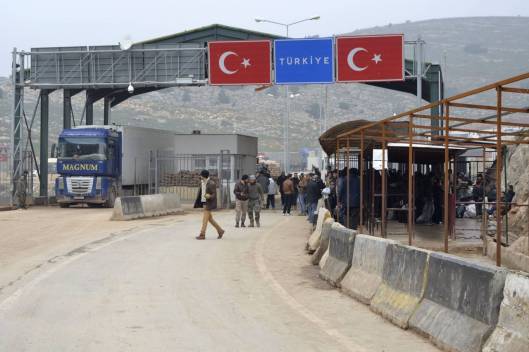 not welcome to Syria

The General Command added that those facts clarify the high coordination level between the terrorists’ leaders and the Turkish border authorities considering that these convoys began to move immediately after the cutting off power in the areas which showed that Erdogan’s government continues providing all kinds of support to terrorist organizations in Syria.

The General Command concluded the statement by saying that Erdogan’s government bears full responsibility for these dangerous violations, stressing the Army’s determination to do whatever it takes to prevent the entry of terrorists across the Turkish border.

Hama ~ Idleb Customs on Tuesday seized a lorry loaded with hand grenades and ammunition en route to Hama Province, according to a source at the customs.

The source said the lorry was carrying hand grenades and 7,250 rifle and machinegun bullets.

Aleppo ~ Army units destroyed a mortar and a heavy launcher, a heavy-equipped vehicle and an armored vehicle at the outskirts of Azizet Sama’an village in the western countryside of Aleppo province, a military source told SANA Tuesday.