“Hashd al-Shaabi is the only group that is resisting against the Zionist regime’s plots in Iraq,” an Iraqi intelligence source, speaking on condition of anonymity, told FNA on Sunday.

He reiterated that Mossad has recently taken measures against the international supporters of Hashd al-Shaabi because such support is against Israel’s interests as the Israeli officials have been criticizing Iraq’s volunteer forces.

The commanders of the Iraqi volunteer forces have always warned of Mossad’s plots against their country.

Alexander Prokhanov said that Mossad is also likely to have transferred some of its spying experiences to the ISIL leadership, adding that Israel’s military advisors could be assisting the Takfiri terrorists.

Prokhanov said ISIL is a byproduct of US policies in the Middle East.

“ISIL is a tool at the hands of the United States. They tell the Europeans that if we (the Americans) do not intervene, ISIL will cause you harm,” he said, adding that Iran and Russia are the prime targets of the ISIL.

“They launched their first terror attack against us just a few days back in Chechnya,” he said, stressing that the ISIL ideology has got nothing to do with the Islam practiced in Iran and some other Muslim countries in the Middle East region.

Prokhanov said the United States and Israel are one and the same when it comes to supporting a terror organization like the ISIL. 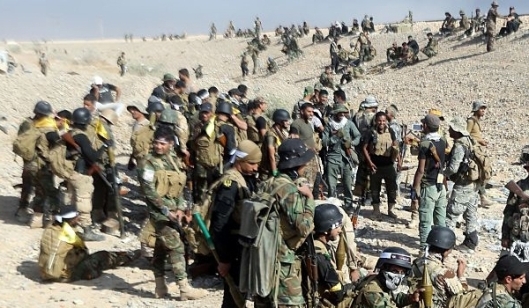 (FNA, 6 February 2016) ~ Iraqi security sources disclosed on Saturday that Washington is exerting pressure on the Baghdad government to end volunteer forces (Hashd al-Shaabi) partnership in war against ISIL and dissolve the militia army that has the lion share in the war on terrorism in the country.

“The US government has conveyed the message to the Iraqi government through its diplomats that there is no need to Hashd al-Shaabi forces and their role should come to an end,” a senior Iraqi source, speaking on condition of anonymity, told FNA on Saturday.

“Battlefield and security intel indicate that the Iraqi government is also stepping in this path,” the source added.

Meantime, the Iraqi volunteer forces have reacted to the leaked intel by warning against any regional and international attempts to put an end to their life and operation.

In relevant remarks in early November, a senior commander of the Iraqi volunteer forces underlined that the US is doing its best to weaken his country’s popular forces to block their further advances in key provinces.

“The US is exerting a lot of pressure to weaken the Iraqi volunteer forces and prevent them from advancing towards Salahuddin and Anbar provinces,” Hassan al-Sari told FNA.

He said that the Americans are trying hard to prevent the Iraqi volunteer forces from entering and capturing the city of Fallujah that is under the control of the ISIL now.

Al-Sari, however, reiterated that the Iraqi volunteer forces have maintained their readiness and will continue the fight against the ISIL until achieving all their goals.

The ISIL Takfiri terrorists currently control shrinking swathes of Syria and Iraq. They have threatened all communities, including Shiites, Sunnis, Kurds, Christians, Ezadi Kurds and others, as they continue their atrocities in Iraq.

Senior Iraqi officials have blamed Saudi Arabia, Qatar, and some Persian Gulf Arab states for the growing terrorism in their country.