Residents of the Eastern parts of Aleppo city took to the streets holding up pictures of Syrian President Bashar Assad and requesting militants to leave Aleppo immediately, media reports said.

FNA cannot verify or reject authenticity of the video independently.

According to reports on Thursday, militants that control the Eastern part of Aleppo are trying to suppress mass protests of local residents against their rule.

Meanwhile, Al Manar TV channel reported that dozens of people gathered in the Bustan al-Qasr district where one of the humanitarian corridors has been established by the army for civilians to leave the city.

Meantime, people are reportedly protesting at the militant groups’ exclusive access to the international humanitarian aid.

On Wednesday, local sources reported that civilians in the Eastern districts of Aleppo city took to the streets to protest at Jeish al-Fatah’s presence in their city, requesting the militants to leave Aleppo immediately.

“Unprecedented clashes between people and terrorists have pushed the Eastern neighborhoods of Aleppo city into a new wave of tensions,” sources said, adding, “People have taken part in demonstrations across the districts of Bostan al-Qasr and al-Kelaseh, calling on the terrorists to leave the city now.”

“People have also attacked terrorists’ food stuff warehouses, fighting with the militants for looting their food stuff from their neighborhoods,” the sources added.

The sources went on to say that terrorists have arrested a number of demonstrators, hitting them badly.

Civilians in militant-held districts of Aleppo are tired of terrorist groups’ measures, including suppression of people and banning food and medicine for the families who prevent their young sons from joining the terrorist groups.

The Arab media reported on Tuesday that people in militant-held neighborhoods were about to engage in street clashes with terrorists to save their lives.

The Arabic language al-Watan reported on Tuesday that the Syrian Army’s deadline for the exit of terrorists from Eastern districts of Aleppo ended, but no militant or civilian left the city via the humanitarian corridors, including Bostan al-Qasr and Costello.

In addition to preventing militants’ approach to the two specified corridors, the al-Qaeda-affiliated terrorist group al-Nusra Front (or Fatah al-Sham Front) threatened civilians with death if they approach the six humanitarian corridors that connect Eastern Aleppo to its Western part.

Reports from the city said terrorists blocked the exit of hundreds of residents in the Eastern districts of Aleppo, who had gathered near al-Kelaseh checkpoint, from approaching Bostan al-Qasr corridor.

Terrorists’ cruelty and oppression against civilians in the Eastern districts of Aleppo has significantly increased, pushing people into escalation of uprising and clashes with the militants.

A field source in Aleppo Operations Room said on Tuesday that the Syrian Army will not give any other chance to Jeish al-Fatah terrorists and will start its final operation against militants’ positions in the Eastern part of Aleppo soon.

“Terrorist groups have refuted the entire terms of the ceasefire to pull back their forces from the Eastern Neighborhoods of Aleppo to maintain security of civilians. The militants are still using civilians as human shield and do not allow them to leave the Eastern parts of the city,” the source said.

“The 24-hour ultimatum of the Syrian army to the terrorists ended last night (Monday night), so the army’s operation will soon start. Reconnaissance planes have carried out tens of flights over the city and its countryside and specified the targets,” the source added.

(Footage released by the Russian Ministry of Defence, shows dozens of people on the streets of Bustan Al-Qasr, eastern Aleppo, in protest against anti-government forces withholding aid from civilians). 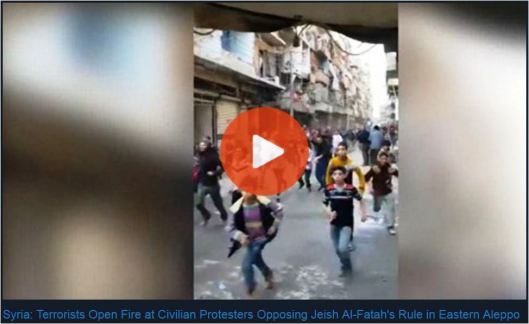