A unit of the Syrian Arab Army freed 19 civilians who had been abducted by ISIS (ISIL, Daesh, IS) mercenary-terrorists in the eastern countryside of Hama.

SANA reporter in Hama said that an army unit, in cooperation with popular defense groups, managed to free 19 civilians, including 5 children and 8 women, from ISIS on the outskirts of al-Sa’an town in Hama countryside.

The reporter added that all the abducted persons are from Idleb province and were kidnapped on October 11th when ISIS terrorists attacked a bus they were traveling by near al-Sa’an town.

The freed persons were transported by the army to Salamiyeh city, according to the reporter.

Syrian Army units secured the return of 26 kidnapped persons to al-Qaryatain city, who had been abducted by ISIS terrorists and used as human shields when the remnants of terrorists were fleeing from the city before the army regained control over it on October 21st.

A field commander said that the army observed a group of people coming from the area of Kahla Mount where its units were continuing the liberation of the city of al-Qaryatain and chasing ISIS remnants in the mountains surrounding the city, and then the army found out that the group consisted of locals who had been kidnapped by terrorists, adding that army secured the safety of the citizens and provided them with food and water.

The commander pointed out that the kidnapped persons managed to escape from the terrorists who took them to the mountains and forced them to work at gunpoint to transport food and money stolen by the terrorists from government facilities and shops in the city.

The commander added that the kidnapped persons talked about the crimes committed by ISIS against anyone who opposed them in al-Qaryatain under the pretext of apostasy from the Islamic religion, and they forced the abductees to transfer bodies to the orchards surrounding the city. 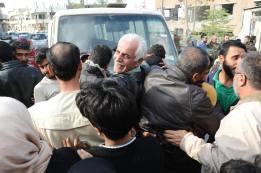 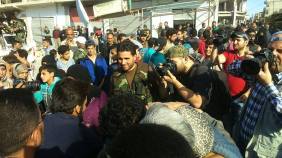